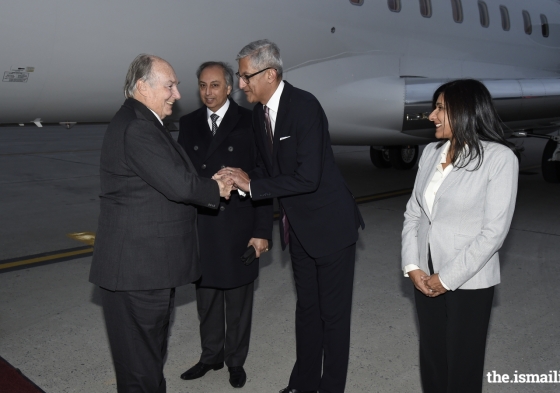 His Highness the Aga Khan arrived in Ottawa Tuesday, November 14, to begin his week long trip to Canada during which he will meet with his Ismaili followers in Eastern Canada for religious meetings in Toronto and Montreal.

He will however first preside over the inaugural Pluralism Award ceremony at the iconic Delegation of the Ismaili Imamat Building located on Sussex Drive. Readers will be able to watch the ceremony live on Wednesday, November 15, starting at 6 P.M. EST.

A short photographic tour of the Global Centre for Pluralism 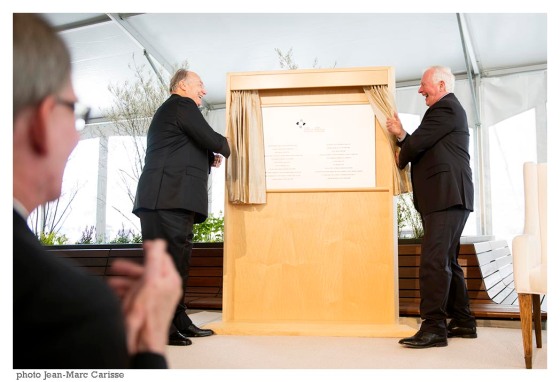 Flashback: The unveiling of the plaque by His Highness the Aga Khan and the former Governor General of Canada, David Johnston, during the inauguration ceremony of the building on May 16, 2017. The plaque is now embedded in the right wall, just inside the main entrance to the building. Photo: Jean-Marc Carisse.

In preparation for the press conference that was held yesterday (Tuesday, November 14), and this evening’s award ceremony, I decided to visit the Global Centre for Pluralism on Saturday, November 11, the last day the interior of the building was open for viewing by the public (it will reopen again next spring). 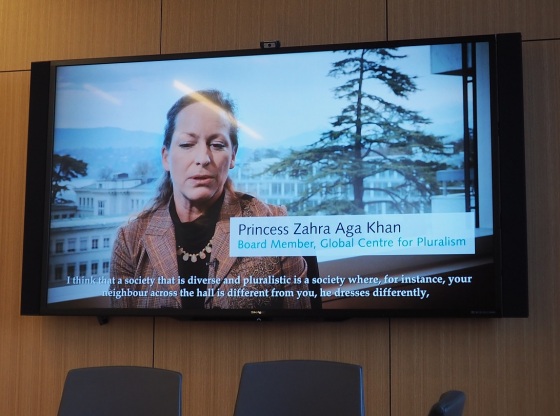 An immense transformation has taken place, while still preserving the historic features of the building. The Aga Khan during the official opening of the building on May 16, 2017, noted: “The architects, designers, engineers and so many others who have rehabilitated this wonderful Tudor Gothic building have taken enormous care to respect its distinctive historic character.” 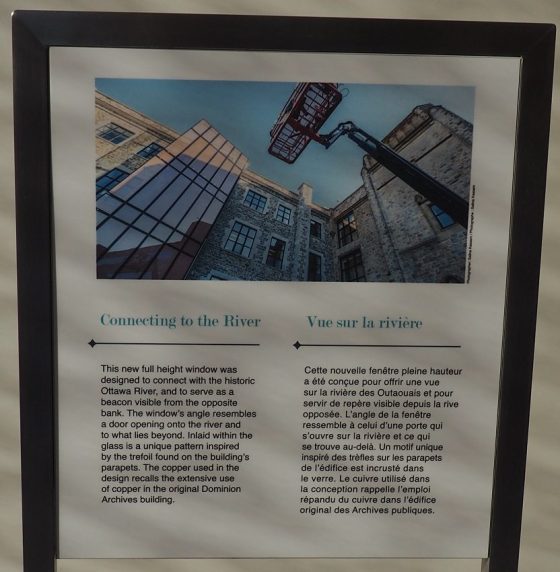 One of the major features that you are drawn to as you enter the building and climb its few steps is the large window that overlooks the Ottawa River. And the Aga Khan provided an insight on the topic too. In the same speech, he said:

“When I first visited this site, I went across the Ottawa River, to see things from the opposite side. From that perspective, I noticed that many buildings on the Ontario side had, over the years, turned their backs to the river. But as we began to plan, another possibility became evident. It seemed increasingly significant to open the site to the water.” This is precisely what the building offers every day to each person who walks in, perhaps with the thought: “Let me see the Ottawa River first.” 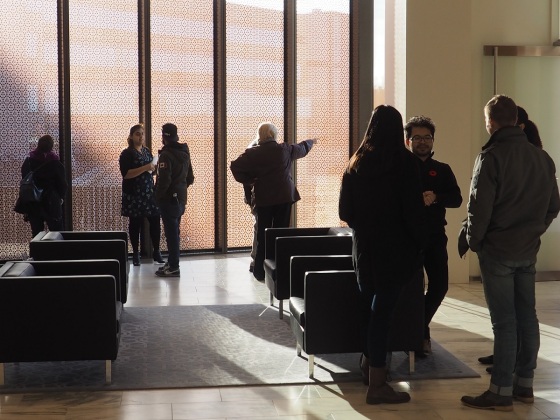 Visitors at the Global Centre on Saturday, November 11, 2017. One, far right end, is standing a few metres from the full-height window, and pointing to the Ottawa River, see next photo. Photo: Malik Merchant/Barakah/Simerg. 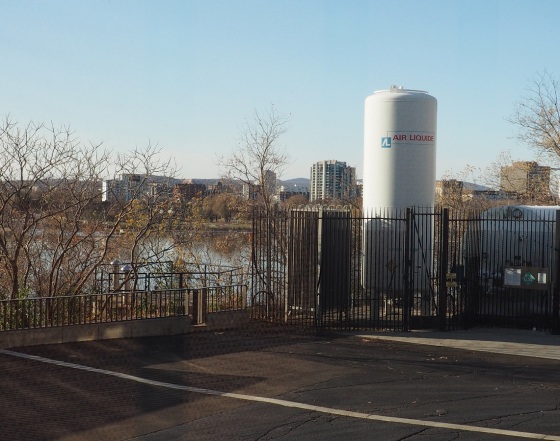 A beautiful view of the Ottawa River from the Global Centre’s full height window.See photo of plaque, above. Photo: Barakah/Simerg. 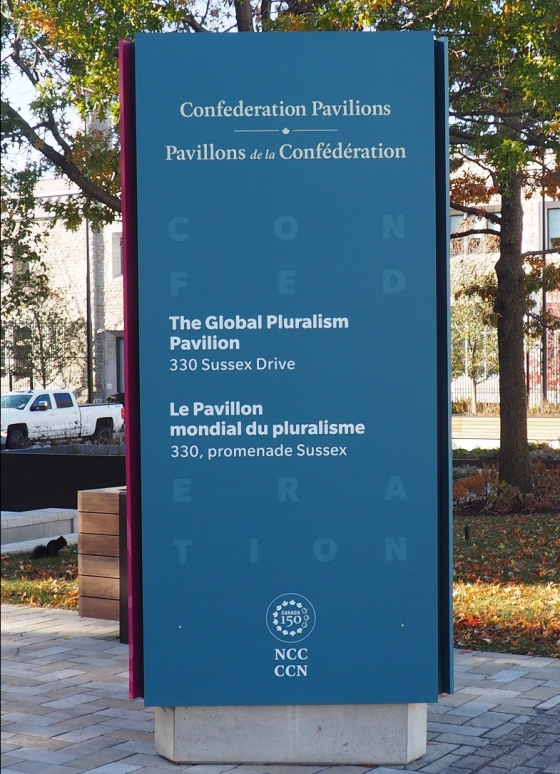 Global Centre for Pluralism was designated as one of 10 CONFEDERATION PAVILIONS, for 2017, the 150th anniversary of Canada. This plaque stands outside the building on Sussex Drive. Photo: Malik Merchant/Barakah/Simerg.

The Global Centre for Pluralism was designated as one of the 10 Confederation Pavilions in the National Capital Region for the year 2017. The Commission identified buildings that had been dormant and then brought back to life. A passport booklet highlighting all  the 10 buildings has been published, as shown in the next image. It encourages everyone to visit the buildings and experience them for their architectural heritage.

Bilingual front cover of the passport booklet, with an insert (English shown) on the Global Centre for Pluralism. Photo: Barakah/Simerg.

The Global Centre has been a National Historic Site since 1990, at which time it was the home of the Canadian War Museum. The PASSPORT booklet explains: “Today a $35 million investment from His Highness the Aga Khan has brought the building back to life as the new home of the Global Centre for Pluralism. This independent research and education centre, created in partnership with the Government of Canada, advances respect for diversity around the world. Become a pluralism champion; visit this heritage landmark, and explore the mission and work of the Centre.” 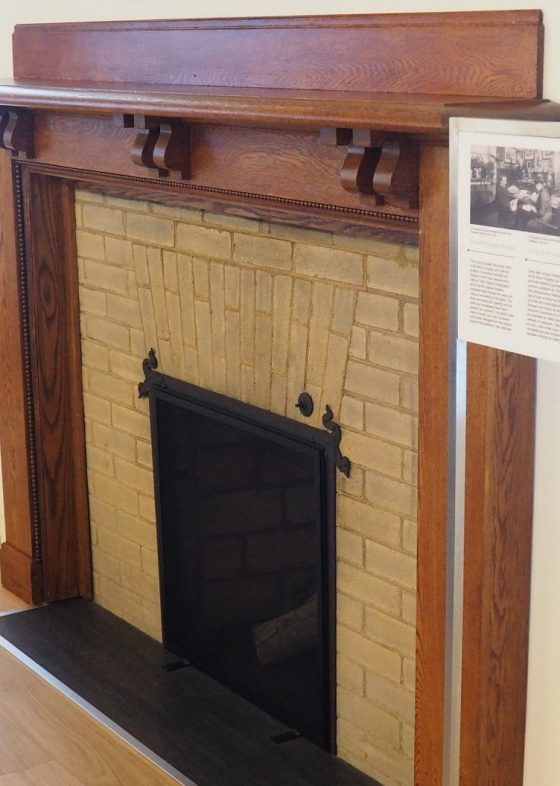 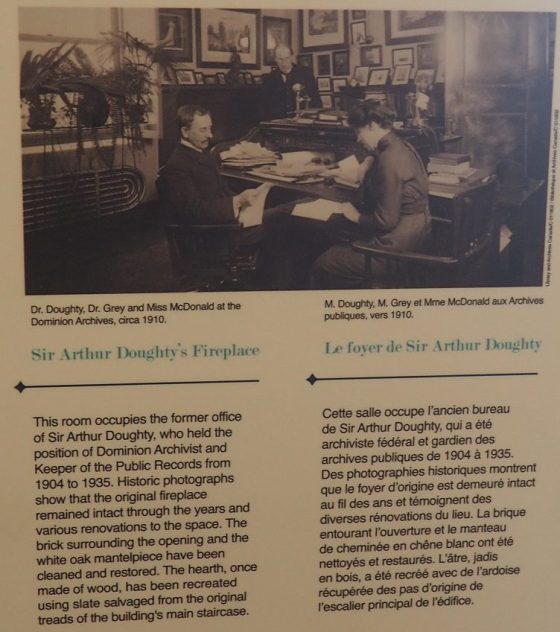 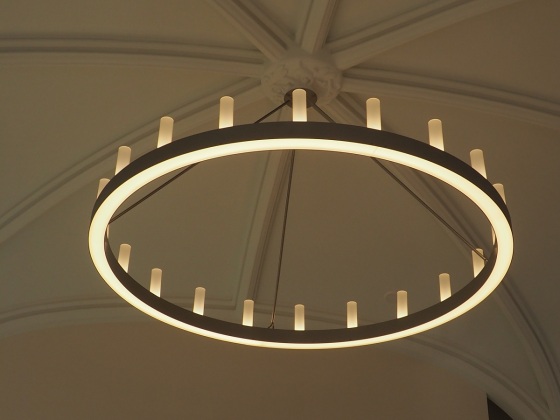 Chandelier in the hall by the main entrance. Photo: Malik Merchant/Barakah/Simerg. 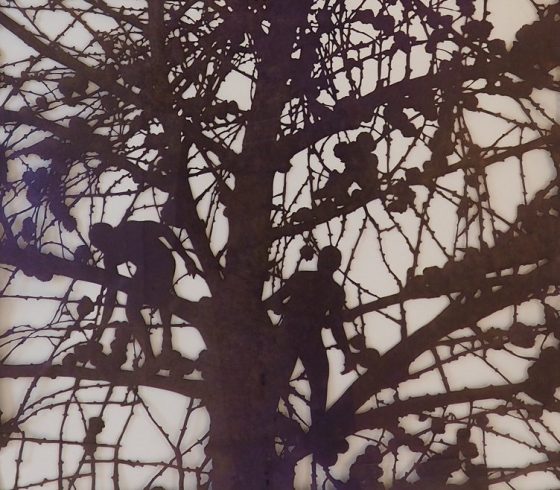 A segment of a drawing, “Invincible before daybreak”, by Edward Pien (2007). Photo: Malik Merchant/Barakah/Simerg. 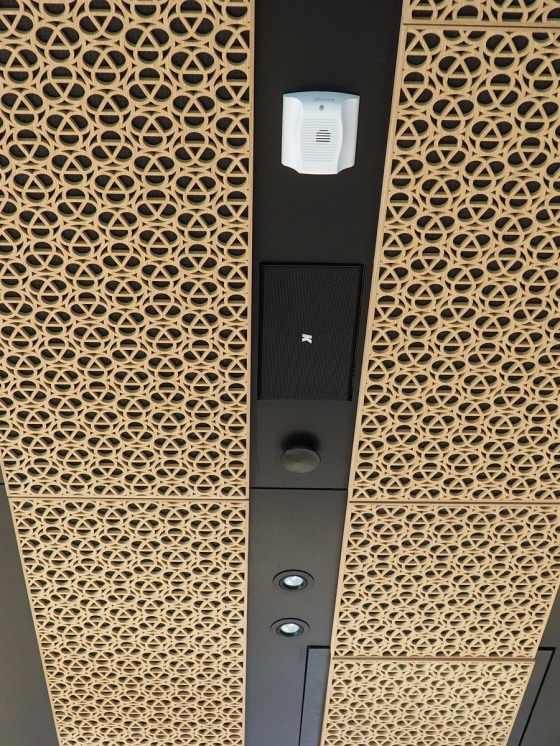 A segment of a painting symbolizing past indigenous injustices. Photo: Malik Merchant/Barakah/Simerg. 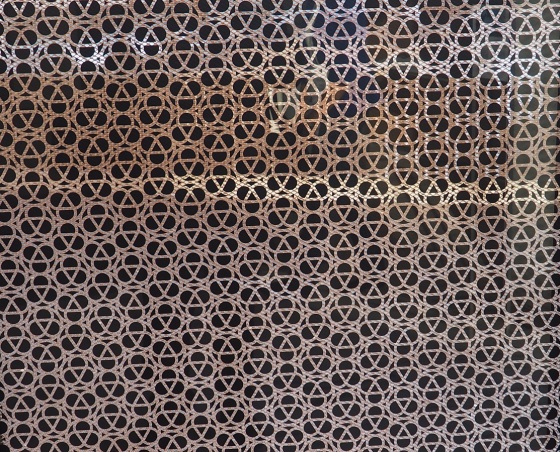 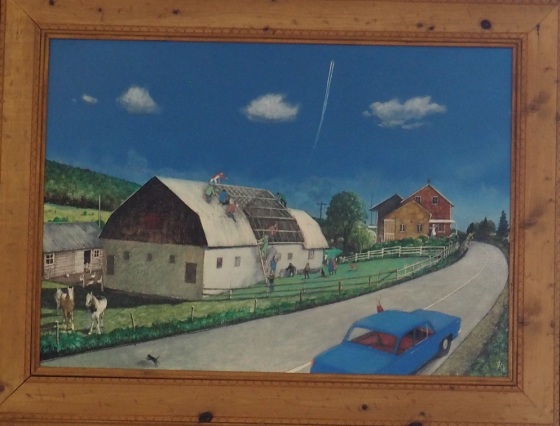 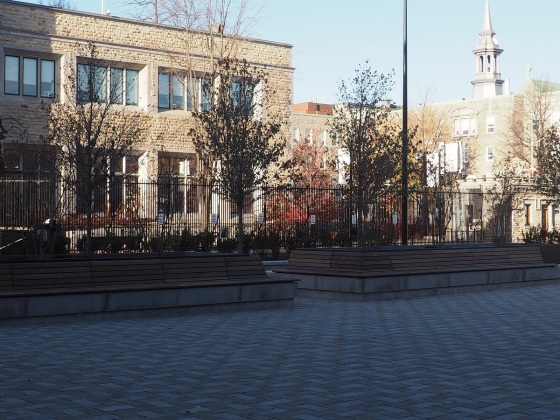 Contemplative garden. The Aga Khan in referring to this exterior space said, “a new garden in the forecourt, a tranquil space for contemplating the past and thinking about the future.” Background building is the Royal Canadian Mint. Photo: Malik Merchant/Barakah/Simerg. 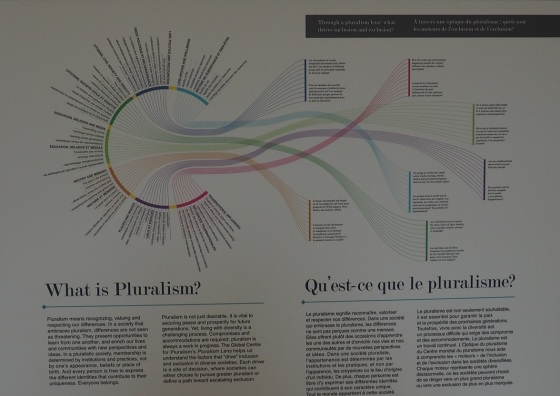 A colourful plaque on wall explaining pluralism in all its aspects. Photo: Malik Merchant/Barakah/Simerg. 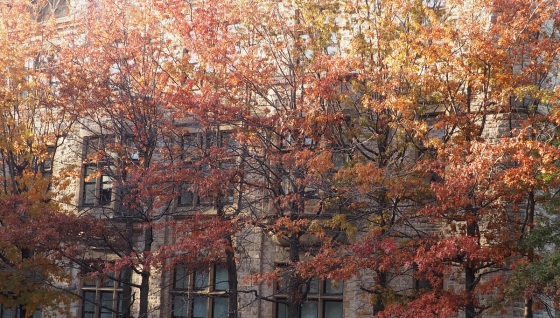 The last of the beautiful fall colours shading the Global Centre for Pluralism on November 11, in a delayed autumn foliage. Photo: Malik Merchant/Barakh/Simerg.

Press Conference with winners of the 2017 Pluralism Award 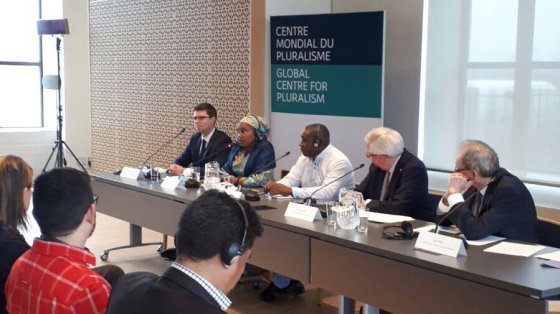 Members of the media were invited on Tuesday morning for an hour long press conference at the Global Centre for Pluralism to meet with the winners of the first Pluralism Award. The opening remarks by the Centre’s Secretary General John McNee were followed by the introduction of each of the 3 winners by the Rt. Hon. Joe Clark, Canada’s former Prime Minister. Mr. Clarke headed the jury that selected the 3 winners and 7 other honourable mentions from over 200 nominations that were submitted in 43 different countries.

Leyner Palacios Asprilla: The humble and courageous activist Leyner Asprilla of Colombia spoke about the the terrible massacre in May 2002 when the Revolutionary Armed Forces of Colombia, the guerilla movement known with the Spanish acronym FARC, launched gas cylinder bombs at a church in Bojayá full of civilians that was being used as a human shield by a paramilitary group. The bombs bursted the church killing 79 people including 48 infants and children. Asprilla survived the massacre but he emerged to find that 32 of his family members had been killed. Instead of becoming despondent over this cruel tragedy, Asprilla went on to found the Committee for the Rights of Victims of Bojayá, giving voice to over 11,000 victims of the conflict that live in the municipality of Bojayá, Chocó. As a result of his fight for social justice, Leyner was asked to represent Bojayá massacre victims during peace negotiations between guerilla forces and the government. One of the results was that FARC publicly acknowledged their role in the 2002 tragedy and, in a private ceremony in a Bojayá church, requested forgiveness. 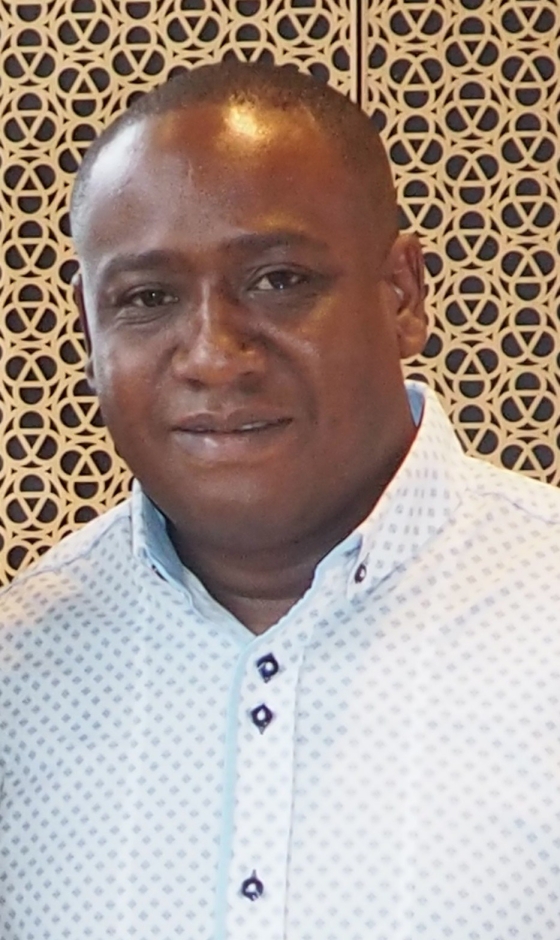 Asprilla organized assemblies with representatives from every community in Bojayá, even the most remote, and encouraged each community to include a female representative. Now, these remote communities have a united voice that takes their demand for human rights to the highest levels of government, and around the world. By bringing communities together in the fight for social justice, Leyner realized how powerful a chorus of diverse voices can be. Today, he continues to demand that Colombia embrace diversity by respecting the rights of all its citizens, particularly its most marginalized. 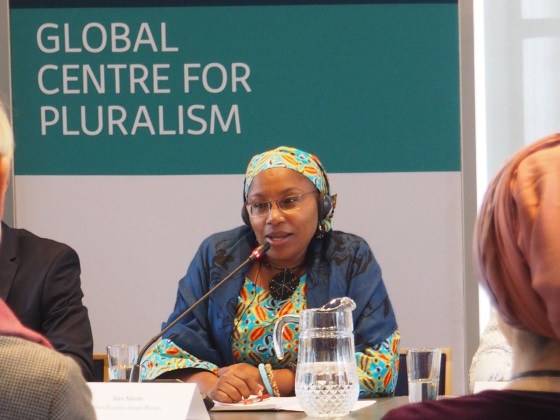 Alice Wairimu Nderitu: The graceful Alice Nderitu of Kenya has been a tireless peacemaker, conflict mediator and gender equality advocate who believes that differences can be strengths, not weaknesses. She took a seat at the peace table with 100 elders from ten ethnic communities who had never negotiated peace with each other before. This was 18 months after violence erupted in Kenya’s Rift Valley when results of a flawed election were announced which ignited historic grievances over land and deep-seated ethnic tensions. As a child eavesdropping in a tree, Alice was told that as a woman she could not participate in the work of making peace. But Alice took her place at the table with male mediators and led the elders in a dialogue that resulted in the region’s first peaceful elections in 20 years Today, as a lead mediator brokering peace throughout Africa, she has proven again and again that making peace is very much women’s business; however she explained that she found it necessary to integrate attitudes generally reserved for man! 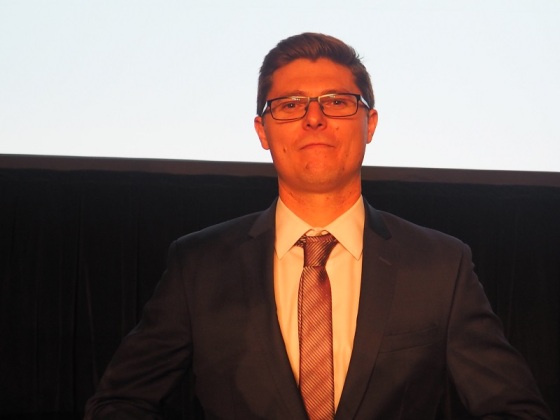 Daniel Webb: The narrative by the articulate Australian Daniel Webb, a lawyer by training, was forceful. He was severely critical of the Australian Government for its decision to place every refugee arriving in boat in Australia’s offshore detention center on Manus Island, Papua New Guinea. The conditions in these detention centres are inhumane and demoralizing, with numerous reports of violence, medical neglect, suicide, self-harm. When Daniel visited the island he met many refugees and found out that they were inspiring people who could make great contributions to Australian society, if only given the chance to live on the mainland.

To tackle the offshore detention issue in Australia, Daniel has developed an innovative approach that combines legal action, media advocacy, public campaigns and United Nations engagement. Daniel’s work has helped to hold the Australian government accountable for breaches in international law. His work has not stopped there. He realized he needed to change the public perception of people seeking asylum. Australians had to understand that the people detained offshore were not threats, but rather human beings with their own stories, talents and families.

In addition to hearing stories of Leyner, Alice and Daniel, the media was also briefed about seven other individuals and corporations who received honourable mentions.

Note: Another version of this post, with enlarged photos, can be read at http://www.barakah.com

One thought on “Aga Khan arrives, a photo tour of the Global Centre for Pluralism and more” 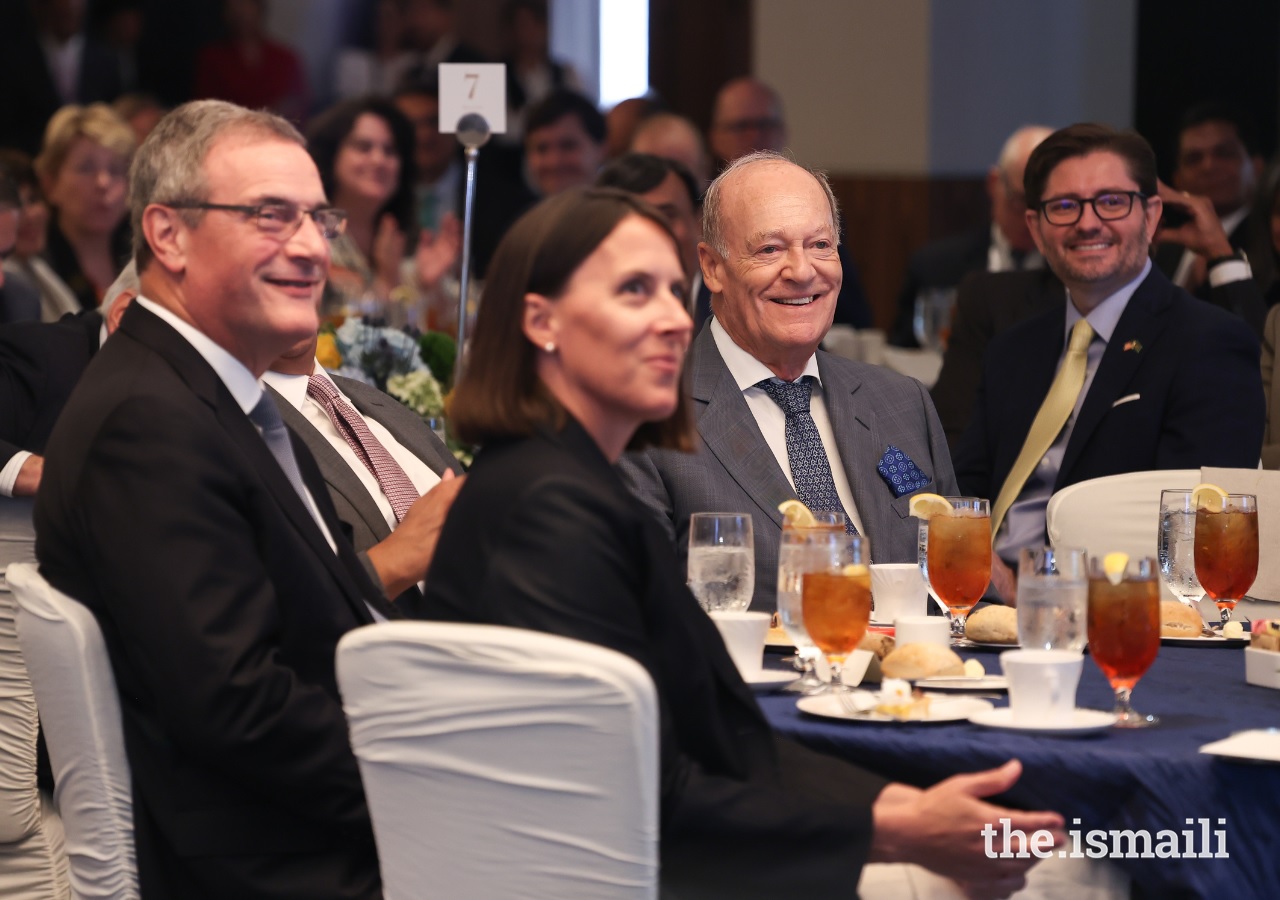 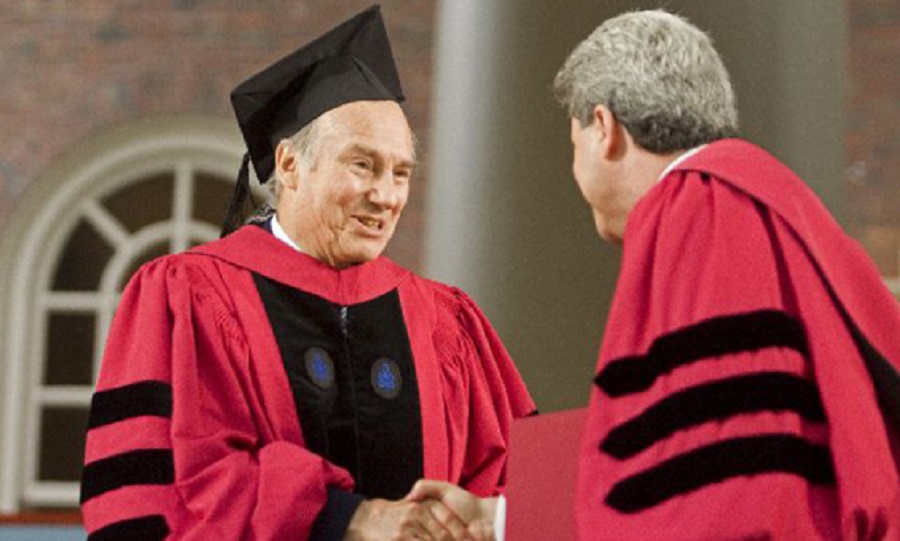 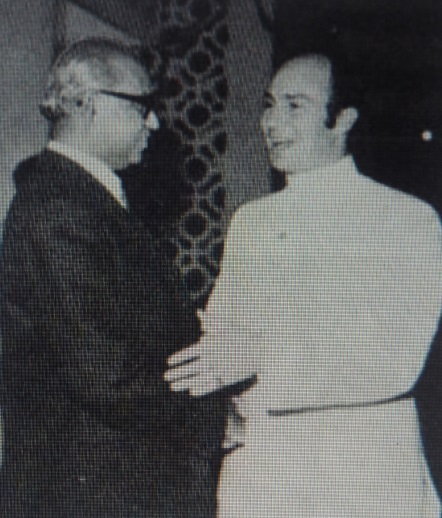 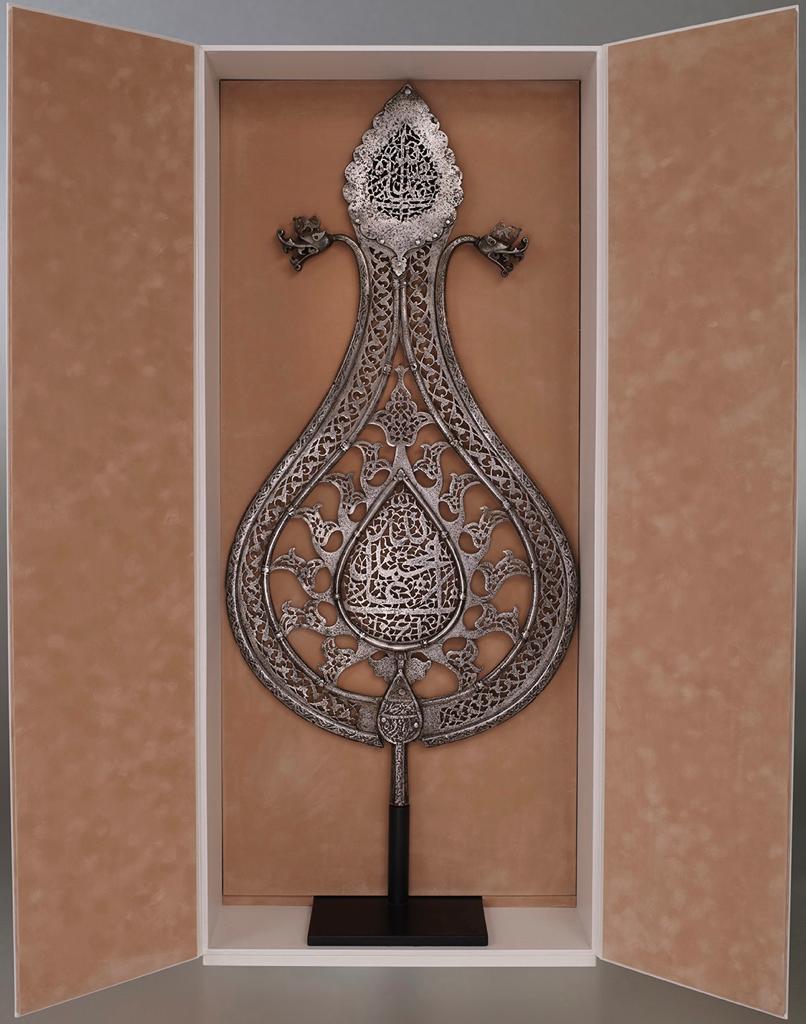 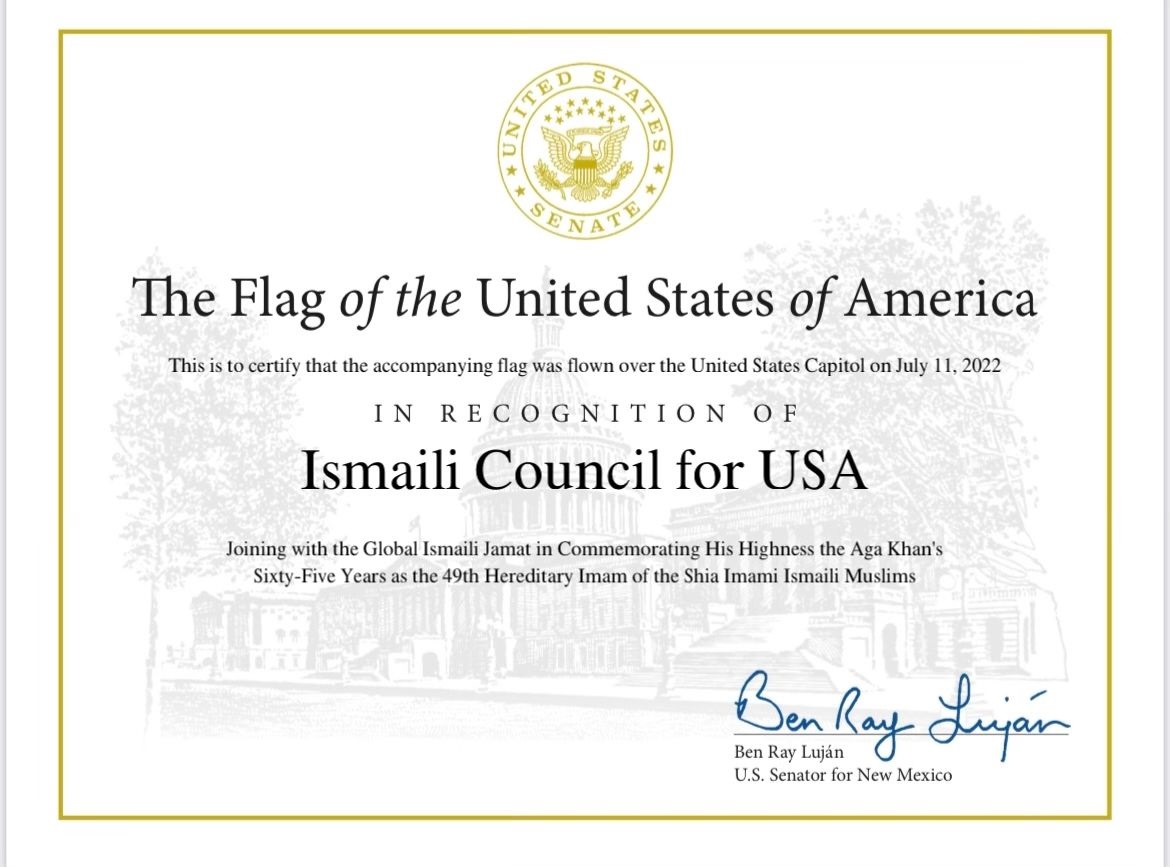