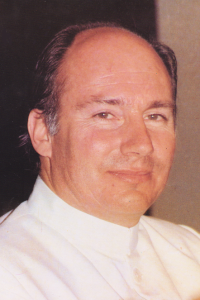 A portrait of His Highness the Aga Khan. Jehangir Merchant Collection.

…Rich in parable and allegory, metaphor and symbol, [the discourse of the Qur’an-e-Sharif] has been an inexhaustible well-spring of inspiration, lending itself to a wide spectrum of interpretations. This freedom of interpretation is a generosity which the Qur’an confers upon all believers, uniting them in the conviction that All-Merciful Allah will forgive them if they err in their sincere attempts to understand His word. Happily, as a result, the Holy Book continues to guide and illuminate the thought and conduct of Muslims belonging to different communities of interpretation and spiritual affiliation, from century to century, in diverse cultural environments.

The Noble Qur’an extends its principle of pluralism also to adherents of other faiths. It affirms that each has a direction and path to which they turn so that all should strive for good works, in the belief that, wheresoever they may be, Allah will bring them together.

Tradition honours the vocation of the learned scholars who are gathered here for this colloquium. The Qur’an itself acknowledges that people upon whom wisdom has been bestowed are the recipients of abundant good; they are the exalted ones. Hence Islam’s consistent encouragement to Muslim men and women to seek knowledge wherever it is to be found. We are all familiar that al-Kindi, even in the 9th century, saw no shame in acknowledging and assimilating the truth, whatever its source. He argued that truth never abases, but only ennobles its seeker. Poetising the Prophet’s teaching, Nasir Khusraw, the 11th century Iranian poet-philosopher, also extols the virtue of knowledge. For him, true jihad is the war that must be waged against the perpetrators of bigotry, through spreading knowledge that dispels the darkness of ignorance and nourishes the seed of peace that is innately embedded in the human soul.

This colloquium covers a range of Muslim expressions in the Arts, across time and space. Some among the eminent scholars present today have observed that, while the Qur’an may not propound a doctrine of Islamic art or material culture, it does offer imaginative scope in this direction. From early on, its passages have inspired works of art and architecture, and shaped attitudes and norms that have guided the development of Muslim artistic traditions.

In this context, would it not also be relevant to consider how, above all, it has been the Qur’anic notion of the universe as an expression of Allah’s will and creation that has inspired, in diverse Muslim communities, generations of artists, scientists and philosophers?

Scientific pursuits, philosophic inquiry and artistic endeavour are all seen as the response of the faithful to the recurring call of the Qur’an to ponder the creation as a way to understand Allah’s benevolent majesty. As Sura al-Baqara proclaims: ‘Wherever you turn, there is the face of Allah’.

Does not the Qur’an challenge the artist, as much as the mystic, to go beyond the physical – the outward – so as to seek to unveil that which lies at the centre but gives life to the periphery? Is not a great work of art, like the ecstasy of the mystic, a gesture of the spirit, a stirring of the soul that comes from the attempt to experience a glimpse of, and an intimacy with, that which is ineffable and beyond being?

The famous verse of ‘light’ in the Qur’an, the Ayat al-Nur, whose first line is rendered here in the mural behind me, inspires among Muslims a reflection on the sacred, the transcendent. It hints at a cosmos full of signs and symbols that evoke the perfection of Allah’s creation and mercy.

…It is my sincere hope that this colloquium will bring additional insights to an understanding of the Holy Qur’an as a message that encompasses the entirety of human existence and effort. It is concerned with the salvation of the soul, but commensurately also with the ethical imperatives which sustain an equitable social order. The Qur’an’s is an inclusive vision of society that gives primacy to nobility of conduct. It speaks of differences of language and colour as a divine sign of mercy and a portent for people of knowledge to reflect upon.

Ours is a time when knowledge and information are expanding at an accelerating and, perhaps, unsettling pace. There exists, therefore, an unprecedented capacity for improving the human condition. And yet, ills such as abject poverty and ignorance, and the conflicts these breed, continue to afflict the world.

The Qur’an addresses this challenge eloquently. The power of its message is reflected in its gracious disposition to differences of interpretation; its respect for other faiths and societies; its affirmation of the primacy of the intellect; its insistence that knowledge is worthy when it is used to serve Allah’s creation; and, above all, its emphasis on our common humanity.

The above excerpts are from the speech delivered by His Highness the Aga Khan at the Ismaili Centre, London, on October 19, 2003. To read the full transcript and watch His Highness delivering the speech, please click Word of God.

Please also click Seeking the Forgiveness of the Imam of the Time: A Short Explanation, published for Lailat al-Qadr (2011).