As a journalist, a writer and an author, what better time to be than reporting milestones and significant events during the Fatimid Period or the “Golden Age” of Ismailism, when Ismaili Imams ruled over a vast empire and when Ismaili literature, philosophy and law flourished. It was during the Fatimid Period that the Ismaili scholars and authors produced what were to become the classic texts of Ismaili literature dealing with a multitude of exoteric and esoteric subjects. I think I might have made Ismaili fiqh (jurisprudence) my area of specialization, because it had not existed during the pre-Fatimid period. It was codified and became catalogued during the early Fatimid period. It was during the Fatimid period that Ismailis made their important contributions to Islamic theology and philosophy in general and to Shia thought in particular. Modern recovery of Ismaili literature clearly attests to the richness and diversity of the literary and intellectual traditions of the Ismailis.

Egypt became the center of the Fatimid empire that included at its peak North Africa, Sicily, Palestine, Lebanon, Syria, the Red Sea coast of Africa, Yemen and the Hejaz. Egypt flourished as the Fatimids developed an extensive trade and diplomatic network and ties which extended all the way to China. Map: Wikipedia; click to enlarge

But, I think, for me of all the events that I would have reported, there are a number of related incidents that stand out, and which I would have liked to witness in the company of Imam Muizz’s trusted commander, Jawhar al-Siqilli. He was of Sicilian descent.

He had been entrusted by the Imam to conquer Egypt. With a 100,000 men assembled and equipped at a cost of 24 million dinars, he set out for Egypt on February 5th, 969.

Embedded I would be, like the modern journalists in this vast army, alongside my hero! The road to Egypt had been well ascertained, forts had been built through the route at specific places. Jawhar was carrying with him a thousand caskets filled with silver. Camels carried gold ingots in plain sight, cast in the shape of millstones, to impress the crowds and the local peoples through which the army passed. Then four months later, in June of the same year, I would arrive with Jawhar in Egypt, and hardly witness any resistance!

As the first measures after the conquest, I see him issue a proclamation promising financial reforms and an end to injustice. He reached out to Sunnis, Jews and Christians and offered them protection.

Then I had been with him as he crossed the Nile, and on July 6 of the same year, he marched through Fustat, and established himself north of the city in the plain that would become his new capital – a capital that Imam Muizz had expressed a wish would rule the world.

This site was empty except for a monastery and a castle. On the very night of Jawhar’s arrival in this empty spot, I would have seen the Sicilian mark the perimeter of the city with wooden stakes strung together with belled ropes. A crow would land on the rope and set the bells jingling. The ground breaking work would commence at that spot for what would eventually become known as al-Qahira (“The Triumphant”). I would see the birth of what is now modern Cairo!

But the epochal incident, the Grand Darbar, would come four years later. During this interim time I would see Jawhar establish the new capital, pacify the provinces, institute financial reform, defeat the Qarmats in December 971, and introduce new religious observances in conformity with the Shia Ismaili faith. This would include a call to prayers containing the Shiite invitation to “come to the best prayer.”

Now that all had been done, no further time would be spent. There was nothing left to do but to invite Imam al-Muizz.

In 973, the Imam leaves the Maghreb on his way to Egypt with his sons and relatives with him, along with coffins of his ancestors. One of his stops is Alexandria, where the Imam resolves to dedicate his life in the exercise of good works. He then preaches to them in a manner which draws tears from many who are present.

He departs after spending three days in Alexandria, and on June 6, 973, he reaches a place known as Mina. Jawhar is there to receive him. I see him go forth to meet his master and I witness him drawing near the Imam, dismounting from his horse and kissing the ground before the Imam in a show of loyalty, humility and submission to the Amirul Muminin. This is affection and love for the Imam I see at the highest and deepest level. It is a profound experience and a joy to behold, which I would report.

The Imam would then cross the Nile on the Rawdah bridge, bypass Fustat, and proceed straight to Cairo and take possession of the palace or fort that Jawhar had constructed for the Imam.

It is Ramadhan – year AH 362. The feast marking its end is underway. I’d see Imam Muizz conduct his prayers at the new mosque in Cairo, and then ascend the pulpit to give his sermon, with Jawhar on the steps of the pulpit. I would feel the emotions as the crowds weep and sob at hearing the Imam’s sermon.

Outside, the Imam would then mount his horse surrounded by his four armoured and helmeted sons, while two elephants led the procession. Destination – the fort, and I on my heels to get there for the Darbar!

Then, at the fort, all the citizens eagerly await to pay their allegiance to the new Caliph. Jawhar would be within my sight, and very close to the Imam, to his right.

I would witness the Imam majestically seated on his golden throne as he received all the nobles, Qadis, Vazirs and Ulemas of his city. They would present the Imam with their beautiful gifts as well as a robe made from a rare yarn that is known to grow only in Tunis. The material has a special shine and is gilded with gold and silver. The Imam would then be presented a Turban of a similar material and he would adorn the robe and the Turban. A resplendent Darbar for me to record and report as a journalist!

My friend, Jawhar, would get his turn. I would see him present the Imam, al-Muizz, with the best breed of 150 horses gilded with saddles and bridles of gold and diamonds as well as camels and ponies, saddled with boxes filled with all rare items in Egypt.

Then the Imam Muizz in a remarkable gesture of magnanimity and forgiveness would announce the release of about 1000 of his prisoners and present robes and Khalat to all his nobles and officers.

Would Jawhar be forgotten in the sight of the Imam? No. I would be exuberant to see my beloved Imam’s immense love for someone responsible for conquering Egypt some four years earlier. Jawhar would be honoured as he is presented with a golden Khalat and a turban. Imam Muizz then would tie a sword on Jawhar’s waist and present him with 20 horses with golden saddles, 50 thousand dinars and 200,000 dirhams.

With this Darbar, Egypt and Cairo enter a new era that would last almost two centuries and constitute one of the most brilliant periods in Ismaili history and Islamic Civilization.

Indeed a monumental and epochal event to witness and report! What a story and I Wish I’d Been There with Jawhar. 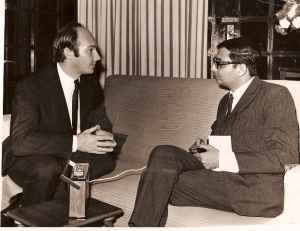 About the Writer: Mansoor Ladha is an award-winning journalist based in Calgary, Canada. He has held several senior editorial positions with daily and weekly newspapers in Canada, Kenya and Tanzania, which included the Edmonton Journal, Morinville Mirror, Redwater Tribune, Daily Nation, Kenya,  and Daily News, Tanzania. Currently, he freelances for the Calgary Herald, the Vancouver Sun, and the Calgary Senior newspapers and travel magazines. He has also published a book entitled A Portrait in Pluralism: Aga Khan’s Shia Ismaili Muslims and is currently working on memoirs on his life in East Africa and in Canada. Last year, he was one of the several writers, scholars and journalists invited to contribute a chapter in the book called, The Story That Brought Me Here. He has served on several public and voluntary bodies in Canada. His complete profile can be viewed on his Web site www.mansoorladha.ca.

2. We welcome feedback/letters from our readers. Please use the LEAVE A REPLY box which appears at the bottom of this page, or email it to simerg@aol.com. Your feedback may be edited for length and brevity, and is subject to moderation. We are unable to acknowledge unpublished letters.

Also note: Cairo map shown is from this book

4 thoughts on “His Name is Jawhar”