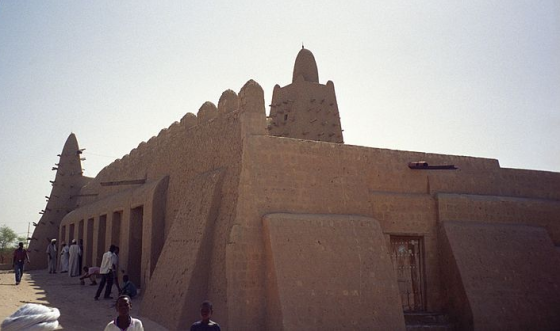 Djinguereber mosque in Timbuktu, Mali, where members of of the Ansar Dine have destroyed some of the mosque’s mausoleums, along with other holy shrines in the ancient northern city. They used hoes, pick-axes and chisels, hammering away at the earthen tombs until they were completely destroyed. Photo: Wikipedia.

History dating as far back as the 5th century is literally being chipped away with pick axes and shovels at the hands of an extremist rebel faction in northern Mali. Holy Muslim shrines in the ancient city of Timbuktu have become targets of the Ansar Dine. For the Islamist faction, the Sufi shrines are a form of idolatry.

But for many others in the overwhelmingly Muslim country, the mausoleums of Islamic saints are religiously significant, and regularly draw crowds of people, including Muslims preparing for the Hajj, or pilgrimage, to Mecca. These ancient buildings and monuments — some listed by the UN Educational, Scientific and Cultural Organization (UNESCO) as World Heritage Sites — are also an integral part of world history and the collective memory of the people of Mali. Timbuktu was an intellectual and spiritual capital that played an essential part in the spread of Islam across Africa’s Sahara and Sahel in the 15th and 16th centuries.

A number of Timbuktu’s sacred tombs are now gone, reduced to piles of rubble….(Article continues after His Highness the Aga Khan’s speech excerpts)

THE HARMONIZATION OF INTELLECT AND FAITH 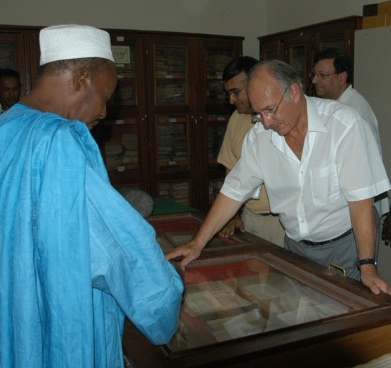 His Highness the Aga Khan examining ancient manuscripts at the Ahmed Baba Centre in Timbuktu, during his visit to Mali in October 2003. Researchers believe there are as many as 30,000 manuscripts in northern Mali, dealing with religion, history, philosophy, astronomy, astrology, numerology, biology, geography, grammar, literature, medicine, mathematics, Islamic law and more. Photo: AKDN/Gary Otte

For a thousand years, Timbuktu has been a town noted for its hospitality. Here, the desert and the River Niger converge and travellers arriving from across the Sahara have found a friendly welcome and an environment of knowledge and profound faith, as well as a cosmopolitan culture.

Today, I feel honoured and proud to belong to this town which has made a lasting contribution to the enrichment of Islam and world civilisation….I am also very happy to accept the degree of Doctor Honoris Causa from the prestigious University of Sankoré, the African continent’s most ancient higher education institution. Like Djingareyber and Sidi Yahya, this university has been the alma mater of the town’s 180 Qu’ranic schools and the birthplace of the many scholarly works which became uniquely influential in Africa during the Middle Ages. The sum of all that knowledge has been preserved in the richly-stocked libraries of Timbuktu which house thousands of manuscripts, most of them written by scholars born in the town. This tradition of learning and the transmission of knowledge is at the heart of Islam and the practice of the faith.

I am delighted to receive this degree in such a prestigious centre of Islamic erudition, facing the historic Djingareyber Mosque built in the 14th century in the reign of Emperor Mansa Kankou Moussa by the architect Abu Ishaq as-Saheli.

I shall always remember this honorary doctorate as proof of the harmony between intellect and faith which is Islam’s blessing to Muslims…..His Highness the Aga Khan, Timbuktu, Mali, 24 April, 2008

Still in danger are the pyramidal structures of the Tomb of Askia, as well as other religious and cultural artifacts, including 1,000-year-old Islamic manuscripts. The manuscripts — a testimony to Africa’s written history — are specific to West Africa and unique in the Islamic world.

The United Nations has now placed Timbuktu and the Tomb of Askia on its List of World Heritage in Danger. Ansar Dine’s threats to destroy more have brought Fadima Diallo, Mali’s minister of culture, to tears. The African Union called its actions “criminal.” The new chief prosecutor of the International Criminal Court, Fatou Bensouda of Gambia, has warned that her office will open an investigation into what she calls “war crimes,” under the Hague Convention of 1954 for the Protection of Cultural Property in the Event of Armed Conflict.

“If you destroy the library, it’s all gone. Everything. Our history, our cultural heritage, our identity. It would mean total loss.” – an expert at the Islamic Research Library in Timbuktu, quoted by Philipp Hedemann in an article in DIE WELT/Worldcrunch

The destruction in the fabled city follows a deepening crisis in the region since a military coup in Mali’s capital in March. Separatist Tuareg rebels took advantage of the instability to proclaim northern Mali an independent state. The Ansar Dine (“Protector of the Faith”) then in turn ousted the Tuareg rebels and took control of Timbuktu.

For hundreds of years, Timbuktu has endured every major upheaval thrown its way: foreign invasions, armed raids, an earthquake, famine. Africa and the world are hoping that it will survive the current threat.

Jocelyne Sambira is a staff writer with AfricaRenewal Magazine, a publication of the United Nations Department of Public Information. Interested readers may obtain a free subscription to the magazine’s print edition by writing to africarenewal@un.org. Selected articles from the printed version can be read on-line at www.un.org/africarenewal.

Articles on external websites worth reading:

Huffington Post: Timbuktu – The Ink of the Scholar and the Blood of the Martyrs
DIE WELT/Worldcrunch: Timbuktu – Protecting Priceless Manuscripts from Senseless Destruction
Akdn.org: Speech of His Highness the Aga Khan

We welcome feedback/letters from our readers. Please use the LEAVE A REPLY box which appears below. Your feedback may be edited for length and brevity, and is subject to moderation. We are unable to acknowledge unpublished letters. Share this article with others via the share option below. Please visit the Simerg Home page for links to articles posted most recently. For links to articles posted on this Web site since its launch in March 2009, please click What’s New. Sign-up for blog subscription at top right of this page.

One thought on “Under Siege: Timbuktu, Mali’s Fabled ‘City of Saints’”