The thoughtful study of the late Aga Khan, 48th Imam of Shia Imami Ismailis, shown above was done in clay by his wife, the Begum Aga Khan, Om Habiba. Image by © Bettmann/CORBIS

In his Platinum Jubilee message, shown in the above quote, Sir Sultan Muhammad Shah, Aga Khan III, had exhorted his Ismaili followers to “show their true Islamic charity in thought and prayers for the benefit and happiness of all Muslims.” The beloved 48th Imam passed away two years later on July 11, 1957, after a reign of seventy two years, but not before giving his followers these and other thoughtful words to live by.

That the late Aga Khan was  “a great force working for understanding and harmony between east and west”, as noted by The Times of London, is shown by the following messages of universal appeal that he conveyed:

“All men, rich and poor, must aid one another materially and personally. This fraternity is absolute, and it comprises men of all colours and all races: black, white, yellow, tawny; all are the sons of Adam in the flesh and all carry in them spark of the Divine Light. Everyone should strive his best to see that this spark be not extinguished but rather developed to that full Companionship- on-High.”

To the Ismailis, in addition to the above Platinum Jubilee message, he made the following passionate plea:

“It is my hope that my spiritual children, the Ismailis, will, by example of their own higher enlightenment and co-operative movement amongst themselves set to the world an example of better fraternity and brotherhood which alone can free men from the fear and dangers of moral and mental discord which leads to disaster for all.”

September 1885: The 7-year-old Aga Khan III at his enthronement ceremony as 48th Imam of the Shia Ismaili Ismaili Muslims in Bombay. He is surrounded by community elders and seated on the oblong wooden throne. Photo: Keystone/Hulton Archive/Getty Images, Copyright

The Aga Khan’s death was mourned by people of all communities around the world. For his followers the loss of their long reigning Imam became an occasion to reflect about their traditional and historical understanding and belief about the Institution that he had led – the Imamat.  During this mourning and trying period the  famous tradition (Hadith) of the Prophet Muhammad:

“I am leaving behind me two things: the Book and my Progeny. If you hold fast to them, you will never go astray,”

“Verily, God did choose Adam and Noah, the progeny of Abraham, and the progeny of Imran above all the worlds, descendants, one from the other: And God heareth and knoweth all things.”

became comforting factors as Ismailis globally awaited the announcement of who had been designated to continue the hereditary Imamat.

The will of their beloved Imam was then read in front of the Imam’s family at Villa Barakat proclaiming the successor. It said:

Ever since the time of my first ancestor Ali, the first Imam, that is to say over a period of thirteen hundred years it has always been the tradition of our family that each Imam chooses his successor at his absolute and unfettered discretion from amongst any of his descendants whether they be sons or remoter male issue.

In view of the fundamentally altered conditions in the world in very recent years due to the great changes which have taken place including the discoveries of atomic science I am convinced that it is in the best interests of the Shia Moslem Ismailian Community that I should be succeeded by a young man who has been brought up and developed during recent years and in the midst of the new age and who brings a new outlook on life to his office as Imam.

I appoint my grandson Karim, the son of my son Aly Salomone Khan to succeed to the title of Aga Khan and to be the Imam and Pir of all my Shia Ismailian followers.

July 12, 1957: The newly enthroned 49th Imam, Shah Karim al-Hussaini, surrounded by Ismaili leaders and their spouses at Villa Barakat. (See feedback below for individuals who have been identified in this historical photo – ed.)

Through the special designation (or the Nass) of the late Imam, Shah Karim al-Hussaini became the 49th hereditary Imam of the Nizari Ismailis at the age of twenty.

Shortly after, the newly enthroned Imam met Ismaili leaders and representatives from around the world, and also made the following statement:

My grandfather dedicated his life to the Imamat and Islam, both of which came first, and above all other considerations. While I was prepared that one day I might be designated the Aga Khan I did not expect it so soon. I follow a great man in a great responsibility and he could have given me no more appreciated honour than to bequeath me this spiritual leadership. My life, as his, will be dedicated to the service of my followers.

During the course of 2010, Simerg looks forward to publishing a series of articles about the  monumental achievements of Shah Karim al-Hussaini, Aga  Khan IV. 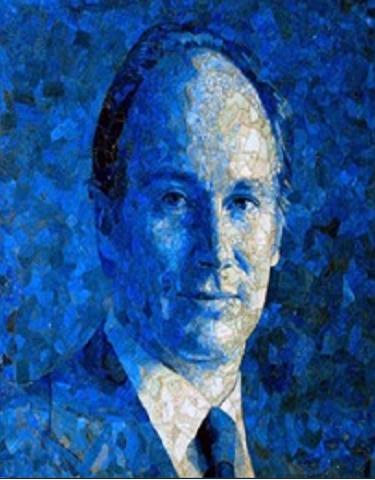 Shown above is a mosaic portrait in lapis-lazuli of His Highness the Aga Khan, made by the late Pakistani Ismaili artist, Gulgee. Photo Source: Ismailimail.wordpress.com

To submit comment or read feedback, scroll to bottom of page.

1. Links to articles in the Aga Khan III series are provided below. Please also see What’s New page for all articles posted on this website (by date). Or go to Home page.

2. All photos shown above which are noted as copyright are published on this website under a licensing agreement with the copyright owners,  Getty Images and Corbis.  Please do not reproduce these photos without obtaining permission from these photo libraries.

3. The lapis-lazuli mosaic of His Highness the Aga Khan has been enlarged from a smaller version available at Ismailimail.wordpress.com.  A brief  – but interesting – note about  the method the late Gulgee used to produce the mosaic  is provided at the bottom of this page.

Preview Films of the Enthronement:

People waiting outside the villa Barakat where the leader of Ismail Moslems, Aga Khan lies dead. Lake, pan to general view of the villa. Pan along villa to show the window where the Aga Khan lies. Ali Khan greeting his brother Sadruddin, youngest son of the late Aga Khan. Pan as a man carries a wreath into the villa. Villa. Aga Khan’s grandson Prince Karim, son of Aly Khan, being photographed in a group. Photographers round the group. Prince Karim, new Aga Khan IV, and group of people posing. People waiting outside gates. Pan up to the villa.

The mosaic portrait of  the current Ismaili Imam, Aga Khan IV, shown on this page is made from lapis-lazuli (or lapis), a semi precious stone which has been mined in the Badakhshan province in Central Asia and Afghanistan for thousands of years. The finest lapis has an intense blue colour, and is found in the Kokcha river valley of Badakhshan. Here is a comment made by Crimson East on his blog about how Gulgee carved his mosaics using lapis:

“…I’ve said before that I know little of visual art. But I found his work on lapis lazuli portraits to be nothing short of phenomenal. Take, for instance, this portrait of the Aga Khan (spiritual leader of the Ismaili Muslims – the sect to which Gulgee belonged).

He made many portraits of this kind. The medium used in these mosaics is blue lapis lazuli stones. Basically, Gulgee had to pick through thousands of pieces of blue stone, in varying colors and shapes and sizes. Then he had to arrange them in such a way that they formed a perfect portrait of a living person. He described it as being similar to a giant jigsaw puzzle. I cannot imagine a more fascinating artistic medium…” 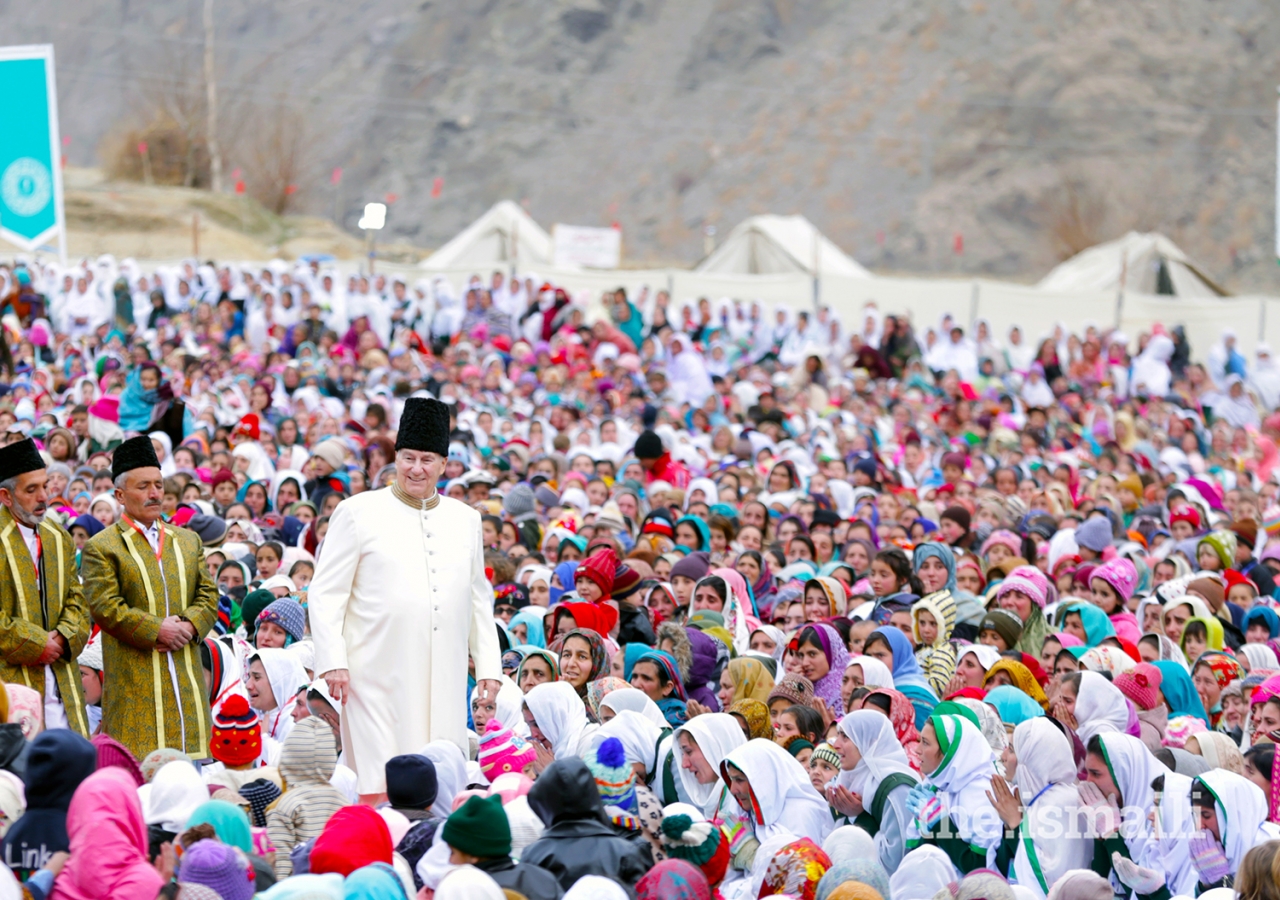 In light of Jamatkhana closures due to Covid-19, let us pray for Mushkil Asan during week of Satada which would have been observed in Canada from April 3

Pir Hasan Kabirdin’s humble entreaty to Ali, or the Imam of the Time: Beautiful recitation and translation of Ginan Sahebe Farman Lakhi Mokalea

His Highness the Aga Khan, 49th Ismaili Imam, sends blessings to his worldwide followers, and tells them he is thinking of them “every minute of the day, each day”

Support the work of the Aga Khan University at this critical time of the COVID-19 pandemic: Your HELP IS CRUCIAL and IS NEEDED