All Images shown below are  from the Private Collection of Mr. Bruno Freschi, 1985. Photos by Mr. Gary Otte. 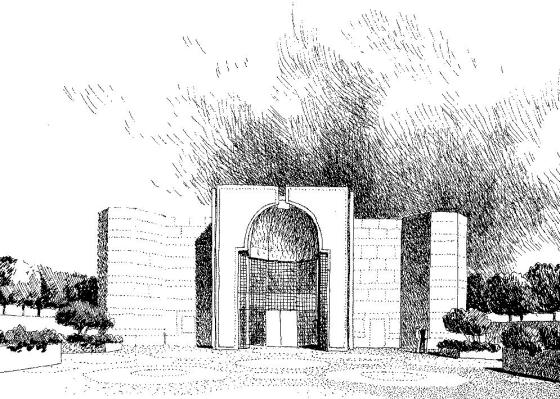 A Sketch of the Burnaby Darkhana Jamatkhana. Foundation Ceremony: July 26, 1982; Opening Date: August 23, 1985; Floor Areas: Site 14172 square metres, area covered by building 3870 square metres, parking 134 spaces. The Aga Khan noted at the Foundation ceremony: "I succeeded my Grandfather to the office of Imam in 1957, and just two weeks ago on the 11th of July, I entered the twenty-fifth year of my Imamat. During the Jubilee year many new projects will be launched which will impact the material quality of the life of Ismailis and indeed of many others, in the fields of health, education, housing and rural development, particularly in the Third World...But this is the first project to be launched during this Jubilee year and it is very important that it is a place of worship." 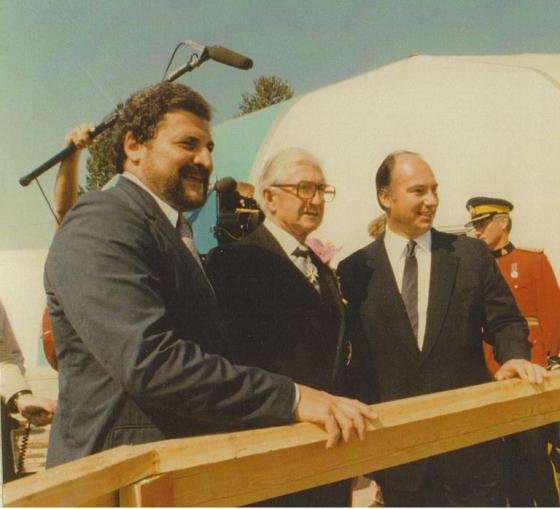 Bruno Freschi (left) with Honourable Henry Bell-Irving and His Highness the Aga Khan. The Aga Khan in his speech said: "The new building will stand in strongly landscaped surroundings. It will face a courtyard with fountains and a garden. Its scale, its proportions and the use of water will serve to create a serene and contemplative environment. This will be a place of congregation, of order, of peace, of prayer, of hope, of humility, and of brotherhood. From it should come forth those thoughts, those sentiments, those attitudes which bind men together and which unite." 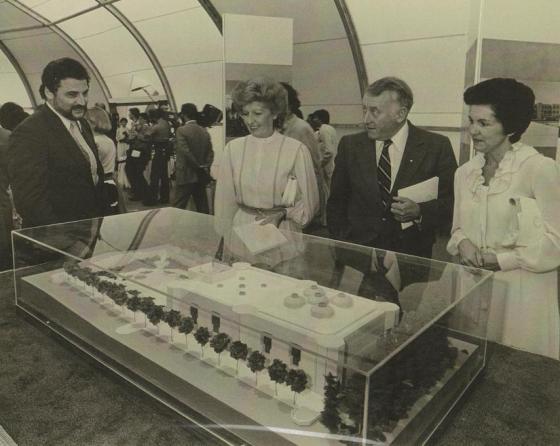 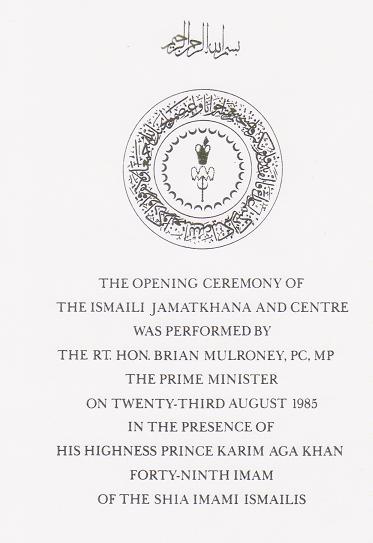 The Ismaili Jamatkhana and Centre was opened by Prime Minister Brian Mulroney in the presence of His Highness the Aga Khan, on August 23, 1985. Bruno Freschi writes: "I believe the ultimate purpose of the Jamatkhana is giving iconic foundation to the Ismaili community in Canada. Both His Highness's and the Prime Minister's comments in their speeches reflected this very Canadian idea." 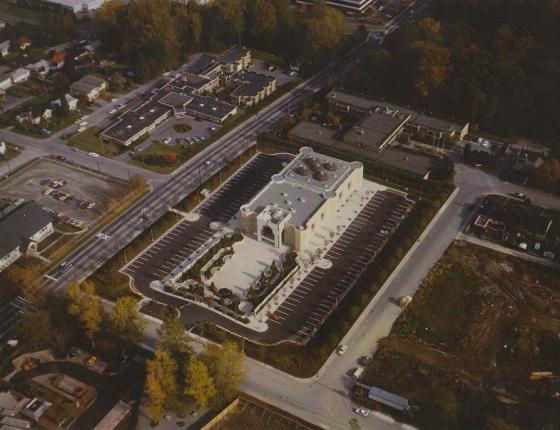 Ismaili Jamatkhana and Centre, Burnaby, Bird's View, 1985. The surrounding area is now significantly different with new residential and commercial development. The picture provides a view of the five copper domes on the roof of the building. 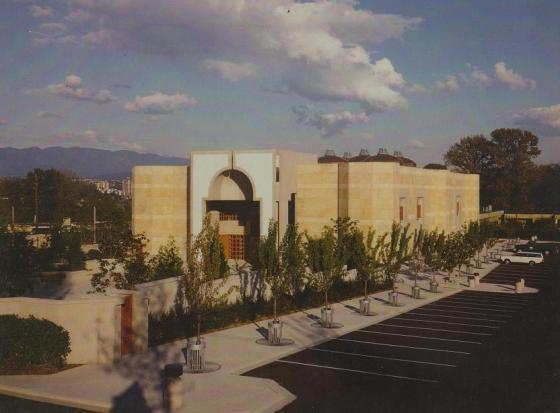 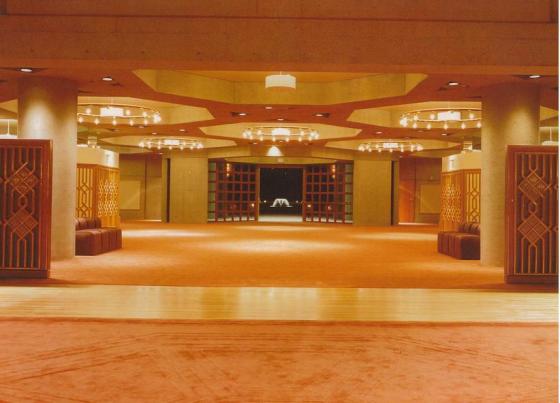 The Ismaili Jamatkhana and Centre, Burnaby. Interior decorated in various different materials. Canada's newspaper, The Globe and Mail, in a story 'Spiritual Isles in an Urban Sea', published on August 16, 2007 wrote: "Following on the Ismaili Centre near the Victoria and Albert Museum in London, England, Burnaby is home to the second of the major Jamatkhanas to be built in Western countries under the direction of the Aga Khan, spiritual leader of the world's Ismaili community. Now known as the Darkhana Jamatkhana, it was designed by Telus Science Centre architect Bruno Freschi and completed in 1984. The Burnaby prayer hall is one of the most splendid contemporary interiors in British Columbia, with a powerfully expressed cast-concrete structure and richly ornamented window surrounds." 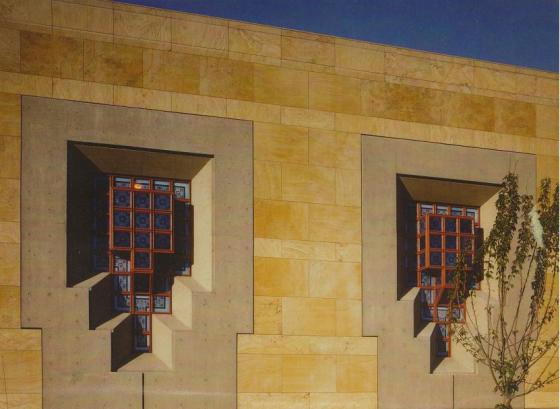 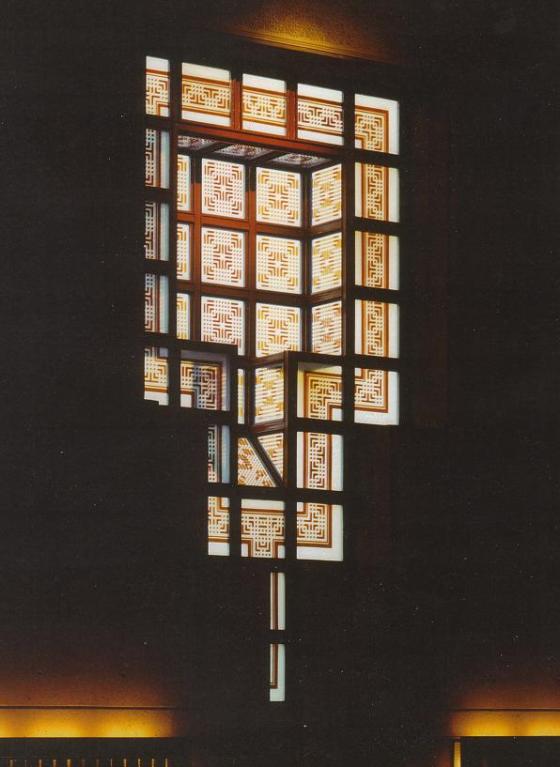 Ismaili Jamatkhana and Centre, Burnaby. A side elevation window, in opalescent cast glass showing decorative patterns lit from within.

Says Bruno Freschi: "The Jamatkhana is a very special and uniquely spiritual building. Spiritual architecture is a unique design challenge because the architecture must be simultaneously an iconic, symbolic form, complete and unequivocal yet it must transform and become ephemeral...Calligraphy is incorporated throughout the building. The spiritual voice is reflected in the graphic designs on tile work, the glass windows, carpets and wood screens. Whilst abstract the calligraphy is both traditional and spiritually evocative." 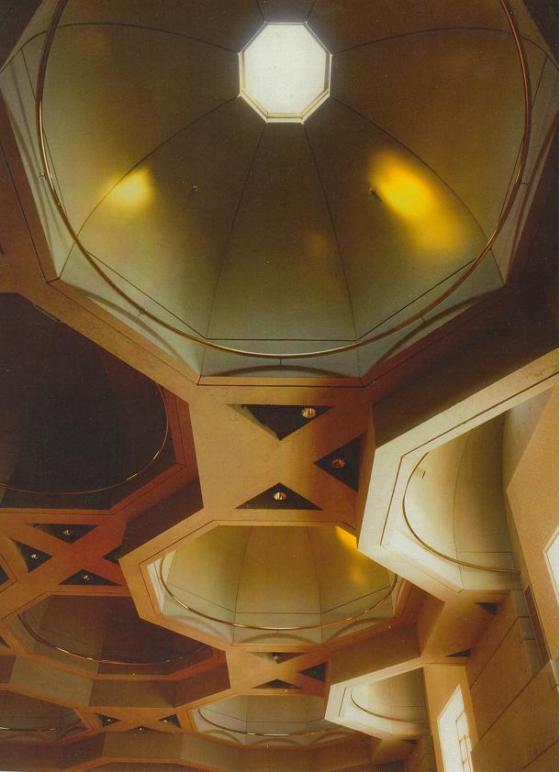 Says Bruno Freschi: "Geometry governs the entire site, the building. It is symbolized in the octagon, the 'mythical squaring of the circle'. The Octagon is omni-directional. All axial relationships are equal providing an open and non-hierarchical circulation: The centre is everywhere, and everyone is in the centre." 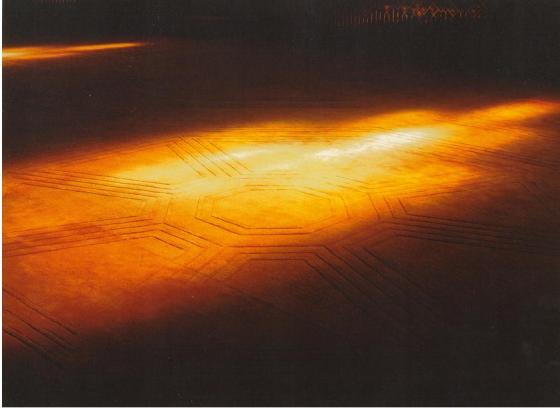 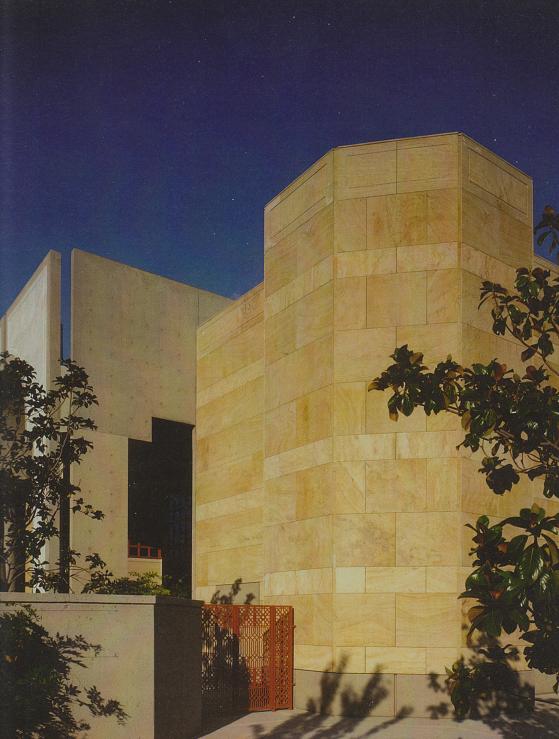 Says Bruno Freschi: "Materiality, the exposure of earth materials, concrete, sandstone, and marble gives a material presence and permanence, symbols of a 'timeless' foundation for the Ismaili community." 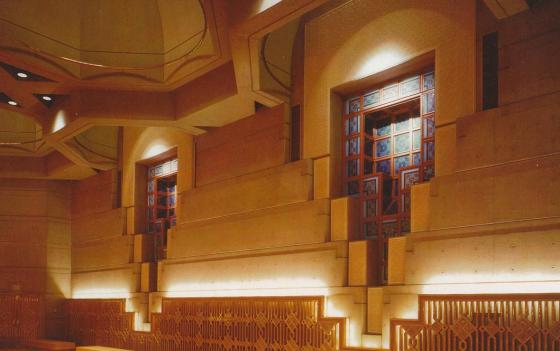 Says Bruno Freschi: "An example of 'going out' That ephemeral quality of spiritual space can be best seen in the calligraphy on the glazing of the windows. The glass is one inch thick providing acoustic insulation. The graphics are fired on both surfaces of the glass. Seen at an angle, the calligraphic images are dual and ambigious, they visually vibrate to the comtemplative viewer. This is 'signalectic' architecture, the threshold of the ephemeral sanctuary of spiritual space."

Says Bruno Freschi: "The Jamatkhana incorporates a powerful relentless set of elements. Architecture is the unity of these elements and principles expressed in the building structural narrative, a pattern of octagonal and domed structures giving the sense of unity and universality." 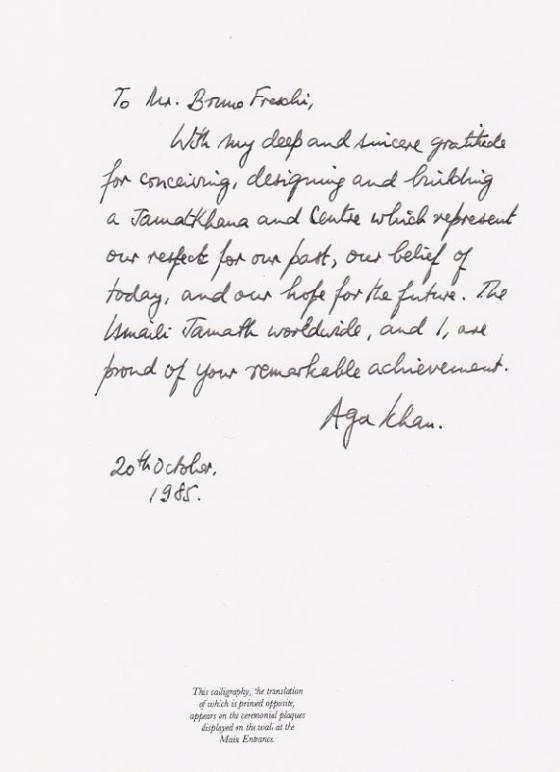 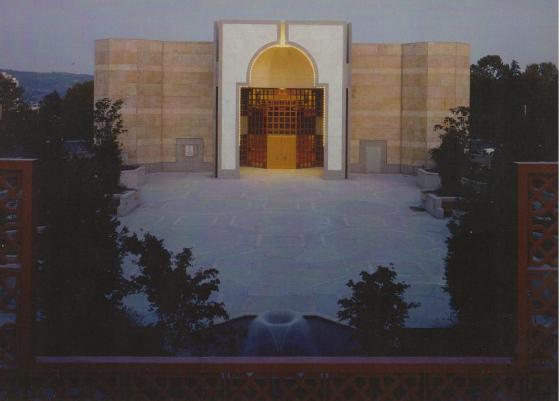 His Highness the Aga Khan, on July 26, 1982, at the Foundation Ceremony: "In Islam man is answerable to God for whatever he has created and this is reflected in its architectural heritage. Many of the greatest architectural achievements in Islam were designed to reflect the promises of the life hereafter, to represent in this world what we are told of next. Since all that we see and do resonates on the faith the aesthetics of the environment we build and the quality of the social interactions that take place within these environments reverberate on our spiritual life. It is with this in mind that the Burnaby Jamat Khana has been conceived.

Note: The thumbnail gallery provides links to some additional pictures not shown above. The captions are available also in that gallery, so please do visit it:
♦ Voices: Thumbnail Photo Gallery of the Ismaili Jamatkhana and Centre, Burnaby, British Columbia, Canada
Photo captions compiled by Simerg from various sources as indicated, including Mr. Freschi’s interview.

26 thoughts on “Photo Gallery of the Ismaili Jamatkhana and Centre, Burnaby, Canada” 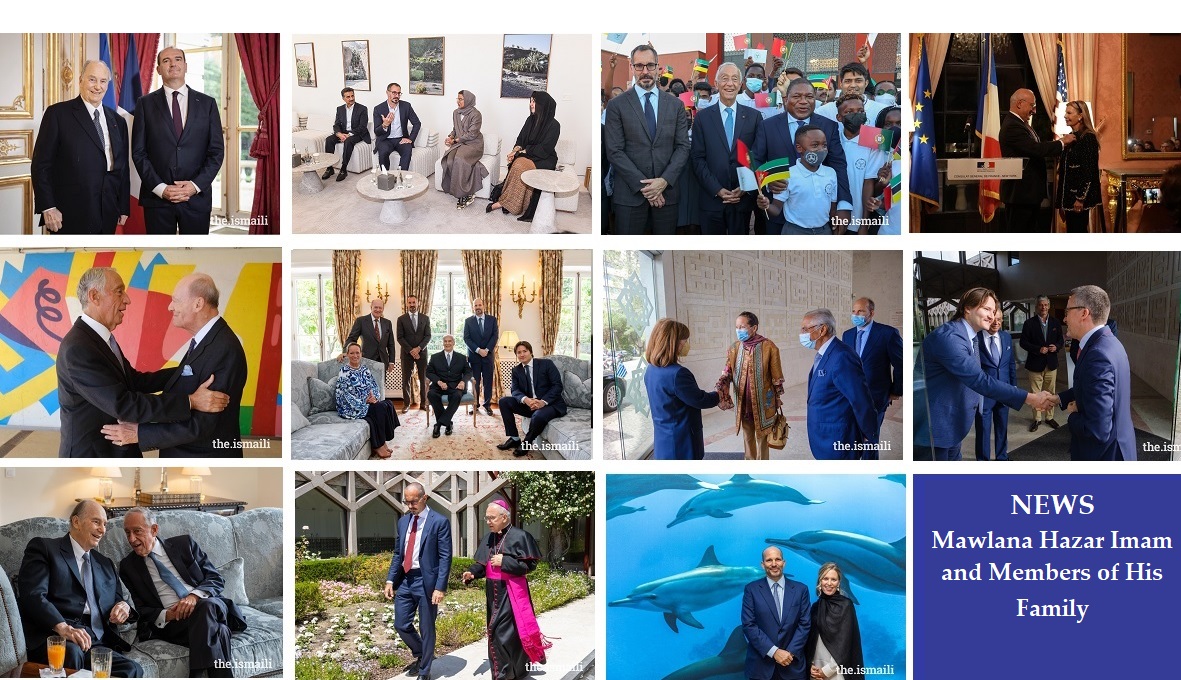