Portraits of the three Shaheeds, Karmali Dahya, Lalji Ladha and Missionary Khudabaksh Talib (right), who all died when their lorry slid into a ditch near Kilosa in 1925. The photo was displayed in the lobbies of jamatkhanas around East Africa at the instruction of the 48th Ismaili Imam, Mawlana Sultan Mahomed Shah, His Highness the Aga Khan (1877-1957). Photo: Anverali Talib Family Collection, Montreal, PQ, Canada.

This account of a Jamati tragedy that occurred almost ninety years ago, in 1925,  is based on an authentic Gujarati narrative that was prepared by an officer  of the Aga Khan Council in Dar-es-Salaam, just four days after the accident that took the lives of three Ismailis, namely Khudabaksh Talib, Karmali Dahya and Lalji Ladha, who were bestowed with the title of Shaheeds (one who has died in the cause of faith).  The PDF document below is part of the history of the Ismailis of Tanganyika (now Tanzania) where Ismailis such as my grandfather settled in the 19th century. It is hoped that many other individuals who possess rare and insightful documents, sad as their contents might be, will share their historical treasures through website’s such as this, to bring us an awareness of critical events in our history that would otherwise be “lost.” These anecdotes should not be ignored, as they reveal pertinent information about specific incidents and events. The officer and the Aga Khan Council are to be commended to have prepared the Gujarati report in a timely manner. The document is clear and well-written and I recommend that it be printed and distributed or read out to family members.

The story is from the time of my grandfather, Meghji Visram. Born in  Sinugra, Kutch, India, on July 7, 1885, he migrated to  Tanganyika in 1899 at the advice of Mawlana Sultan Mahomed Shah Aga Khan, and settled in Kilosa, located approximately 300 kilometres west of Dar-es-Salaam. As we know from our family history, he had provided the 2-ton lorry (truck) that was involved in this accident, and claimed the lives of three outstanding Ismailis on a very fateful day.

One of the victims was a young and dynamic missionary, Khudabaksh Talib, the great-grandfather of Malik Talib, the current President of His Highness the Aga Khan Council for Canada. As part of Imam Sultan Mahomed Shah’s ambition to establish a boarding school in the interior of Tanganyika, the Recreation Club of Mumbai, which came to be known as the Ismailia Association (and now ITREB), decided to send Missionary Khudabaksh Talib on a mission to give waezes (sermons) on religious matters as well as to impress upon the jamat about the Imam’s vision for a boarding school, and to get a feedback on its possible locations.

Missionary Khudabaksh Talib’s waez tour took him to a number of towns on the coastal and interior towns of Tanganyika. After completing his duties in Bagamoyo and Dar-es-Salaam,  the missionary accompanied by Amaldari Karmali Dahya departed for Morogoro, approximately 190 kilometres west of Dar-es-Salaam, and Kilosa, a further 120 kilometres west, and their surrounding jamats on November 21, 1925.  After completing Kilosa, they left for Iringa, approximately 250 kilometres South-West of Kilosa, on December 10th, at around noon. Among those who accompanied the missionary in the 2-ton truck driven by Salmin Suleman were Lalji Ladha, a cousin of my grandfather from Iringa, who had specially gone to Kilosa to receive the missionary, Bhimji Hamir and my grandfather Meghji Visram. At that time there were few cars if any in the area, and lorries were the primary means of transportation. 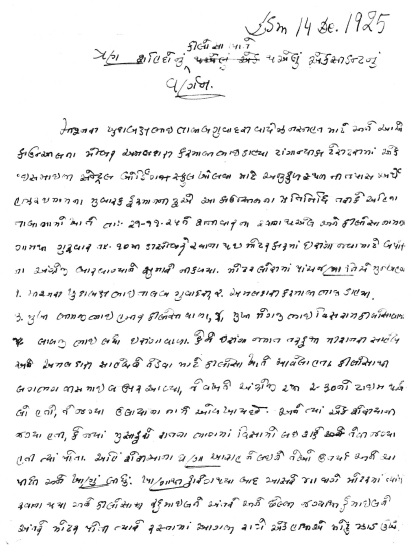 The truck’s first stop was at a village called Ulaya, some 32 kilometres away. Residing in this town was Nasir Suleman, the driver’s father, who some 25 years earlier had joined my grandfather from Muscat on his dhow voyage from India. After partaking in a meal in Ulaya, the party resumed its journey to Iringa at about 4:30 p.m.  After barely 9 kilometres they came across a fallen tree, which was blocking the road. Salmin decided to veer the lorry around the tree, not realizing that the land around the tree was very wet and unstable. The land gave in to the 2-ton truck, which then slid into the muddy ditch and overturned.

Missionary Khudabaksh Talib, who was seated in the middle front seat, died on the scene instantly  from severe injuries to his chest from the steering wheel and the gear lever. Whilst the truck was sliding, the missionary did his utmost to help the driver steer the lorry back, but did not succeed. My grandfather who was seated by the passenger door managed to escape from the truck, while Salmin, the driver, was thrown into the ditch and sustained non-life threatening injuries.

With the help of local villagers who had arrived at the scene, my grandfather tried to rescue the occupants who had been seating at top of a tarpaulin that covered the goods the truck was carrying. The goods were dislodged crushing everything under their weight, but they were able to rescue Bhimji Hamir, who was in a state of deep shock. Karmali Dahya was not fortunate and was covered with the fallen load, as well as lay submerged in water. Lalji Ladha was fatally injured by the wood in the lorry and was found buried in wet mud. Nothing could be done to rescue him in time, and keep him alive.

There was another truck following, and my grandfather along with Bhimji Hamir and the driver returned to Ulaya arriving there at about 7:30 p.m. Nasser Suleman, the town’s resident, immediately left for the accident scene with a big game hunter from Syria named Khalil Bavarshi. My grandfather, Meghji Visram, then returned to Kilosa at around  9:15 p.m. and announced the accident and deaths of the three individuals to the shocked jamat.

Some members of the Kilosa jamat left for the accident scene with Dr. Spear, Dr. Diwan Singh, and the Railway Station Master, Malik Mohamed Afzal Khan. The police sub-inspector, Mohamed Zaffarali, however, declined to join them. When the party arrived at Ulaya at about 3:30 a.m., they found that Nasser Suleman and Khalil Bavarshi with the help of the local villagers, had managed to free and remove the bodies of the deceased and washed them.

The doctors determined that Missionary Khudabaksh and Lalji Ladha had passed away instantly while Karmali Dahya died later. The bodies were taken to Kilosa at about 6:00 a.m. and reached there at 8:30 a.m.

The Kilosa jamat started to arrange for the bodies to be transported by a special train to Dar-es-Salaam, as per the telegram directive received from the Ismaili Council.   However, the doctors advised against moving the bodies. Thus, the three deceased members were buried at about 3:00 p.m. on Friday December 11, 1925 at the Ismaili cemetery in Mkwatani, Kilosa. Attending the funeral were the  jamat members from Kilosa, Kimamba, Mkwatani, Chanjuru and Kidete. 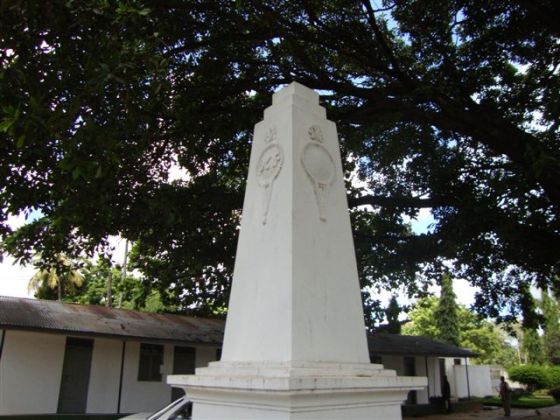 Portraits of the shaheeds on a Gujarati plaque which is mounted on the monument shown in the previous photo. Credit: Kamrudin A Rashid Collection, Toronto. Copyright.

Another plaque highlighting the contributions of the 3 Shaheeds. The text shown is an English transliteration of the Gujarati. Photo: Kamrudin A Rashid Collection, Toronto. Copyright.

The Dar-es-Salaam Aga Khan Council President, Dhalla Bhimji, accompanied by a number of council members including, Rhemtulla Gulamani, Fazal Jamal Walji, Hussein Dharamsi Hasmani as well as the volunteer co-officers, Captain Alibhai Suleman Vellani and Lt. Habib Punja, and members of Karmali Dahya family left for Kilosa by a “goods train” on Friday. It reached Kilosa on Saturday morning at about 11:00 a.m. The visiting party then joined the Kilosa area Ismaili community in a maulid for the deceased at the Kilosa jamatkhana on Saturday evening, as well as attended the ziarat which was held at noon on Sunday.

All the Ismaili businesses in Dar-es-Salaam remained closed on Saturday, and the Dar-es-Salaam Jamat held a samar (special prayers for the departed soul) at 4:30 p.m. An official report was sent to Mawlana Sultan Mahomed Shah, who bestowed the title of shaheed on the deceased. The Imam also asked that the photos of the deceased be placed in the lobbies of the jamatkhanas.

At the request of my grandfather, Meghji Visram, a site was reserved for his burial next to the three shaheeds. He was accordingly buried there after his demise on October 1, 1944.

In the following year, in August 1945, Mawlana Sultan Mahomed Shah visited Dar-es-Salaam. During our family’s mehmani (a devotional symbolic offering to the Imam) — as it was a tradition then that the Imam would move from one family to another to accept the mehmani and convey his blessings to the respective families — the Imam inquired, “Whose mehmani is this?” In reply, my father humbly said, “Khudavind, marhum (deceased) Meghji Visram family.” The Imam responded by banging his walking stick on the ground and said, “Oosko marhum nahi bolo, woh moman tha, moman kabhi nahi marta, woh meri Huzur mein hai” meaning “Do not call him mahrum, he was a momin (faithful), and a momin never dies (in the heart of the Imam), he is in my presence”.

Shaheed Khudabaksh Talib as mentioned previously is the great-grandfather of Malik Talib,  the current President of His Highness the Aga Khan Council for Canada, and also maternal grandfather of  Naaz Juma, the  Kamadiani of Orlando Jamat.

May the souls of the deceased rest in eternal peace and in the abode of the Nur of Imamat.

About the author: Sadruddin Rajabali Meghji, pictured with his wife Yasmin, migrated to Canada in 1973, and currently lives in Toronto. He comes from a family that has a history of service to the Ismaili community. Sadru’s  most recent article Rediscovering a Lost Piece of Ismaili History — First Steps in the Migration of Tanzanian Ismailis to Canada was highly praised for drawing attention to the subject of migration from Tanzania which has not received adequate attention from immigration historians or the community at large. Meghji’s piece and complete profile may be read by clicking on the above link.

20 thoughts on “A True Account of How Three Ismaili “Shaheeds” Lost Their Lives in a Tragic Accident in 1925 Near Kilosa, Tanganyika”