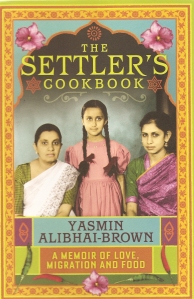 Author to visit Toronto and Vancouver in September, 2009 for Readings

Yasmin Alibhai-Brown, who was interviewed recently by Simerg (Voices: 30 Questions for Columnist Yasmin Alibhai-Brown), will be visiting Canada in September, 2009, to promote and sign her book The Settler’s Cookbook: A Memoir of Love, Migration and Food in two major Canadian cities, Toronto and Vancouver.

The book has received particular acclaim in the United Kingdom where Ms. Alibhai-Brown is widely known for her columns in one of Britain’s quality daily newspapers, The Independent. The following are excerpts from some of the reviews published in English newspapers:

‘The journalist writes about her past, the Ugandan Indian Diaspora; her arrival in Great Britain in 1972; her years at Oxford, relationships, family and career. Both Elizabeth David and, more recently, Claudia Roden have made the links between food, history and geography, but this is a wonderful book that takes the connections further. There has been little written about the ‘wahindi’, the Indian settler’s in Africa and Alibhai-Brown gives us a history of those empire builders who were expelled after Independence.”
Royce Mahawatte, Times Literary Supplement

“This wonderful book …is a path breaking record, but also a compelling, moving narrative: of shifting identities, survival and …maternal love.”
Susan Williams, The Independent

“Alibhai-Brown’s response to an upbringing in a secretive community is a determination to tell all…a courageous degree of honesty for anyone, let alone a Ugandan Asian woman…a brave little book.”
Jeevan Vasagar, The Guardian

‘This is an unexpected joy of a book. Woven around the people, places and dishes that have shaped Yasmin Alibhai-Brown’s life, it follows an emotional and culinary journey from childhood in pre-independence Uganda to London in the 21st Century. It is a voyage filled with edible mementos…evocative, revealing and often tender ..it is s story seldom told.”
Lucas Hollweg, The Sunday Times

Ms. Alibhai-Brown will do a cooking demo at the Hot and Spicy Festival in Toronto's Harbourfront on Friday, September 4th, 2009

Ms. Alibhai-Brown’s  presentations in Canada will be as follows: