I’m afraid I have some awful, awful news to share. Our dearest, most beloved Mo passed away today on New Year’s Day, Tuesday, January 1, 2013, at approximately 2.30 a.m. in our home here in Chiang Mai, Thailand.

We had been out celebrating the coming of the New Year with lots of friends and Mo, as always, was in great form. He had put a flowered headband and a bow around his forehead and had everyone laughing and dancing all night. We floated sky lanterns at midnight and were marvelling at how they danced their way up into the heavens in order to touch the moon and its iridescent halo that was pulsating with luminous light.

When we returned home, Mo stumbled a bit in the elevator but walked to our door without any problem. He sat down at the dining table and asked me to get him a glass of water. As I turned my back to open the refrigerator, he fell off the chair and crashed to the floor. In the half second it took to get to him, he was nearly unconscious. He couldn’t see or hear me. His heart had given out.

Not many of us could hold the amount of love and joy and exuberance that always filled Mo’s heart. He was forever determined to live life to the fullest and in the now. And that he did. While it seems so unfair that he was taken from us so suddenly six months before his 62nd birthday, I think his physical body simply could no longer contain his emotional body.

If you would like to send a message to Mo or about how Mo touched your lives, you can email me [or submit them on this page – editor] and I will collect them all to share with his family…..

Thank you for all your support. 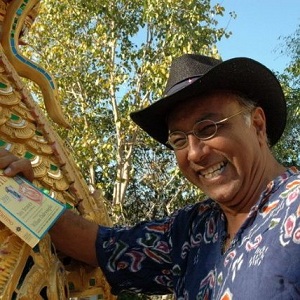 Just about a month ago, when Mohezin Tejani sent his trilogy, “The Seven Ages of Man Redux”, for Simerg he expressed the wish that it should be published by Christmas. Despite some special circumstances, and the fact that I was behind with some other articles that had already arrived before Mohezin’s piece, I got his brilliant piece out on December 19th, 2012. He was absolutely thrilled, and wrote back to say how pleased he was with the presentation. But, being in a little bit of a hurry, I had introduced a few errors into his three remarkable poems about life in Africa, Asian and America in 2012. He never expressed any displeasure at this, and asked me to correct the mistakes whenever I had the time. He was always very warm and affectionate.

He well understood life and its ups-and-downs as well as its challenges. His goals were high and noble, many of which he fulfilled by serving humanitarian causes around the world. In this, he said, he was inspired by the late Prince Sadruddin Aga Khan and contributed a very special Thank You Letter to Prince Sadruddin Aga Khan – “A Man of Multiple Visions” for Simerg’s series on Thanking Ismaili Historical Figures. Being a writer who had particpated in numerous writer’s festivals in different countries, he also had the desire to visit Canada to take part in similar festivals in cities such as Ottawa and Vancouver. He was also ambitious about getting one of his books published in Canada. I had promised him I would do everything on my part to see his wishes fulfilled.

Under the circumstances, nothing would come more of a shock to me than to be suddenly informed that my wonderful friend, a great author and humanitarian, passed away, on New Year’s Day at the age of 61. The sad news was conveyed to me by one of his cousins, and I later spoke as well as exchanged emails with members of his family, who are preparing to make the long trip to Thailand for his funeral ceremony. His closest friend, Lisa, sent me an email that is published before this piece.

Just two days before his death, I decided to publish a special post, Mo Tejani, An Ismaili Essayist of Distinction at Simerg, which was entirely dedicated to Mohezin’s writings, which I haven’t done for any other author. My purpose was simple: for Mohezin’s writings to be read and enjoyed during the holiday season. On hindsight, that he died shortly after the publication of the post was surreal enough. I had never met Mohezin, yet I felt very close to him. With his sudden passing, many of his dreams remain unfulfilled. But I have to say, he fulfilled my cherished dreams and wishes in unexpected ways. He submitted great pieces, spontaneously, without being asked. For me, publishing his writings was a great privilege and an honour. He delighted me and the readers with his outstanding mind, wit and style. He also kept his promises by submitting his essays on time, it was me who was always behind. For a simple publisher-editor like myself, Mohezin made my heart dance. That is what great humanitarians and individuals are all about – they put others interests before their own, and Mohezin did exactly that. He did not distinguish between large, small and tiny publishers. Simerg was equally important to him. He encouraged me and gave me wonderful advice, even on family matters. His goal in life was to please others and he was always generous with his actions and words, as I found out in our email exchanges.

His letters always ended with the word, shanti.

It is now the turn of the present and future readers of his essays as well as his beloved brother and friend at Simerg to say to him, “Mohezin, shanti forever.”

At the same time, we convey our condolences to his beloved family and friends as well as his colleagues around the world.

Readers are invited to click on Mo Tejani, An Ismaili Essayist of Distinction at Simerg. The post has links to all of Tejani’s articles on this website/blog. You may leave a tribute, comment or feedback for Mohezin in “Leave a Comment,” below.

Photo Essay: ‘The Queen of the Skies’ – the Beautiful Boeing 747

Flashback 2016, Photograph and Video: Tears of Joy in Kyrgyzstan as His Highness the Aga Khan Blesses Ismailis