Editor’s note: In this piece, Khurshid Makani pays a tribute to her great grandfather, Nazarali Rahim Makani or Nazarali Bapa who passed away in 1951. More recently in 2015 Khurshid’s own mother, Noorunisa Maherali, passed away in Singapore, and a tribute to her will follow shortly. We pray that the souls of the deceased members of Ms. Makani’s family may rest in eternal peace.

A portrait of Nazarali Bapa with a replica of a medal he was honoured with by Mahatma Gandhi. Photo: Khurshid Makani Collection.

Born in 1883, Nazarali Rahim Makani was  a resident of Hari Road, Amreli, in Saurashtra, West India also known as Gujrat.

Widowed at a very early age with five children, three sons and two daughters, Nazarali Bapa never re-married. He remained single and committed himself to his five children. His sister chose to remain with him to help him raise his children. His youngest child and daughter currently resides in Toronto, Canada, and is known as Gulbanu Dharriwala. She was only three years old at the time of her mother’s death.

Nazarali Bapa’s reputation preceded him. He was highly respected and was often requested to moderate quarrels  and disputes that took place on Hari Road, Amreli.

It was also said, that women of Amreli who knew of Nazarali Bapa especially on Hari Road, had very high regards for him, as he was known to treat women with great respect.  It is said that many considered him as an ‘Awliyah’.

Nazarali Rahim Makani was born to Rahim Devji Makka. He had three brothers and a sister.  It is said that the Makanis are those who came from Makka. However, this is an area that requires further research. Of his three sons, the youngest BN Makani became the District judge of Ahmadabad upon the recommendation of  Imam Sultan Mahomed Shah, His Highness the Aga Khan III, the 48th Ismaili Imam..

Nazarali Bapa was in the iron trade. He was a tool maker and had the expertise that was required in this profession. Due to this, his oldest son Gulam Husein Nazarali Makani (my grandfather) received a tender after the British left India to install hand water pumps in all the neighbouring cities of Bombay (now Mumbai).

Bapa’s involvement in the iron trade is of particular interest to me as I have studied a little bit about its properties. In a work entitled The Healing Power of Sufism, the authors as-Sayyid Nurjan Mirahmadi and Dr Hedieh Mirhamadi state that “Iron is the most important element in the body” and  go on to mention that “Time and time again, throughout human history, it was mastery of iron that allowed people to exert its will over another.  Iron therefore has long been a universal symbol of power and might.” Indeed, Chapter 57 of the Holy Qur’an is named Al-Hadid (The Iron). In verse 25 of Sura al-Hadid, Almighty Allah states, “Indeed, We sent Our Messengers with the clear signs, and We sent down with them the Book and the Balance so that men might uphold justice. And We sent down iron, wherein is great might, and many uses for men, and so that God might know who helps Him, and His Messengers, in the Unseen. Surely God is All-strong, All-mighty.” (Tr. by A.J. Arberry).

Thus in my view Islam provides the key to unlocking the spiritual secrets of iron. With this little bit of an explanation about iron, I would like to mention that Nazarali Bapa was a studious person in both the secular and religious fields.  I remember my father telling me, when I was a child, that his grandfather used to bring home a fakir on a regular basis for meals when he came home for lunch. 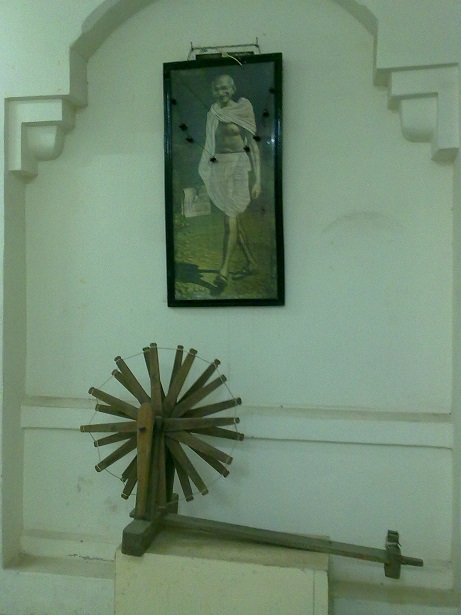 A replica of Nazarali Bapa’s spinning wheel below Mahatma Gandhi’s portrait at the Amreli Museum. The original wheel was designed to honour Gandhi’s visit to Saurashtra. Photo: Khushid Makani Collection.

Nazarali Bapa’s legend continues in the Museum of  Amreli, where the replica of his ‘retiya’-spinning wheel  which he designed for Gandhiji to honour the latter’s visit to Saurashtra for the first time after winning his freedom is on display. The wheel has been placed just below Bapu’s photo for visitors to acknowledge and marvel.

A silver replica of the Gold Medal given by Gandhiji to Nazarali Bapa and the latter’s photograph are also with the museum.Bapa was a loyal to Gandhiji and his teachings.

About the author: Khurshid Maherali Gulam Husein Makani is the youngest daughter of Nazarali Makani’s first grandson, Maherali Gulam Husein Makani. She was born and raised in Singapore, and trained in speech and drama as well as early childhood education. As an educator, she assumed the roles of a teacher and school principal, as well as taught English to foreign students.  She also operated two schools. During her teaching career she also travelled to China to teach English.

Simerg encourages readers to submit tributes or death notices for deceased members of their families. For submission details, please click Obituaries and Tributes: Simerg Invites Ismaili Readers from Around the World to Honour and Celebrate Lives of Family Members Who Have Returned to Their Original Abode

8 thoughts on “Remembering Nazarali Bapa: An Iron Craftsman Who Made a Spinning Wheel for Mahatma Gandhi”