In the early afternoon of 11 July, 1957, after an Imamat spanning seventy-two years, the 48th Imam, Sir Sultan Muhammad Shah, Aga Khan III, passed away in Geneva.

In a leading article published the following day, The Times of London offered condolences “to the millions distributed over the length and breadth of the Islamic world”, recognizing the Imam as “a great force working for understanding and harmony between east and west”; the obituary in The Times was titled: The Aga Khan: A Citizen of the World.

On July 12, 1957, the will of the 48th Imam was read at Villa Barakat in Geneva with the whole family present. In his will, the Imam stated:

“I appoint my grandson Karim, the son of my son, Aly Salomone Khan, to succeed to the title of Aga Khan and to be the Imam and Pir of all my Shia Ismailian followers.” 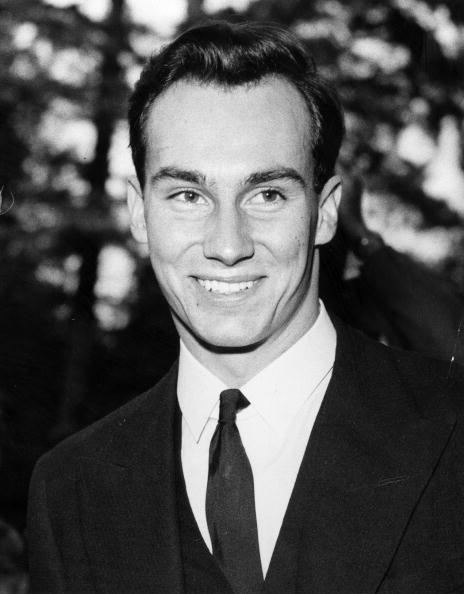 His Highness the Aga Khan IV, Shah Karim al Hussaini, becomes 49th Imam and Pir of Shia Imami Ismailis according to the will of his grandfather. He is pictured above at the Memorial ceremony held for the late Imam at the Woking Mosque outside London. Photo: Reg Speller/Fox Photos/Getty Images, copyright.

Imam Sultan Muhammad Shah had expressed a wish to be buried in Aswan in Egypt. The Imam had a special place for Egypt ever since his first visit to the country in 1935. In his Memoirs, the Imam writes:

“On my way home to India I visited Egypt for the first time. Those who have not experienced it, who have not been lucky enough to fall under Egypt’s spell, will find it difficult, I suppose, to realize the sheer magic of the first sight of Egypt. And that my first sight was on a perfect early winter day, and need I say that all my life since then I have had a special corner in my heart for Egypt, and that I have returned there as often as I could.”

The Aga Khan III mausoleum in Aswan by the Nile. In the foreground is the villa, Noor al Salaam. © Photo: Motani Collection, Ottawa

In an interview with the Al-Ahram Weekly (23-29 April, 1992), Mata Salamat, the Begum Om Habibah explained the choice of Aswan:

“…We had been coming here since 1935, when the place was not a touristic location at all but a health retreat and resort. We used to come for one or two months and stay at the Cataract Hotel and have lovely promenades on the Nile. We did not come to be cured of asthma or such things, it was just to enjoy the good weather and good air of Aswan.”

“During these visits to the hotel, one day my husband said: ‘I would like to be buried in Aswan.’”

“He used to say ‘Egypt is the flag of Islam.’ And he wanted to be buried here. Then we looked around and one day while on the Nile in a felucca with the Director, who said: ‘But why do you insist on finding somewhere to be buried? You see that house?’ It was absolutely closed and neglected. ‘It is on sale. Why don’t you buy it and enjoy yourself here?’ My husband replied: ‘But I agree. Provided I have the permission to build a mausoleum behind.’ And we bought it.”

“He put the house entirely in my hands saying: ‘You will choose the mausoleum. The style and everything else – do as you like. I want to be buried here.’”

The Begum Describes the Task of Building the Mausoleum

“Now building the mausoleum was a great task for me. I was not sure of which style. But my husband had told me to see one of his friends at the American University, a British professor specializing in Islamic architecture. He took me all over Cairo and finally I made my choice, but if you see what I chose to copy, what inspired me, you may not see a resemblance.”

“It is the al-Juyushi mosque. It is Fatimid and that is why I chose it; the piece that inspired me the most was the mihrab.”

“And something that maybe nobody knows is that this monument was made entirely by hand. Most of the marble is carved from one piece. It is the only thing, coming from abroad Carara marble, a very special and rare pure kind of Carara. The remainder, granite and sandstone from Aswan.”

July 19, 1957: The newly appointed Imam, Shah Karim al Hussaini, along with members of his family upon arrival at Aswan airport

On July 19, 1957, the Imam was laid to rest in a temporary place created in the grounds of the villa. A special service was held at a mosque in Aswan attended by Prince Aly Khan, Prince Sadruddin, Prince Amyn and the newly-appointed Imam, Shah Karim. 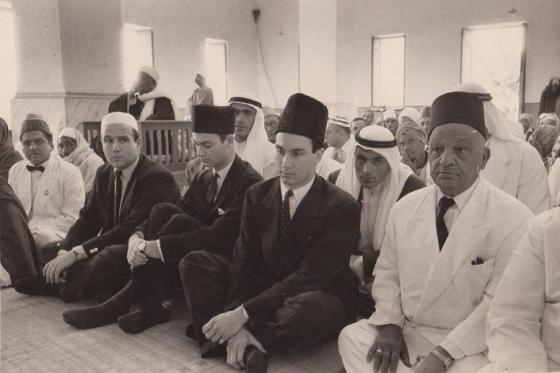 July 19, 1957: Prince Sadruddin, in a white skullcap, Prince Amyn and the newly-appointed Imam, Shah Karim, at a special service held at a mosque in Aswan. Photo: Jehangir Merchant collection

July 19, 1957: The coffin of the 48th Ismaili Imam being brought into a section of the villa, Noor al Salaam, for temporary burial.

The following month, on 21 August, a special service was held at Woking Mosque, England, at which the Lord Chamberlain, the Earl of Scarborough, represented Her Majesty the Queen’s government.

August 21, 1957: Lord Chamberlain, the Earl of Scarborough, and the new Ismaili Imam, Prince Karim, at the memorial ceremony for the late Ismaili Imam, held at the Woking mosque outside London. Photo credit: Woking Mosque

In a letter sent by her Private Secretary, Her Majesty the Queen expressed the following sentiments:

“His Highness will be remembered by all for the wise guidance and selfless leadership which he has freely given during his many happy and eventful years. His energetic and devoted work for the League of Nations in a life dedicated to the service of his followers and to the welfare of mankind will long be remembered. In the arduous responsibility which you will be called on to bear as leader of your people, Her Majesty extends to you her sincere greetings and prayers that you may long fulfil your role as counsellor to the Ismaili community who owe you their allegiance.”

On 19 February 1959, the 48th Imam was finally laid to rest in the mausoleum which had taken over 18 months to construct. A special tent was raised on the outskirts of Aswan and more than 2,500 people, including Ismailis from all parts of the world, attended the ceremony.

February 1959: The 49th Ismaili Imam in the tent city where he is seen with mourners who came to Aswan for the final funeral ceremonies of the 48th Ismaili Imam. © Photo: Motani Collection, Ottawa

February 1959: Mourners watch as the body of the late Ismaili Imam, Aga Khan III, is carried into the mausoleum. Photo: Jehangir Merchant collection 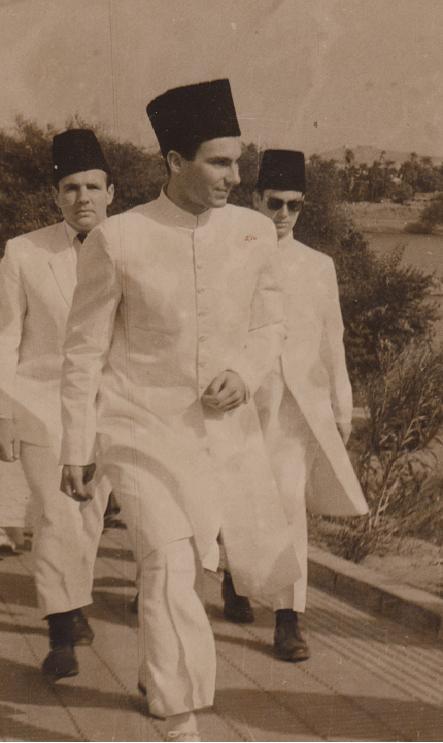 To submit comment or read feedback, scroll to bottom of page.

As part of the Aga Khan series, Simerg provided links to preview films at Britishpathe. Link 1 below (Id 34577) was not among the links included and we invite you to watch this extremely rare footage on the first burial ceremony in July 1957. Link Id 34570 was included in our list.

A note to all readers:

Please visit the What’s New page for all articles posted on this website, including the ones in the Aga Khan III series.

And do visit the Home page if you are visiting the website for the first time.

A paid subscription is required to read The Times archived articles in full. The link is: