A  Letter to Charles Darwin 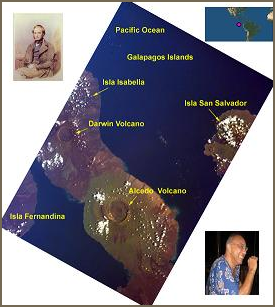 Back in geological time, five million years ago when the sea bed of the crystal blue Pacific thrust its mighty force upwards concocting new volcanoes now called the Galapagos Islands, who would have imagined that this archipelago would become the Nature center of our universe in the 21st century? You did, Charles.

On behalf of all the world’s citizens, I shower profuse gratitude on you for making that Nature cruise on the Beagle back in 1835 to this pristine paradise, some six hundred miles west of Ecuador. Thank you for defying those status-quo conservatives who continue to use God as a Machiavellian tool to justify their subjugation of the masses in the name of religion and heavenly life after death. Thank you for having the brains to unearth how Nature, the only true source of our universe, really works. The British Royal Geographical Society in those days must have thought of you as a mad heretic scientist to venture to this unexplored secret of our globe.

I would also like to extend heartfelt appreciation to you and the Ecuadorian custodians for having the foresight to turn this archipelago into a national park, where humans can only tread on specified trails with a certified guide and are prohibited from sleeping on twelve of the fourteen islands altogether. Who knows what commercial human devastation would be wreaked upon this world wonder if both of you did not have this far reaching foresight back then?

A fringe of brilliant green vegetation encircles the crater of the volcano in the center of Isla Fernandina, one of the Galapagos Islands, in this Advanced Spaceborne Thermal Emission and Reflection Radiometer (ASTER) image. In this image, streamers of hardened lava in various shades of purple spread downward from the summit across the island toward the ocean. The different colors may represent lava flows of different ages and compositions. Credit: NASA/GSFC/MITI/ERSDAC/JAROS, and U.S./Japan ASTER Science Team.

More than a hundred years later, I am fortunate enough to have just explored these magical islands to verify something that I instinctively believed since growing up in Nature-lush Africa. Let me elaborate for you what I saw there…

Avoiding the commercial expensive cruise ships for the wealthy, I boarded a trawler and embarked on a ten-day tour of the islands with seven other travelers and our ship captain, Carlos, a local seafaring navigator of Santa Cruz, who turned out to be a very hospital fellow with a passion for ecology. On our very first day, at eight o’clock in the morning, grey-white dolphins in groups of six or more appeared on either side of our boat to wish us a good morning. What is even more amazing is that for every single one of those ten days, they reappeared by our side at 8 a.m. on the dot, as if they were our own private escort into the islands, making sure that we were headed in the right direction away from danger. Or it may be that their true motivation was to ensure that we wouldn’t harm their secret lair like the pirates and whalers once did. 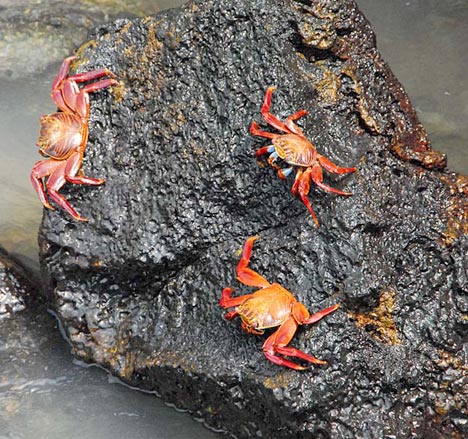 During trips from island to island, Carlos, with nothing but a pair of leather gloves and a snorkel, would dive into coves to fish out fresh lobsters or tuna for our nightly dinners. Food for survival. A gift from Nature.

At Sullivan Bay on Bartolome Island at an inlet where macho sea lions lay perched, basking on the rocks, we were doing aerobic dances with their pups swimming all around us. Carlos pulled us aside warning us not to get too close just in case the lords-of-the-manor males got a little too anxious for their pups’ safety. Every once in a while, one of the males would bellow out a loud screeching groan—just to remind us that he and the others were watching our every move. 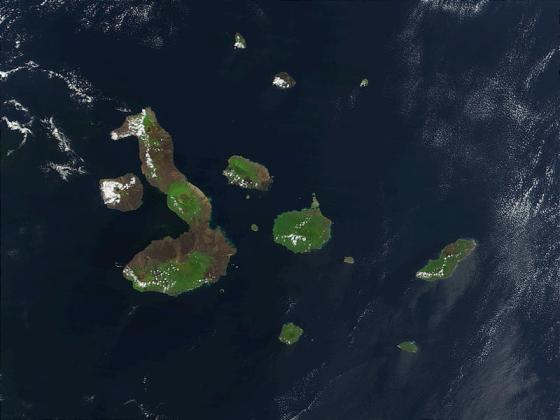 This true-color image of the Galapagos Islands was acquired on March 12, 2002, by the Moderate-resolution Imaging Spectroradiometer (MODIS), flying aboard NASA's Terra satellite. The Galapagos Islands, which are part of Ecuador, sit in the Pacific Ocean about 1000 km (620 miles) west of South America. As the three craters on the largest island (Isabela Island) suggest, the archipelago was created by volcanic eruptions, which took place millions of years ago. Photo credit: Jacques Descloitres, MODIS Land Rapid Response Team, NASA/GSFC.

The joy of peering into an iguana’s eyes, its pink tongue slithering in and out of its mouth; the sensation of stroking the back of a Darwin finch sitting for several minutes in the palm of my hand before flying off; the thrill of riding a six-hundred pound Galapagos turtle poking its snake-like head out every now and then to be sure we were on course; the pleasure of waddling with penguins by an island shore as they moved closer to the setting sun shooting its orange green arrows across the Pacific sky; the sweat of climbing an ancient lava flow up the caldera crescent to see a panoramic view of the archipelago with sea turtles and nurse sharks playing with each other in the waves below; the titillation of seeing a male and female blue-footed boobie perform their mating dance, inches from my feet on a narrow dusty trail.

I understand clearly now, Charles, why you wrote what you wrote.

Seeing the amphibian iguanas, the sea lions, and even the Galapagos penguins—all just as much at home on land as in the sea—I am able to visualize Nature’s long-term vision for the adaptation of its bountiful creatures from water to soil.

Though a few other explorers preceded you to these islands, it was your treatise of natural evolution (never just a theory) that educated the geologically illiterate on how humans evolved from chimps to gorillas to homo erectus to homo sapiens to homo locos of today. It was your words in On the Origin of Species that brought intellectual shame upon the thinkers who cajoled our world into believing the myths of racism—that black people were genetically inferior to the white-skinned ones. It was your courage that eventually exposed the malignant lie that undergirded the justification for the African slave trade. That 400-year-old lie has finally been laid to rest now that 20th century archeologists have unearthed the skulls and bones of tool-making humans in Tanzania (as well as Indonesia and China), evidence of the earliest signs of evolution from mammal to human.

Thank you my dear pioneer friend. You can sleep soundly tonight on Nature’s silk bed.

October 28, 2010. At 220 miles above Earth, the unattended Soyuz TMA-19 spacecraft, docked to the International Space Station, almost appears to be a giant telescope focusing through a break in the clouds upon several islands in the Galapagos chain. Isabela is the most easily recognizable island among this chain in the Pacific Ocean. Credit: Nasa Photo.

A hundred and fifty years later, my dear departed friend, Charles, the eternal fight of Nature versus machinery goes on undeterred. Despite Jacque Cousteau’s warnings of impending disasters in the oceans and Al Gore’s inconvenient truth of the polar ice caps melting, our planet—now teeming with seven billion people, a third of them unable to find a proper meal for the day—muddles its way through a new millennium. Humans continue warring with each other over a tiny piece of land, excavating black gold to oil their machines, and using carbon credits to rationalize the destruction of our atmosphere.

In fact, a select few (thankfully still very much a minority), calling themselves the Intelligent Design Creationists, now even have the audacity to refute your treatise with claims that the Big Bang theory and the natural selection of species is but hogwash dished out by heretic scientists. Convinced that humans, as masters of the Universe, will always rule at the top of the food chain, they wreak havoc on Earth through fear, using land mines in the soil, bombs dropped from the sky by unmanned drone planes, and chemical gases sprayed from helicopters or released from missile warheads.

Fear not Charles, they are learning their lessons the hard way. Nature, unfolding in its sweet slow geological time, proves them wrong again and again—with tsunamis in Southeast Asia and Japan, hurricanes and tornados in North America, earthquakes in China and the Himalayas, typhoons in the Philippines, El Nino in the Oceans, drought in the Sahel, famine in Somalia, floods in Europe and Bangladesh, and volcanic eruptions in Hawaii, Peru, and Indonesia.

For millennia now, Nature has always found ways to restructure that karmic balance between the Homo sapiens species and the ecological cycle of Mother Earth.

She will never let us down, will she, Charles?

About the writer: Mohezin Tejani developed a passion for books and travels during his early life in Africa. Born in Tanzania to Ismaili parents of Indian ancestry, he grew up in Uganda where he spent his childhood and early adult life. Then in 1972, along with 80,000 other fellow Asians, he was expelled during Idi Amin’s reign of terror, and first fled to England and then to America of the late sixties and early seventies. He spent the next four decades on the road as a political refugee and a humanitarian aid worker. The above piece is part of a collection of essays, poems, and letters written over four decades of travel across five continents. Tejani’s latest book Thank You Idi Amin: A Memoir of the Asian Exodus was published by Global Vision Press and has received critical acclaim. Excerpts and links to his other writings can be found on his website: www.motejani.com.

10 thoughts on “A Letter to Charles Darwin from Galapagos”