Michael Curtis and Jack Beverley hired me on a two-year contract on the spot. I was soon enjoying my work on the Nation but disturbed by its biblical slogan THE TRUTH WILL SET YOU FREE on the front page…. 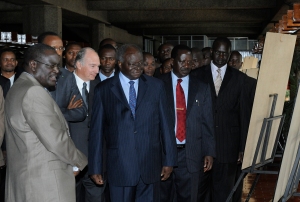 Editor’s Note: One of East Africa’s finest newspapers, the Daily Nation of Kenya, celebrated its 50th anniversary a fortnight ago. Mr. Bill Fairbairn a former reporter with the paper, now an Ottawa resident, dug into his memory and photo archives to contribute the following story and photographs for Simerg readers. We are indebted to him for this lively contribution. 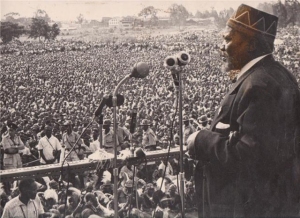 The late Kenyan President, Mzee Jomo Kenyatta, addressing hundreds of thousands of supporters at a political rally in Kenya at which Mr. Fairbairn was present. The photo appeared in the "Daily Nation" around the 20th of October, 1965. Photo from Bill Fairbairn Archives, Ottawa.

My name is Bill Fairbairn and I arrived in Nairobi looking for a newspaper job in 1964. I had worked on the Rhodesia Herald in Salisbury and the Northern News in Ndola, Zambia. Things were dangerous for a reporter working across the border from the war in Katanga. So I  left the Copperbelt to tour South Africa, and return home by ship to Scotland.

When I arrived at a Cape Town youth hostel, a fellow hosteller said he had just come down from Nairobi and that white journalists were leaving since Kenya had become independent. He said newspapers were looking for staff. I did an about turn mainly because I was not at all keen on leaving Africa.

I hitchhiked to Durban, took a passenger ship to Dar-es-Salaam and arrived by bus in Nairobi as a stringer/correspondent working for the American magazine Newsweek. The Newsweek bureau had no fulltime openings and the East African Standard’s publisher was in Britain recruiting journalists.

Seen above is an image of the Number 1 issue of The Nation, dated March 20, 1960. Price 50 cts. Initially the paper started off as a weekend Sunday paper. The daily weekday edition was introduced later in the year on October 3. Image: Mohib Ebrahim Archives, Vancouver

So with my resume I went across to the Daily Nation office and they told me to sit down at the editing desk to show them what I could do.

Michael Curtis and Jack Beverley hired me on a two-year contract on the spot. I was soon enjoying my work on the Nation but disturbed by its biblical slogan The truth will set you free on the front page. His Highness, The Aga Khan, to my delight a few months later sent a memo from his office urging the slogan’s removal from his newspaper.

Memorable for me was interviewing President Jomo Kenyatta, who had a train reconstructed for his personal needs travelling from Nairobi to Mombasa. Mr Kenyatta told me he disliked flying and enjoyed a big bed aboard the train.

Photo taken during Mzee Jomo Kenyatta's inspection of his train which took him from Nairobi to the coastal city of Mombasa. The late President (back to the photographer) watches as his daughter comes down from the train's steep steps. The photo is dated July 1965. Mr. Fairbairn who was covering this story for the "Daily Nation" is seen at the far back, second from left. Photo from Bill Fairbairn Archives, Ottawa.

I spent an afternoon at my apartment near Government House entertaining Jomo’s daughter, Mary, to games of checkers and cards. I had met her briefly when covering a rally her father held on his country estate. To my surprise she had bicycled along the road from Government House to where I lived. When I tried to phone her a week later Jomo came on the line. This was rather alarming. I immediately abandoned thoughts of courting her. She was a lovely young woman, and I was heartbroken.

Alarming, too, was my attempt to photograph Elsa, the lioness of the movie Born Free, starring Virginia McKenna and Bill Travers. The Open Roads Film Company of London had fenced off the beach at Malindi for film purposes, so I hired an African boatman to row me to the nearby island to which Elsa was supposed to swim. But I had chosen the wrong day for the event. So eventually we rowed to the beach. Who but Bill Travers and the lioness should walk toward me. My camera clicked and the lion’s ears flickered as they passed by. The film director came racing up saying I was trespassing. He ordered me on my way. I told him I was from the Nation and sought a photograph of Elsa swimming in the sea. He said that would not be possible since they wanted that photograph for billboards when the film went to the cinemas.

My photograph of Elsa on the beach appeared in the Daily Nation along with an article saying Elsa had never been more a prisoner. It prompted a letter from the film company inviting news photographers to their camp to take pictures. They did so from inside a cage with the lions outside! 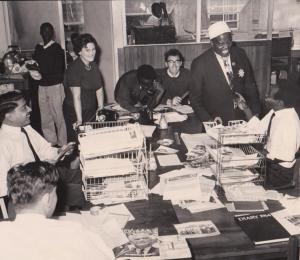 Staff of the "Daily Nation" and "Taifa Leo" in a jovial mood as the Mayor of Mombasa (white cap) visits their Nairobi office in 1964. The Mayor is seen talking to Harry Sambo of Taifa, while Joe Rodrigues of the Nation watches from across. Bill Fairbairn is seen next to the Mayor looking straight ahead. Photo: Bill Fairbairn Archives, Ottawa

Socially, I was the only white player on the Daily Nation cricket team and a keen visiting snooker player at the Aga Khan Club in Nairobi.

A standing joke that was repeated many times was when the Nation was getting ready to begin publishing. Publisher Michael Curtis was awaiting a key item of machinery for the rotary press. When a plywood box arrived he assumed that was it. He called the staff downstairs to ceremoniously open it. It contained stationary items such as pencils, pens and rulers! However the key gadget did arrive some time later.

I must say that the first two African editors of the Nation were extremely capable. Hilary Ng’weno and James Githi, I believe, were their names. They built for the future. So I say well done to the Daily Nation on its 50th birthday.

For my own part I have completed almost 60 years in newspaper work on three continents and written two books, one on Africa, which I sent to His Highness the Aga Khan.

Best wishes from a vagabond reporter. 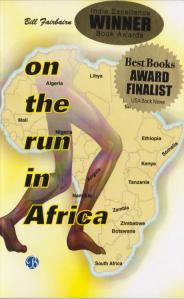 Cover of Bill Fairbairn's award winning novel "On the Run in Africa." The novel has been dedicated to atheletes who fought against racism in sports.

Mr. Bill Fairbairn is  currently a (volunteer) features editor for the community newspaper Riverviews in Ottawa, where he lives with his wife Janina. His journalism career since 1950 took in stints in Britain, Africa, France and Canada. He has worked for several newspapers including The Sheffield Telegraph, The Sun, The Scotsman and The Vancouver Province and has taught journalism in British Columbia and recently in Ottawa. He is completing his new book, The Printer’s Devil, which is due to be published next autumn.

He can be reached at befair@sympatico.ca.

Please visit our Home page for quick links to recently posted articles, and What’s New for all the articles published on this Web site. Do not miss Voices: World Renowned Photographer Sarite Sanders Portrays Mysterious Radiance of a Fatimid Tomb and the Elegance of the Aga Khan Mausoleum

5 thoughts on “Best Wishes from a Vagabond Reporter”