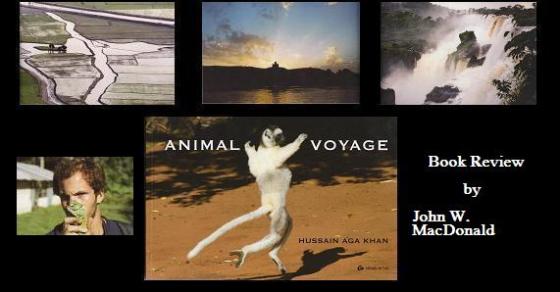 Prince Hussain Aga Khan, in his second photo book of the same name, Animal Voyage: Travels 1996 – 2007, has further refined the original photographic edit and improved the quality of the images on the printed page. Animal Voyage (editions de l’oeil, 128 pages) is a collection of travel photographs of various animals taken over a decade and from twenty-five countries. His first book of photographs dated from 1996 to 2004 can loosely be viewed as a first edition.

In any case, the updated photo book is more than a selection of typical landmark images of travels but is a printed record with his particular eleven year documentary vision. For example, from his visit to Uluru (Ayers Rock) we do not see a photo of the famous large sandstone rock formation in the southern part of the Northern Territory in Australia but instead he depicts a silhouetted Crested Pigeon mingling among chair legs on a brick terrace.

Throughout the book we are brought along to various exotic destinations with Hussain. We are his travelling companion on his many journeys and are a virtual witness to what he sees as important to record, which is the photographic evidence of many endangered species. From the inside front cover we know that the proceeds from the sale of the book will be distributed to the Prince Sadruddin Aga Fund for the Environment and the Earth Focus Foundation, Switzerland.

Throughout Animal Voyage there is not so much information presented to overload the reader, like being sapped of energy from all the travel, that you can sense the peaceful nature of humid days in Madagascar photographing tree frogs, chameleons and lemurs, or be taken on a fantastic tour of the Serengeti and be close up to all the traditional game animals you might see.

Although Hussain does his best to present the essence of the animal in their environment, he does it with a flare to present their natural habitats: birds in flight, lemurs leaping, lions lounging, and zebras grazing in the wilderness. However, a photo on page 91 particularly resonates as it is of a chained simian monkey at the bird sanctuary in Chau Doc, Vietnam. The downward-looking monkey immobilized by a chain around his neck on a tree may as well be a crucifix. It is a powerful and thought-provoking image to be sure. Then again it may be a child’s pet.

Just judging from this book you might imagine that he may not have an interest in urbanized or architectural portraits of buildings or people, but they seldom do inevitably and inexorably make their way into some of the story. The photographer or traveller, by necessity, is a foreign and hopefully benign intruder. We see included in a photo or two of his pet dog, Bolivar, and are presented with photos of wild animals living in the human environment.

The soft cover book employs a practical landscape design measuring 11.5” x 7.5” with 128 pages. New to this paginated edition, lacking in the 2004 copy, is an index to the photos which I found very helpful to identify animals and locations. Omitted from this edition, however, is a fine, bilingual (French/English) essay contributed by Antonin Potosky that further provided a philosophical examination and insight to Hussain’s photographic work. Here is an excerpt:

..Flying over continents, diving though gaps in the light, nestling against fur or scales, being swallowed up by a gigantic waterfall, reborn as a flower, a fire, a girl sleeping by an ancient pool, a pelican, a kitten with the face of a sulky little boy. For Hussain Aga Khan, each of these photographs is an appeal to the tenderness of the wilderness that guides his sensitivity, his desire to be one with nature. The animals return his gaze as if in answer to this appeal: they know, they are waiting, they are watching over his love for the world….

Animal Voyage is a wonderful book with vivid colour photographs which are edited and well sequenced not by a mere hobby travel photographer but a photographer with a sincere and noble goal of preserving nature around the world. Not an easy task to do.

Whatever the country that Hussain visited in his book initially looks familiar, but upon closer examination, it is a location representing not a vision of the past but of the present, and of a future worthy of salvage. Hussain, both the passionate and compassionate photographer, acts as a curator gathering portraits of animals and fauna most of which have the common source of being the image of the animal in situ. Ranging from closely cropped photos to vast landscapes, these global vignettes from his travels keep us thinking of the many delicate and harsh environments and ecosystems on the edge. They comprise a singular story of images of capturing the animal in their element while revealing a possibility of a darker future without them.

About John W. MacDonald: Originally from Montreal, John W. MacDonald has been a resident of Ottawa, Canada since 1997. His passionate interest in literature and photography has encompassed a variety of forms, including writing a bi-weekly column in The Ottawa Citizen newspaper, and pursuing freelance photography in addition to writing a popular award-winning blog about literary events in and around Ottawa. His photographs have been published in the USA and Canada in various books and magazines. He is currently working on a personal portrait project. http://johnwmacdonald.com