By Muslim and Nevin Harji
(Special to Simerg) 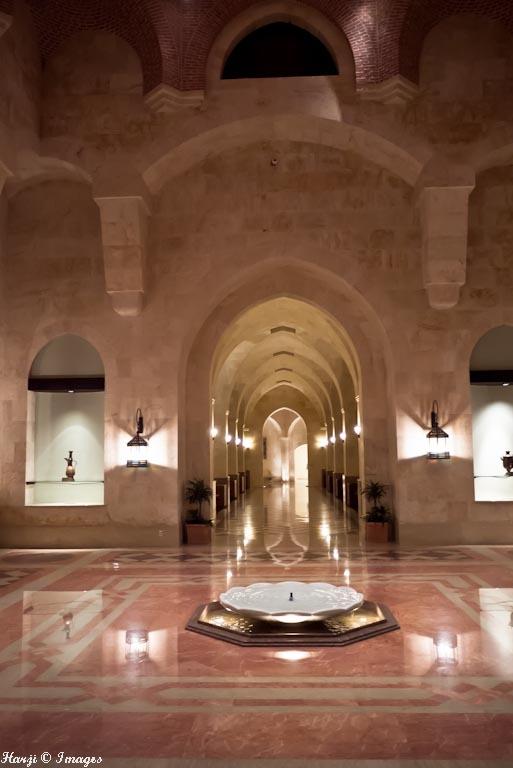 A view of the main entrance hall of the Ismaili Centre, Dubai, which draws architectural inspiration from the Fatimid mosques in Cairo. At the centre of the colourfully patterned marble floor is an ornamental fountain crafted from a solid block of Carrara marble. Photo: Muslim Harji, Montreal, PQ. Copyright.

“The congregational space incorporated within the Ismaili Centre belongs to the historic category of jamatkhana, an institutional category that also serves a number of sister Sunni and Shia communities, in their respective contexts, in many parts of the world. Here, it will be space reserved for traditions and practices specific to the Shia Ismaili Tariqah of Islam.

“…the Ismaili Centre will be a symbol of the confluence between the spiritual and the secular in Islam. Like its functions, the Centre’s architecture will reflect our perception of daily life, whose rhythm weaves the body and the soul, man and nature into a seamless unity. Guided by the ethic of whatever we do, see and hear, and the quality of our social interactions, resonate on our faith and bear on our spiritual lives, the Centre will seek to create, Insh’allah, a sense of equilibrium, stability and tranquillity….” His Highness the Aga Khan, Foundation Ceremony, Ismaili Centre, Dubai, December 13, 2003.

The Ismaili Centre in Dubai has been described by the media as United Arab Emirate’s best kept architectural secret. The prime plot of land on which it is built was generously given to the Ismaili community by Dubai’s then Crown Prince, Sheikh Mohammed bin Rashid, in 1982, to celebrate the His Highness the Aga Khans’s 25 year reign as Imam of Shia Imami Ismaili Muslims. The foundation ceremony of the Ismaili Centre took place several years later on December 13, 2003, on the occasion of His Highness the Aga Khan’s 67th birthday, when he was in his 47th year of Imamat. The Ismaili Centre was inaugurated when the 49th Ismaili Imam, direct descendant of the Prophet Muhammad (s.a.s.), visited Dubai in 2008 to celebrate his Golden Jubilee (the completion of his 50 years of Imamat). Photo: Muslim Harji, Montreal, PQ. Copyright. 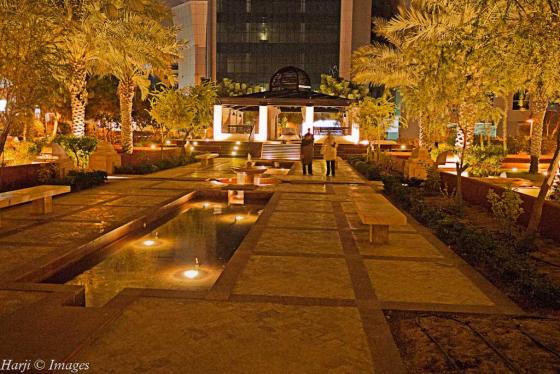 The Aga Khan Cultural Trust has also developed a park next to the Ismaili Centre as a gift from His Highness the Aga Khan to Dubai residents. The 3,000sq/m park has been conceived as a neighbourhood garden based upon the concept of Islamic gardens. The design of this small park provides something for all visitors, whether they wish to sit and read a book, allow their senses to be stimulated by the scents of flowers and the sound of water, or simply to admire nature while strolling along the gently curving walkway. Photo: Muslim Harji, Montreal, PQ. Copyright. 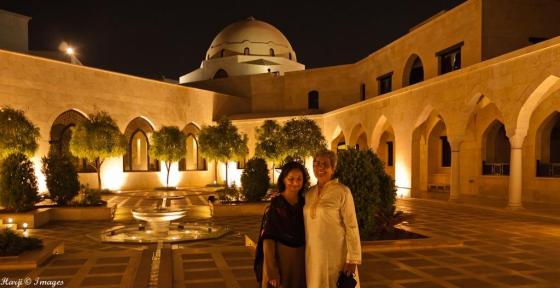 Nevin Harji, left, in a setting of calmness at the Takhtabosh Courtyard of the Ismaili Centre in Dubai. The Centre welcomes visitors. Photo: Muslim Harji, Montreal, PQ. Copyright.

Location of the Ismaili Centre in Dubai. Map: Agakhanschools.org

Philip Jodidio: Recently you finished a new Ismaelite center in Dubai. It is the opposite of the skyscraper architecture that is currently popular there. Did you want to make a statement with it?

His Highness the Aga Khan: The building boom there has purely economic grounds and does not concern religious buildings. What I build should be oriented on human standards. The debate about the highest building in the world has to do with ambition, vanity, and pride, or whatever you want to call it. These motives play no role in our value system.

(Interview published in Philip Jodidio’s book Under the Eaves of Architecture. The Aga Khan: Builder and Patron.

A view of the Social Hall of the Ismaili Centre, Dubai. The Hall can facilitate many types of gatherings. Photo: Muslim Harji, Montreal, PQ. Copyright. 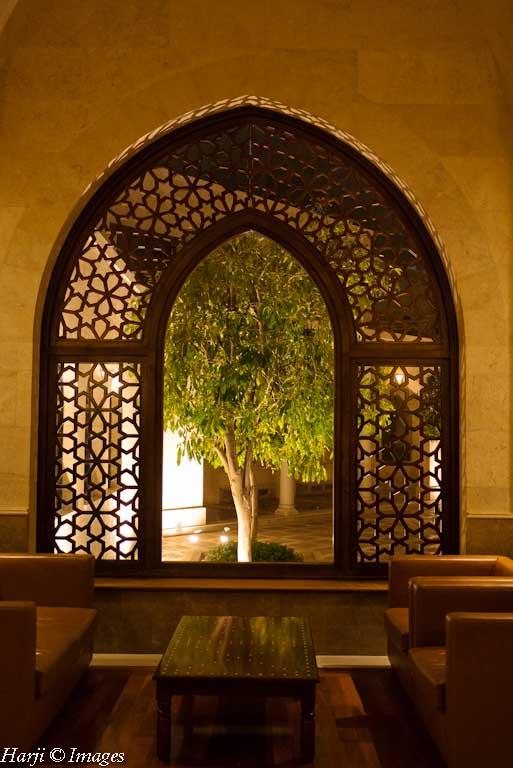 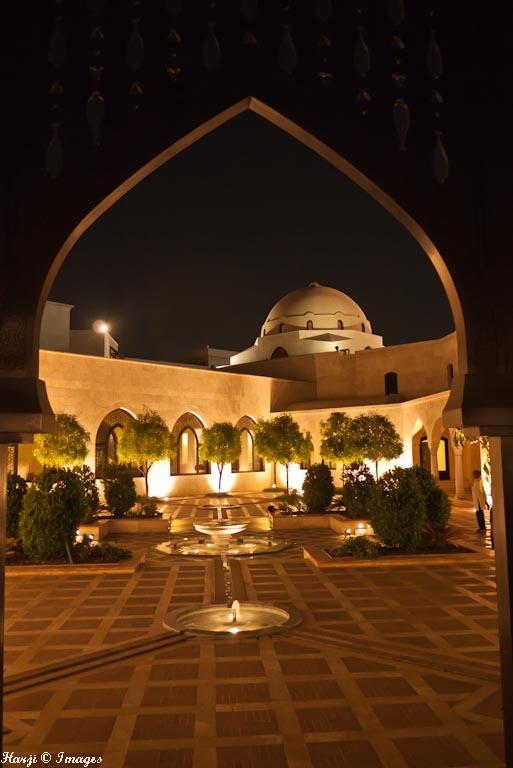 The patterns, fountains and flower beds at the Ismaili Centre, Dubai, draw upon various traditions from across the Islamic world. The building is crowned by a magnificent Ibn Tulun Mosque-like dome. Photo: Muslim Harji, Montreal, PQ. Copyright.

Philip Jodidio: If you were to name a building that had influenced you the most, which would it be?

His Highness the Aga Khan: In response to the question about which buildings have impressed me, I would say the Ahmad-Ibn-Tulun Mosque in Cairo is one example. It is unbelievably plain, yet no building is more impressive.

One of the seven domes at the Ismaili Centre, Dubai. The domes were built-in brick and wood by Kashmiri masons equipped with increasingly rare traditional construction skills. Photo: Muslim Harji, Montreal, PQ. Copyright. 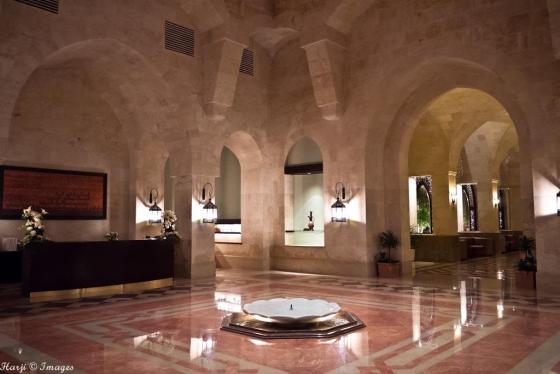 A path to enlightenment. Another magnificent view of the main entrance at the Ismaili Centre, Dubai, with the Carrara marble fountain as one of its centre pieces. Photo: Muslim Harji, Montreal, PQ. Copyright.

His Highness the Aga Khan, center, with his son Prince Rahim and daughter Princess Zahra overlooking the entrance hall of the Ismaili Centre Dubai from the balcony above on the opening day on March 26, 2008. Photo: Gary Otte, Akdn.org.

The Satagur has arrived,
The sixty-eight shrines
are here,
at home’s threshold,
The Ganges and Jamna
are here full and flowing.
Now he who bathes is purified,
While the wicked
Will stay aloof from the Lord.

Diving in the congregation-pond
Pearls invaluable came in hand.
Guard, guard the jewels:
They’ll grow manifold in worth.
Learning the truth,
Keep it in the heart,
Telling no-one else.

About the writers: Nevin and Muslim Harji live happily in Montreal, where, over the last 35 years, they have raised two children and run a successful business. Upon retirement in 2004, Muslim and Nevin truly started to explore the world. All told, together and individually, they have visited more than 40 countries around the globe, experiencing the beauty of the Middle East, the exoticism of Asia and the wonders of South America. Kayaking the Magellan Straights, exploring Palmyra by camel, hiking up to Alamut Fort in Iran or travelling by overnight train in India, Nevin and Muslim have always favoured unique ways of experiencing the countries they visit and plan to continue fostering their love for travelling the world.

Other photo essays by Muslim and Nevin Harji on this website:

Photo Essay: Iran Through a Canadian Lens
The Treasures of Iran, with Excerpts on Hafiz by His Highness the Aga Khan III
Photo Essay: The Ruins of Alamut

We welcome your contribution for THE JAMATKHANA series.

We welcome feedback/letters from our readers. Please use the LEAVE A REPLY box which appears below. Your feedback may be edited for length and brevity, and is subject to moderation. We are unable to acknowledge unpublished letters. Please visit the Simerg Home page for links to articles posted most recently. For links to articles posted on this Web site since its launch in March 2009, please click What’s New.