The logo of the Aga Khan Award for Architecture, shown above and in the photos produced on this page, was designed by Karl Schlamminger, a German Muslim of the Shia tradition.

The Name of Allah in Kufic* Script, reflecting Itself and repeating Itself, forms the basis of the logo design.

Mr. Schlamminger also designed the prayer hall of the Ismaili Centre in London about which Christopher Long wrote as follows in 1985 in the London Portrait Magazine:

…Islamic taste reveals itself in the ornate, carved and mirrored doors that lead into what must be one of the most awe-inspiring rooms to be found in any building in London.

A vast expanse of carpeted floor stretches away to tiled walls, pierced screens and stylised calligraphy. Hundreds of tiny lamps low overhead create an extraordinary and unworldly atmosphere that suspends all sensation of time and place. Ahead, due east, there is no altar, nothing to distract the eye except the constantly repeated word ‘Allah’, nothing to disrupt the cool, calm and contemplative aura of peace. It’s hard to imagine that just three feet beyond the sound-proofed walls of this enormous space there is the busiest thoroughfare of a capital city thousands of miles from the heart of Islam. 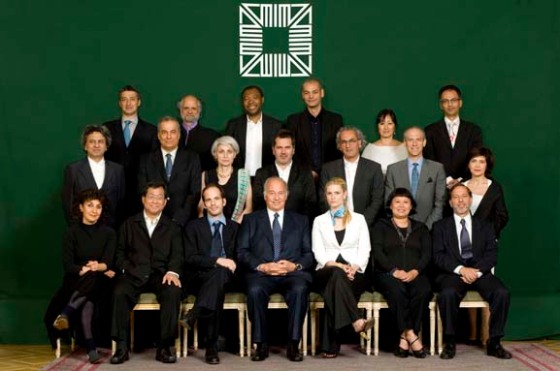 The Aga Khan Award for Architecture Logo forms a backdrop in this photo of the Master Jury of the 2007 Award Cycle pictured with His Highness the Aga Khan, Prince Hussain Aga Khan and Princess Khaliya Aga Khan

The Logo of the Aga Khan Award for Architecure on the Plaque Presented to the Library of Alexandria, Egypt.

*Kufic is the oldest calligraphic form of the various Arabic scripts and consists of a modified form of the old Nabataean script. Its name is derived from the city of Kufa, Iraq, although it was known in Mesopotamia at least 100 years before the foundation of Kufa. At the time of the emergence of Islam, this type of script was already in use in various parts of the Arabian Peninsula. It was in this script that the first copies of the Qur’an were written. The script consists of straight lines and angles, often with elongated verticals and horizontals. (Reference:Wikipedia)