The Hijra: Movement of God’s People

Editor’s Note: The following essay draws from the author’s book Memories of Muhammad: Why the Prophet Matters (HarperOne, 2009).  We are greatly indebted to Professor Omid Safi for his permission to reproduce the essay on this Web site. Copyright © Omid Safi.

The Islamic calendar does not begin with the year of Muhammad’s birth (as the Christian calendar begins with the birth of Christ), nor does it begin with the commencement of revelation to Muhammad. Rather, it begins with this purposeful move of the Prophet Muhammad from Mecca to what became known as Medina. This migration, the Muslim Exodus, established the model community under Muhammad’s rule and care. This was the emigration to Yathrib, the city that would be renamed Madina al-nabi (“the City of the Prophet”) and forever after known simply as Medina (“the City”). Like much of the Prophet’s actions, this movement has been remembered both for itself, and also for the larger symbolism of the need to spiritually and politically move to a state of emancipation. There are other similar moves in other traditions, whether it is the Exodus of the Hebrews, or the Rastafarian tradition remembering, as Bob Marley put it, the Movement of Jah People. Muhammad’s migration to Medina would be known as the Hijra, and it is the quintessential marking point of Islamic history.

The context was urgent, and timely: The pagans of Mecca were stepping up their persecution of Muhammad and his followers. Whereas in the beginning of Muhammad’s prophetic career the persecution was directed at the marginalized members of the Prophet’s community, now there were clear indications that Muhammad’s own life was in grave danger. In fact, the Meccans were planning the imminent assassination of the Prophet. It was at this time that providential grace provided an opening: a community of people from Yathrib, a city two hundred miles away from Mecca came to Muhammad, offering their allegiance to him and asking him to come to their city to help them settle their tribal disputes. They had been long impressed by Muhammad’s qualities as the Amin (“the Trustworthy”) and saw him as having the Solomonic wisdom to arbitrate among them.

After Muhammad’s dear wife, Khadija, passed away, his two closest friends were Ali and Abu Bakr, a respected elder of the community. Both would play crucial roles in this migration. Muhammad had Ali assume the dangerous task of sleeping in his stead in his bed while the band of assassins waited outside the Prophet’s house. Muhammad covered Ali in his green shawl and had him repeat a verse of Surah Ya-Sin as protection. Meanwhile, Muhammad and Abu Bakr took to the road, heading toward Yathrib. Standing outside the city, Muhammad looked back lovingly on Mecca and said: “Of all God’s earth, you are the dearest place unto me, and the dearest unto God. Had not my people driven me out from you, I would not have left you.”

The Hijra was neither an abandonment of Mecca nor the forgetting of where one had come from. It was the determination to rise up from oppression, with the intention of returning eventually to redeem even the oppressor. This Muhammad would accomplish at the end of his life through his triumphant return home. But before he could liberate Mecca, he had to move to the city where the Muslim community would become established.

Muhammad and Abu Bakr eventually arrived in Yathrib and were received with joy and beautiful poetry composed in honor of the Prophet. Ali too would join them in a few days. It had taken him three full days to disperse all the goods that Muhammad’s enemies and others had entrusted him with, a further indication of the level of trust all had had in the very soul they were persecuting.

When Muhammad arrived in Medina, his address there was simple, and a reminder of the need to connect acts of worship with care for the poor:

“O people, give unto one another greetings of Peace; feed food unto the hungry; honor the ties of kinship; pray in the hours when men sleep. Thus shall you enter Paradise in peace.”

The first communal action in Medina was establishing the Mosque, truly the first Muslim mosque. Muhammad himself joined in the building task, and he was fond of reciting a line of poetry as he worked:

“No life there is but the life of the Hereafter,
O God, have mercy on the Helpers and the Migrants.”

One of the ways in which God’s mercy rained down on the Helpers (the Ansar, those from Medina who received the Prophet) and the Migrants (the Muhajirs, those who accompanied Muhammad from Mecca) was through a bond of brotherhood. Muhammad’s first declaration was to alter the social fabric of the Yathrib (now Medina) community. He had each member of the Helpers pair up with a member of the Migrants, establishing a bond of faith that bypassed, transcended and inverted tribal connections and socioeconomic class status. Muhammad’s own faith-brother would be none other than Ali.

In one of his first speeches, Muhammad preached the following sermon:

“Praise belongs to God whom I praise and whose praise I implore. We take refuge in God from our own sins and from the evil of our acts. He whom God guides none can lead astray; and whom He leads astray none can guide. I testify that there is no God but He alone, and He is without comparison… Love what God loves. Love God with your hearts, and weary not of the word of God and its mention. Harden not your hearts from it… Love one another in the spirit of God. Verily God is angry when His covenant is broken. Peace be upon you.”

This community was one based on faith in God and love for one another “in the spirit of God,” as this speech enjoined them to do. It was in Medina that the general moral outlines of Muhammad’s teachings became linked with a full set of ethical, legal and social injunctions. In Mecca, Muhammad received the Divine call that placed him in the footsteps of Abraham, and in the line of Biblical prophets. It was that purposeful movement from Mecca to Medina that established the Muslim community, one that would remain rooted in the spirit of God, carrying the fragrance of the Prophet.

As the Prophet moved from Mecca to Medina, Muslims today, and every day, hope to leave behind and beyond the state of injustice, heedlessness and tyranny, to move to the higher spiritual ground of a community rooted in the spirit of God and the love of one another, and then to come back to redeem that very state of tyranny and injustice. That is the loftiest way to remember and honor the movement of God’s people. 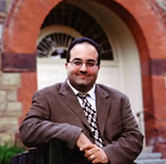 Omid Safi is Professor of Islamic Studies at the University of North Carolina, Chapel Hill, where he specializes on Islamic mysticism (Sufism), contemporary Islamic thought, and medieval Islamic history. He received his PhD from Duke University in 2000. Before coming to UNC, he was an Associate Professor of Philosophy and Religion at Colgate University in Hamilton, New York. His book The Politics of Knowledge in Premodern Islam, dealing with medieval Islamic history and politics, was published in 2006. His translation and analysis of Rumi’s biography is forthcoming from Fons Vitae, and his book Memories of Muhammad was published in Winter of 2009 by HarperOne. In June 2014, in a special lecture held at the Simon Fraser University he introduced the attendees to the path of radical love (mazhab-e eshq) that Rumi comes from, and offered insights on how to read Rumi’s masterpiece, the amazing Masnavi. His official Web site is http://omidsafi.com/ and he blogs regularly at http://omidsafi.religionnews.com.

11 thoughts on “The Quintessential Marking Point of Islamic History”