Two iconic figures in their own right – first, Nelson Mandela,  who suffered decades in prison under former South Africa’s apartheid regime; however his sacrifices and struggles eventually led to his people being freed from oppression and inequality. Bilaal Rajan met this remarkable iconic freedom fighter known for his grace, generosity as well as the noble ethic  to forget and forgive, during his recent trip to South Africa. He also met the revered Bishop, Desmond Tutu.

Then, upon his return to Canada, Bilaal headed straight North to experience the beauty of Canada’s Arctic Region. Here he encountered what everyone would dream of seeing – the iconic mighty animal of the Arctic – the Polar Bear, who is regarded as the “King of the Arctic”. These are just two of the many significant achievements in the life of remarkable Bilaal Rajan, who is only twelve.  Congratulations!

Here is a summary of Bilaal’s voyage to the Arctic taken from his newsletter. The photos shown on this page were sent by Bilaal and his assistant, Sean Cain, for exclusive publication in this website.

What an incredible experience! I just returned from an Arctic scientific expedition (www.studentsonice.com) to learn about the people, habitat and environment of our [Canada’s] Great White North. All I can say is “amazing”.

The Arctic and Antartic Polar Regions are a window into the environmental future of our planet. In these areas, scientists can study ice sheets and better understand the future of climate change on Earth.

The diverse animal life we encountered was so awe-inspiring and magnetic, we all wanted to see them at close range. On one particular Zodiac ride, we spotted a huge group of walruses just sitting on a very small piece of ice. As we slowly drifted towards them, we eventually ended just a 100 feet from  them.

I watched the “King of the Arctic”, a giant white polar bear as it consumed the remaining carcass of an unfortunate seal. I just sat there for a long time and admired the majestic presence of such an amazing animal in its natural habitat. It then dawned on me how fragile life of any kind is on our planet. Not many of us realize that the world around us is not just a place for us humans, it is OUR only home and one that also belongs to animals as well.

The most important thing to realize about the Arctic is almost too obvious: the cold.  Even in the middle of the summer, it can freeze if you don’t dress up warmly.

Besides the treks, lectures, zodiac trips…what can one do in the chilly summer weather? Go swimming, of course. Yes, you read correctly. We went swimming! I am justifiably proud to say I was the second person on the expedition to go into the frigid water but the first to get my entire body underwater. The water was so cold that when I surfaced I could hardly breathe. 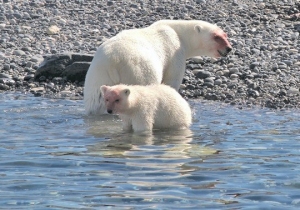 Culturally, I was most impressed with the towns and communities we visited throughout the expedition. In a village called Kimmirut – inahabited with 450 people – we were walking back to shore when we saw a local hunter with a seal he had caught, cutting and sharing the meat with his entire community. He told me that every time someone catches an animal, the entire community shares it to symbolize the importance of unity. The hunter explained it was long standing tradition that existed for as long as he could remember. That was a real-learning experience for all of us.

I learned so much on this trip – specifically about the interplay about our actions on the environment. Being able to experience raw beauty is inspiring and makes you think about how important it is to protect out planet and not to take it for granted. 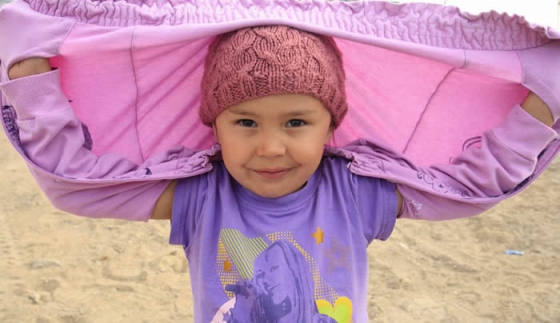 Please visit http://makingchangenow.com/ and check out the blog section to read Bilaal Rajan’s complete posts of his summer 2009 visits to the Arctic and South Africa (June 2009, archives).

2 thoughts on “Bilaal Rajan's Amazing Summer of Extremes: In Mandela's Land and Amongst the "King of the Arctic"”