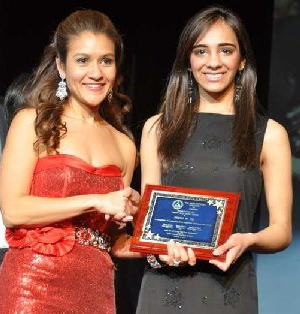 INTRODUCTION: Three Ismaili Youth with roots from Pakistan, Bangladesh and India were recipients of prestigious Awards in the State of Illinois, USA, for their academic achievements and community services. Simerg asked Mr. Sadruddin Noorani of Chicago to interview Zahra Lalani, Serena Taj and Zul Kapadia about their motivations, faith, aspirations and interest as well as to reflect on Social Networking and other topics. The interviews with Zahra and Zul were published recently (see links below). The following interview is with Serena.  She was born in Chicago, Illinois, to Nooruddin and Mehrunnissa Taj. Serena is a high school junior at James B. Conant High School in School District 211 in Illinois.

Noorani: Tell us something about the role of your parents in your upbringing and attitude to life.

Serena: My parents have in some ways defined the person whom I have become simply by their presence. Throughout my life, I have watched my parents and have seen both their strengths and their flaws. Both of my parents have some qualities that I try to emulate, and others that I strive to stay away from, and because so much of my behavior has been shaped by my responses to the actions of my parents, I have been influenced by them in more ways than I probably realize. One larger facet of my personality that I think is due to my parents is my willingness to understand and learn about viewpoints other than my own. My parents are devout Ismailis and my father is a Religious Education Teacher, but they sent me to Christian schools for five years, and our library is not only filled with copies of the Qur’an and books on Islamic studies, but books on Christianity and Buddhism as well. I like to think of myself as an open-minded person, and I think that this attitude was partly influenced by my parents’ interest in and respect for ideas that they don’t necessarily believe in.

Noorani: What are some of your major accomplishments?

Serena: Some of my biggest accomplishments relate to my passion for performing music. I played the violin for eleven years, but I have a much larger interest in singing, for which I have been trained since I was ten years old. I have been showcased in school-sponsored talent shows several times, and last year I performed solo versions of the Star Spangled Banner at the Chicago Partnership Walk and Partnership Golf events, as well as at the 2009 I-Star ceremony. This summer, I will be performing at two fundraisers for the Jesse White Tumblers. I have been a member of my school’s Women’s A Capella Choir since it was founded, and I successfully auditioned to perform a solo at the group’s first concert. Recently, I acquired the lead female role of Jasmine in my community’s production of Aladdin. My other extracurricular involvements include being a member of the French Honor Society and a Junior Varsity athlete on my school’s diving team. Academically, my honors consist of advancing through the local, regional, and state levels of the “National History Day contest,” as well as qualifying for the “National Merit Scholarship” because of my scores on the PSAT. I have been on the High Honor Roll throughout my high school career and have been the recipient of several awards for academic excellence.

One especially meaningful experience for me was being selected to participate in a civil service project in New York that was sponsored by Northwestern University. The program’s mission was to solve societal issues by creating more stable communities and improving the social justice system, and being involved in it allowed me to not only learn about problems with the criminal justice system, but to personally take steps in solving those problems as well. In February, I received the Asian American Coalition of Chicago’s “Youth Who Excel” award for my accomplishments in academia and community service.

That being said, I think that someone’s accomplishments should involve more than just their resume. A person is more than their numbers.

Noorani: Tell us something about your attitude to faith.

Serena: In order to truly understand anything, especially faith, it is essential to question what you know. I don’t think that anyone should follow the practices of a certain religion just because they were born into it; blindly following a certain path is purposeless. Carrying on with religious practices for no reason at all does no good to anyone, and for that reason, questioning is important- not for the sake of rebelling, but for learning. Questioning one’s faith allows a person to explore something bigger that him or herself, and if those questions can be answered, then the foundations of an individual’s beliefs will only become stronger. A person’s faith is deeply personal, and therefore, can be guided by other people but should not be dictated by them.

Noorani: With Facebook, Twitter, and texting, how do you manage your time, and how or where do you draw the line?

Serena: Honestly, I don’t manage my time very well. I spend a lot of time on Facebook and Tumblr, and these habits can get in the way of doing other things. That’s one of the things that I want to change about myself – while it’s perfectly okay to engage in these activities, there has to be a line. However, one thing I can say is that I don’t let texting get in the way of more important things. I think that it’s rude to text while talking to other people at the same time, and my friends actually don’t bother texting me anymore because they know that I won’t reply.

Noorani: What about socializing and friends?

Serena: I think that it’s important to engage with other people. Life isn’t all seriousness, and without getting out there and experiencing new things, a lot is missing. In today’s world, it’s far too easy to put money or work as the highest priority, and forget that people are what really matter. Besides that, different people offer different perspectives and worldviews, and being exposed to other people’s ideas is an incredibly important experience that should be taken full advantage of.

Noorani: In the wake of new realities that we find today – social networks, technical advancements – what is your advice to the Ismaili youth?

Serena: I would advise the Ismaili youth to simply adapt to these realities. As Walter Breuning said, “Embrace change, even if that change slaps you in the face.” There is no way to stop change from occurring, and living in the past or in the world of “what could have been” can only lead to unhappiness. There is nothing wrong with these changes as long as you don’t lose sight of yourself or your values. Finally, go ahead and make mistakes. It’s better to take risks and maybe mess up than to tread carefully and want more. People aren’t perfect, so what?

Noorani: What do you wish to accomplish in life and what are your career aspirations?

Serena: It’s okay with me if I don’t experience everything in life that there is to experience, but I would be dissatisfied if I didn’t do more than just scratch the surface of what was available to me. In the end, I want to know that I’ve done the best I could with the hand that I’ve been dealt. As for my career aspirations, those are still being worked out. Although part of my college experience will inevitably be devoted to whatever profession I choose, my biggest priority is to learn. I want to study philosophy or religion or any number of things that, most likely, will not make me any money. I could easily go into accounting or engineering, but frankly, those fields don’t interest me. What I do know about my career goals is that I want to do create change. As of right now, I want to work in prison reform, or possibly another area of human rights. I think that it’s absolutely disgusting that society condones behaviors that are intended to hurt people – for example, locking someone in a cage and treating them like an animal for the rest of their life simply because they have committed a crime, or not allowing a couple to marry because of someone’s ill-founded prejudice that gender is a barrier when it comes to love – and these are the types of behaviors that I want to change.

Noorani: Tell us one book and a movie that you would recommend everyone to read and watch? What about our sports teams in the NBA, NHL, the football and baseball leagues?

Serena: The last book I read was On the Jellicoe Road by Melina Marchetta, and it was amazing. Although technically for young adults, it’s a beautifully written book that I think can appeal to a wider audience. One movie that I would recommend is Tarsem Singh’s The Fall. I don’t know what my expectations were when I decided to watch this movie, but it exceeded all of them in every respect. I don’t follow many teams, but I would definitely recommend everyone to watch Olympic diving. It really is an awe-inspiring sport that doesn’t get the attention it deserves.

About the interviewer: Mr. Sadruddin Noorani is a member of the American Asian community in Chicago, Illinois, where he serves on a voluntary basis in community based organizations and government advisory councils. His services to the American Asian community have earned him recognition from the Cities of Chicago and Houston and other parts of the USA. Mr. Noorani is also an active member in the Aga Khan Foundation USA’s fund raising events. Full profile in interview with Zahra Lalani.

6 thoughts on “Young Ismaili Achievers: An Interview with Serena Taj”

Mawlana Hazar Imam, His Highness the Aga Khan, in his message on November 2, 2020, tells his spiritual children “there is no room for complacency” over the risks posed by the coronavirus “for sometime to come” and send his blessings for mushkil-asan

Mawlana Sultan Mahomed Shah, His Highness the Aga Khan: A Special Audio Presentation for his 143rd Birth Anniversary, and a Fantastic Publication for You to Download