The Seeker’s Path and Role in Quest for Higher Reality

Man has within his heart an innate desire to transcend the world of matter and seek the spiritual. This is because he perceives in the material life an impermanency. As a result he tries to seek permanency in the spiritual. This desire for spiritual understanding is strong in some; in others it is weak or even dormant. The aim of religion is to awaken and strengthen this quest for a higher Reality and Permanency. In the mystical branches of all religions, a man’s search for higher Reality (within himself) is described as an ‘Inward Odyssey’.

In Sufic language, a man who searches for such a higher Reality is called a salik (seeker, traveller on the path). He advances by stages (maqamat) along a path (tariqa) to the goal of union with Reality (fana-fil Haqq, that is, dissolution in Truth). During this inner journey or pilgrimage his consciousness expands. He begins to discover levels of consciousness beyond the normal wakeful states, until he, by the Grace of God, is raised to the highest planes of consciousness—the stages of haqiqat (Reality) and marifat (Gnosis; which is to know God by God – ‘araftu Rabbi-bi-Rabbi).

The route of this inner journey is uncharted. No two persons will share identical experiences during this journey. However, amongst the seekers a notion is perceived that it is a journey of ascent; of rising from the lower to the higher planes and that these planes correspond to levels of consciousness.

In many branches of Islam, and particularly in the esoteric teachings found amongst Sufi groups and within the Shia Ismaili Tariqa, it is firmly believed that it is possible by religious and spiritual practices to provide the ‘requisite stimulus’ to awaken and experience these potential levels of consciousness. However, there are a number of disciplines that have to be followed before a salik can experience these higher levels of consciousness. Foremost amongst the disciplines are:

A salik who steadfastly fulfils these requirements naturally develops in his heart an attraction for God; a longing for God possesses his heart. This is the maqam (stage) at which he begins to practise meditation and seek nearness to God. This represents the beginning of the ‘Inward Odyssey’.

Ismaili Ginanic Literature relates the spiritual experiences of Ismaili Pirs. The Ginans describe in considerable detail the meditative techniques used as an aid in this journey and also the path, the important milestones and inner cosmology corresponding to the different stages (maqamat). However, it is important to recognise that all these signs, milestones and the inner cosmology described by Pirs in the Ginans correspond to lower planes of consciousness, for Pirs emphatically state that the experiences of higher spiritual maqamat are not describable in rational language to people who are not initiated in the tariqa (path) and who have not experienced the maqamat themselves.

Two Ginans which I will quote to develop this theme are “Sakhi Maha Pada” by Pir Sadardin and “Bhrama Prakash” by Pir Shams Sabzwari. “Maha Pada”  is unique in that it mentions meditative practice based on breath control, as is evident from reference to Ingla (Ida), Pingla and Susamana which are the nerves or conduits of life-force associated with the spinal system and are linked with the regulation of breathing.

Friend! Ingla, Pingla and Susamana are the nerves,
and their regulating your breath (chandra – inhaling; suraj – exhaling) eliminate your lower instincts.

The reference to these nadis (nerves) and other cerebro-spinal centres in the Ginans stems from the fact that these Ginans were composed primarily by Ismaili Pirs to provide guidance to and spiritual motivation for converted Ismailis in the Indian-subcontinent. These converts were very familiar with the system by which body postures and breath control were practised in order to achieve meditative and contemplative states.

Essentially in the body there are several cerebro-spinal centres (kamals). From each of these centres emanate thousands of nadis (nerves or conduits of life-force) in different directions. The configuration of these nadis radiating from these centres give them the appearance of kamals (lotuses).

Out of the thousands of nadis in the body, Susamana, Ingla and Pingla are the most important. The Susamana is situated within the Vank Nad (spinal cord). To the left of the Susamana Nadi, on the outside of Vank Nad, is Ingla and to the right Pingla. Both Ingla and Pingla entwine the Susamana from left to right and right to left in their movement upwards, proceeding around the various kamals. The meeting of the three nadis at the caved portion of the forehead between the eyebrows (Bhamar Gufa) is known as Triveni. There is another kamal which gets specific mention in both “Maha Pada” and “Bhrama Prakash”. This is Nabhi Kamal or Naval Lotus, which as the name indicates is situated at the naval and is connected to the Bhamar Gufa by the Susamana Nadi.

During meditative and contemplative practices the cerebro-spinal centres (kamals) are aroused and activated. The arousing of these kamals correspond to the higher levels of consciousness.

The Repetition of the Great Name,  Milestones of the Ascent of the Soul and the Blossoming of Kamals

Unlike “Maha Pada”, the “Bhrama Prakash” of Pir Shams does not prescribe a particular mode or technique of meditation. It simply stresses the importance of recollection or repetition of Isme Azam (The Great Name) or the “Divine Word”.

The recollection (dhikr) , if constant and continuous moves down to the heart and, mingled with its pulse, spreads through the entire being and then absorbs the being. A detachment of senses from the body occurs.

Friend with the entire ‘being’ immersed in dhikr,
all bodily senses have disappeared.

This theme is furthered by “Bhrama Prakash”. The immediate consequence of this absorption is that the dhikr shifts by a natural tendency to the Naval Lotus (Nabhi Kamal):

Six months, the concentration abided in the heart
completly fused with the Divine Word.
One day it amazingly
shifted to Nabhi Kamal (Naval Lotus).

This verse is of considerable significance in shedding light on the course of the Inner Journey. What is evident from both “Bhrama Prakash” and “Maha Pada” is that regardless of the meditative method employed, Nabhi Kamal invariably constitutes a very important milestone in this journey. “Maha Pada” in fact identifies Nabhi Kamal as the centre at which the soul first perceives the eternal chanting of the “Divine Word”, and what appears most certain is that when the salik, rapt in deep meditation, synchronises his own dhikr with this eternal chant that the true contemplation begins.

The whole pace of the journey changes from here on. Continuing the soul stirring accounts of their experiences, both the Pirs recount how the soul, now engrossed in eternal dhikr, moves up from Nabhi Kamal to the higher kamals which bloom at its approach. The ascent of the soul through these kamals is filled with immense spiritual happiness and joy, and the state of being is as if in a spring shower of Nur (Light) and Divine Bliss. In another Ginan, Pir Shams recounts most lucidly these events of a soul’s journey through the blossoming kamals:

Five buds bloom into fifty and each by itself is a blossoming garden.
Fragrant breeze blows mildly and there is a continuous shower of Nur.
Indeed, my Lord has planted a graceful garden.

Not abiding for long in any of these kamals, the soul journeys upwards through Vank Nad (spinal cord) to the Bhamar Gufa (Triveni Kamal). As stated earlier, Susamana, situated within the Vank Nad, is the central organ in this upward journey. In “Bhrama Prakash” Pir Shams hints at this very subtly:

From westerly route (left side Vank Nad)  climbed up to the sky (Bhamar Gufa),
and there witnessed the mysterious spectacle.

Bhamar Gufa (Triveni Kamal), situated between the eyebrows, is also a very important kamal since it is here that the soul first perceives the traces of Nur (Light). So overwhelming and absorbing are the Ginanic verses regarding this particular kamal that I intend to quote both Pir Sadardin and Pir Shams to illustrate the Divine potentialities of this kamal.

In “Maha Pada” it is stated:

At Triveni there shines an eternal flame.
It shines in all its brilliance and seems like a shower of pearls.

“Bhrama Prakash” expands the vista of the Triveni Kamal much further. This kamal is the last stage where the soul-experiences can still be allegorised. Beyond Triveni, the soul’s upward flight is a journey of ‘Alone for Alone’. The experience of each individual is peculiar and personal to him alone. Bhrama Prakash says that once the soul abides in the Bhamar Gufa there is an overwhelming sense of a huge congregation blessed by the Divine Presence. The Divine Presence is yet not hypostated into a discernible ‘Entity’ but Its aura is all absorbing. The shower of Nur (Light) from this Presence is spiritual bliss. There is a sense of peace yet there is movement, motion and action all around. No instrument yet music; no sun yet light; no river yet flow.

Beyond Triveni – Dissolution in Truth

A salik (seeker) who reaches this maqam, knows the secret of timelessness. He has essentially broken the shakles of time and space. From here on the journey to his destination is independent of time and space. His speed of ascent is determined by the intensity of his desire and effort. The journey he makes depends on his longing for the object of his quest. The salik essentially creates his own time and space. Beyond him is the clime of the Beloved, the country of Love and Union, the region beyond the seventh heaven. Only a soul courageous enough to sacrifice the self can proceed beyond the Triveni. Beyond Triveni is the maqam of fana-fiI-Haqq (dissolution in Truth) as Pir Shams expresses in his “Bhrama Prakash”:

Remembrance of the Divine Name unveils the Divine;
Self is annihilated and there is the Union with Reality.

Pir Sadardin and Pir Shams are both very clear in stating that all experiences, maqamat (stages) and milestones are far inferior to what can follow with perseverance. “Maha Pada” in fact down grades all the stages by saying:

Friend! all these signs correspond to the lower.
Your home is much higher and much higher is your ascent.

And, this home, this destination, the fruit of a salik’s inner search is no less than the Love and Knowledge (ma’rifat) of God, the Most High.  “Maha Pada” is very explicit and bold on this point and its beauty is the certainty it expresses regarding the end of this journey. There is no ambiguity about the achievement by the end. If you start on your journey you most certainly reach your destination.

Friend! beyond words is my Beloved.
Undescribable, Nameless, He is worth beholding.
Friend! Sweet and Loving is the Undescribable, the Nameless. Indeed, He is so.
I, Pir Sadardin, have beheld Him with my own eyes.

Article adopted by www.Simerg.com  from “The Inward Odyssey” by Shiraz Pradhan, Ilm, Volume 8, Number 1 (July – November 1982), published by the Shia Imami Ismaili Tariqah and Religious Education Board for the United Kingdom. Copyright.

For an introduction to Ginans, please click Literary Reading: The Ginanic Literature of the Ismailis.

To listen to some Ginans, please visit the Institute of Ismaili Studies website athttp://iis.ac.uk/view_article.asp?ContentID=105313

Pir Shams’ ginans include a number which are in Punjabi. A community of followers in Punjab called Shamsis, hitherto practicing their faith in secret, came out as Ismailis only in the last century. Elsewhere a cycle of ginans called garbis, lyrics set to dance, commemorates Pir Shams’ conversion of Hindu villagers at Analvad, apparently in Gujarat, where he is said to have joined in their dance during the festival of navratri, and substituted his own words for theirs, thus weaning them of their beliefs.

Photographs of Mawlana Hazar Imam His Highness the Aga Khan, and Members of His Family from the Bernard Gotfryd Collection at the US Library of Congress 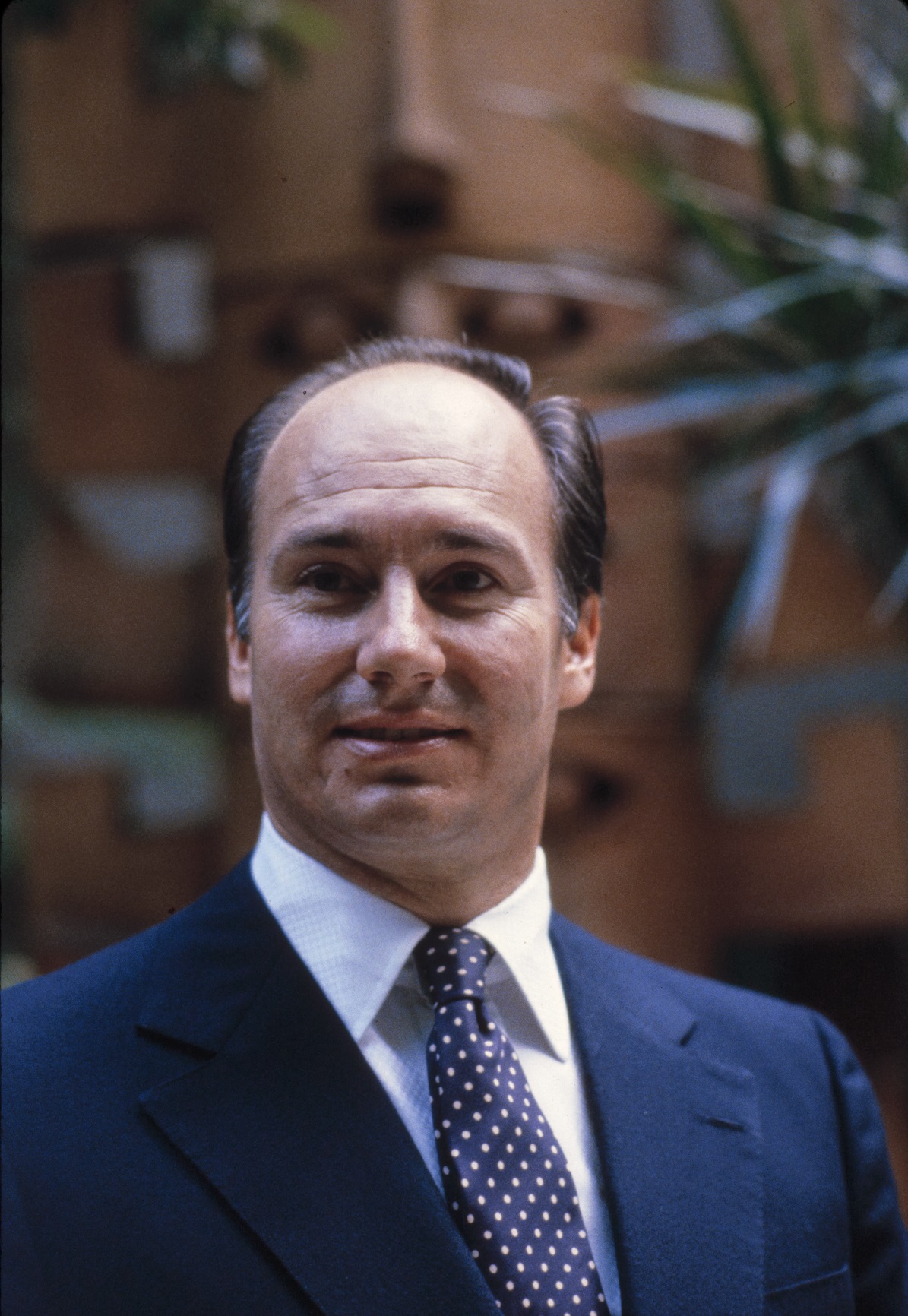