Nasir Khusraw woke from a dream that incited a gnawing curiosity within; the beginning of a long journey in the year 1045 CE. He travelled to the court of the Fatimid Imam-Caliph al-Mustansir in Cairo, Egypt where he studied for seven years. Here he was invited to the Imam’s palace, where the Imam commissioned him to spread the Fatimid teaching:

“Shāh Nāṣir,” said Imam al-Mustansir,  “you should set off towards Khurasan, Badakhshan and Balkh for the sake of calling people to the Summons of the Truth. I have appointed you as my Hujjat (Proof) in this region.” [2]

I wish I’d been in his company when he received this invitation.

The arrival of Nasir Khusraw in Badakhshan heralded a new change and implementation of novel rituals: he arranged gatherings of people (majlis) called majlis-e-dawat in the villages, later to unfold into majlis-e- Charagh Rawshan and madda-khani. These two religious rituals are prevalent and an important facet of the rituals among the Ismaili communities in Badakhshan and its neighbouring regions.

Charagh rawshan is a majlis or a daʻwat – a gathering of believers, where a lamp is lit and Qur‘anic verses recited for the eternal peace of a departed soul. The recitation of the Quranic verses is followed by madda khani till dawn – a time when the text of Charagh Nama (consisting of selected Qasidas) is recited. When the khalifa reads the text of Charagh Nama the participants chant in unison a praise to God, the Prophet Muhammad and Imams from his ahl al-bayt.

Local stories narrate that the tradition of Charagh rawshan and madda-khani arrived in the region with the missionary activity of Nasir Khusraw. According to local tradition, the first person who started to sing madda was a local ruler Malik Jahan Shah, who even renounced his throne in order to serve the Hujjat of al-Mustansir. [3] 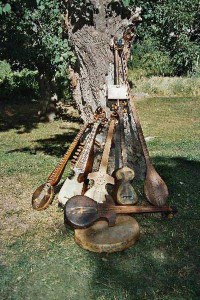 I wish I’d been present in a congregation where Nasir gave a rubab (musical instrument) to Malik Jahan Shah and asked him to recite didactic poetry – a madda. The very first ode – qasida – Malik Jahan Shah sang was a marvellous poem in praise of Imam Ali, which reads:

My tongue utters praise to ‘Ali,
My two lips unceasingly utter Ya Ali.
My head prostrates in worship to the Lord,
My thirty two teeth invoke Ya Ali. [4]

Thus, these local traditions that were preserved among the Ismailis of Badakhshan have been imparted from one generation to the next, thus linking past with the present. It is evident from the daily life of the local population that Pir Nasir Khusraw’s intellectual foresight combined with philosophical tradition still exerts a great influence among the Nizari Ismaili communities in Badakhshan and its adjacent regions. Although, the local narrative story is traditional in nature, it still brings forward certain important historical issues related to the figure of Nasir Khusraw and his missionary activities in the region as well as the tradition of Charagh rawshan and madda-khani, which were set up as part of religious assemblies.

The incontrovertible historical fact of Nasir Khusraw visiting the region remains alive in the tradition founded a thousand years ago by him. This tradition connects the destiny of the Ismailis of the region with their ‘Present and Living Imam’  Shah Karim al-Husayni – His Highness the Aga Khan.

The invocation from the Charagh rawshan:  “ ‘allahuma sali ‘ala sayyidana Muhammadin wa ‘ala ali ‘Aliyan va Muhammad salawat bar Muhammad va ‘Ali,” [5] which was, is and always will be reiterated by youngsters and elderly of these small mountainous communities in Badakhshan, is a testament to this belief and fact.

[1] Hunsberger, A. Nāsir Khusraw, The Ruby of Badakhshan: A Portrait of the Persian Poet, Traveller and Philosopher, London: I. B. Tauris, 2000, p.

[3] This story is drawn from a local narrative history called Bahr al-Akhbar, a short treatise on the life and activity of Nasir Khusraw in Badakhshan, which is ascribed to the pen of a certain Sayyid Jalal-i Badakhshi. Local tradition narrates that upon joining the da’wat of Nasir Khusraw, Malik Jahan Shah became known as Baba ‘Umari Yamgi. See: Sayyid Jalal-i Badakhshi. Bahr al-Akhar, Edited by: Rahmonqulov, R, Khorugh: Pamir, 1992

[5] This particular text of salwat used to be chanted in chorus by the people who participate in the daʻwat-i Nasir. The current text of Charagh Nama has a short form of the salwat, which is Allahumma Sali ʻala Muhammadin wa Ali Muhammad.

About the writer: Nourmamadcho Nourmamadchoev is originally from Badakhshan. In 1997, he obtained his  BA degree from Khorog State University in Arabic and Persian languages and literature. In 2001 he was enrolled into Khorog English Programme sponsored by the Institute of Ismaili Studies (IIS). After completing this programme he was selected to continue his studies at the Graduate Programme in Islamic Studies and Humanities at the IIS. In 2004, he was enrolled into one year MPhil course in Middle East and Islamic Studies, Cambridge University, which he completed in August 2005. He is now doing a Ph.D in History at the School of Oriental and African Studies, University of London.

1. Please do not miss A Fida’i Mission: Into Saladin’s Tent, which has been simultaneously published on the same day as this reading

2. Please click I Wish I’d Been There or visit the home page www.simerg.com for links to other published articles in this special series.

3. We welcome feedback/letters from our readers. Please use the LEAVE A REPLY box which appears at the bottom of this page, or email it to  simerg@aol.com. Your feedback may be edited for length and brevity, and is subject to moderation. We are unable to acknowledge unpublished letters.

12 thoughts on “Light the Candle of Wisdom in the Heart”