Editor’s note: On Sunday, March 6, 2016, Mrs. Nancy Reagan, who served at the White House as the First Lady during the term of her husband’s Presidential reign from 1981 until 1989, died of congestive heart failure at the age of 94 at her home in Los Angeles. 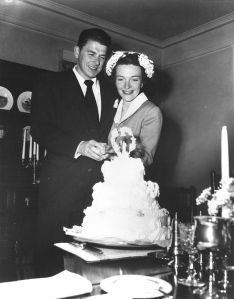 The Former First Lady, who once reminisced that “my life really began when I married my husband,” was the principal caregiver during President Reagan’s decade long twilight with Alzheimer’s disease. When the President first learned that he was diagnosed with  Alzheimer’s, he issued an open letter to the American people  on November 5, 1994 writing:

“I have recently been told that I am one of the millions of Americans who will be afflicted with Alzheimer’s disease. ….In opening our hearts, we hope this might promote greater awareness of this condition. Perhaps it will encourage a clearer understanding of the individuals and families who are affected by it….as the disease progresses, the family often bears a heavy burden. I only wish there was some way I could spare Nancy from this painful experience.”

Following this brave announcement of the diagnosis, Mrs. Reagan used her voice to represent families and increase awareness for Alzheimer’s disease. According to Newsweek magazine, the Former First Lady had also begun talking to Princess Yasmin Aga Khan about her husband’s Alzheimer’s. The princess, whose mother Rita Hayworth also had Alzheimer’s which contributed to the actress’s death at the age of 68, told Mrs. Reagan what to expect in the years to come: the mood changes, what it would be like when your loved one can no longer talk and doesn’t recognize you, how to care for someone who has grown incontinent, how to stimulate swallowing by patting the throat or touching the chin. Nancy was, “of course, devastated, but very brave,” Princess Yasmin told Newsweek.

The late President’s and Mrs. Regan’s advocacy in the fight against Alzheimer’s disease for more than 20 years had been noted much earlier by Princess Yasmin Aga Khan when President Reagan died in 2004. The Princess, daughter of Prince Aly Khan and Rita Hayworth and younger sister of the current 49th Ismaili Imam, His Highness the Aga Khan, has striven for the past 30 years to raise awareness — and much-needed funds — through Alzheimer’s galas honouring her mother. Princess Yasmin’s efforts have raised over $68 million, which combined with other donations, have helped the Alzheimer’s Association make significant progress toward their mission to eliminate Alzheimer’s disease.

The late 48th Ismaili Imam, His Highness the Aga Khan, seated on a wheelchair with members of his family with his successor, the present Imam, Prince Karim Aga Khan, standing at extreme right. Others in the photo (l to r), grandson Prince Amyn Muhammad, and the Imam’s two sons, the late Prince Sadruddin and Prince Aly Khan, who is seen holding his daughter Princes Yasmin Aga Khan Photo: Zul Khoja Collection, Ottawa.

“In 1983, I was honored to join my fellow Alzheimer’s Association board members in the Oval Office when President Ronald Reagan first proclaimed November as National Alzheimer’s Disease Month. We talked with him about Alzheimer’s disease, and heard his concern for the need to support individuals with Alzheimer’s, their families and friends, and the need to eradicate the disease. In his proclamation, President Reagan said, “The emotional, financial and social consequences of Alzheimer’s disease are so devastating that it deserves special attention. Science and clinical medicine are striving to improve our understanding of what causes Alzheimer’s disease and how to treat it successfully. Right now, research is the only hope for victims and families.”

“As a member of the Alzheimer’s Association national board of directors and, as a family member who cared for my mother, Rita Hayworth, for so many years, I mourn the passing of former President of the United States Ronald Reagan and extend my own deepest sympathies to former First Lady Nancy Reagan and the Reagan family. President and Mrs. Reagan have been leading advocates in the fight against Alzheimer’s disease for more than 20 years, and millions of Americans have been helped by their dedication, compassion and efforts to support caregivers, raise public awareness about Alzheimer’s, and substantially increase our nation’s commitment to Alzheimer research. They proved their commitment again when they joined with the Alzheimer’s Association to create the Ronald and Nancy Reagan Research Institute, to advance scientific knowledge leading to treatments.

Princess Yasmin, 2nd from right, at a recent Alzheimer’s fund raising annual gala held in the memory of her mother Rita Hayworth, who was afflicted with the disease. Photo: Alzheimer’s Association.