[The following is an adapted version of a eulogy delivered by Karim H. Karim  at the bhatti reception honouring his sister Nazil, who passed away recently in Port Moody, British Columbia, at the age of 61] 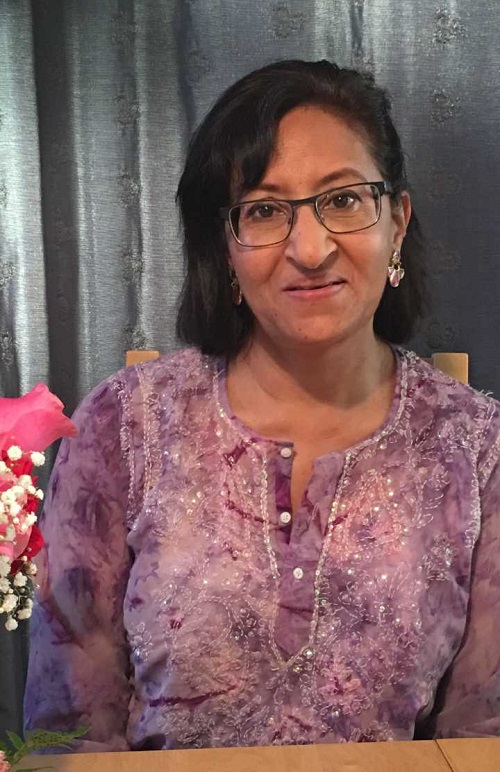 I would like to tell you about my sister Nazil Kara, whose life was ordinary and also extraordinary. Let me start by referring to women in general. They are often the anchors of their communities. Women tend to have the practical and pragmatic wisdom that keeps families stable. They are dynamic engines who seem to have unending resources of energy. Some have ordinary lives that are extraordinary. Yet many of their stories remain untold.

The name Nazil refers to someone who descends from above. Mawlana Hazar Imam’s late father Prince Aly Khan (1911-1960) gave this name to Gulbanu and Haiderali Essa Karim for their yet to be born daughter.

Nazil had a life history similar to that of many other Satpanthi Khoja Ismaili women of her generation. Her values, ethics and spirituality were shaped by the teachings of Pir Sadardin passed down through 700 years, from generation to generation, from parents to children, from grandparents to grandchildren, from aunts and uncles to nieces and nephews. The multiple cultures that she lived were those of India, Africa and North America. Nazil’s story is, in many ways, common to the women and men of the diaspora that has travelled from Gujarat to Africa and then to Canada – traversing half the planet in the course of two centuries.

Nazil was the great granddaughter of Jethibai (also known as “Bead Bai”) and Mohamed Jeevan, who were from India. Both her grandfathers were born in Gujarat and both her grandmothers were born in Kenya. Nazil’s maternal grandparents were Huzurmukhiani Sikina Mohamed Jeevan and Huzurmukhi Kanji Mohamed Jeevan; her paternal grandparents were Alijabanu Shirin Karim and Alijah Essa Karim. (Mohamedbhai travelled from India to East Africa in a dhow; Essabhai made the journey later on the steamship SS Karanja.)

Born on 20th August 1957 in Kisii, Kenya, she was Nazil Haiderali Essa Karim Kassam Premji Punja Vallani. She was a daughter, a granddaughter, a great granddaughter, a sister, a cousin, a niece, a wife, a mother, an aunt, a friend, a confidant, a mentor, and so much more. As a child she flourished among her many relatives in the townships and cities of East Africa – Kisii, Kisumu, Arusha, Magugu, Babati, Dar es Salaam, Nairobi, Mbarara. The family has grown and extended into new generations. It is scattered across Canada and other parts of the world. Some of its younger members who reside in far off places never met Nazil, but her memory is cherished greatly by her own generation of the clan and its elders. She is also remembered by many friends who reside in several countries.

My sibling lived an ordinary life like the most of us, making mistakes and doing good things. However, there is a certain symmetry and uniqueness about Nazil’s stay in this world. Unlike most people, she was given birth at home and she passed away at home. Her earthly beginning and end occurred on high ground: she was born in the hilly town of Kisii in the Nyanza Province of Kenya and took her last breath at Heritage Mountain in Port Moody, British Columbia. The spans of her life before and after marriage were divided into almost equal parts. In her community of some fifty cousins, she is the first to walk to the other world. Or, to put it another way, she is the awwal among this generation of her family to make the journey to the akhirah. My sister was much-loved by our father, Haiderali Essa Karim, who passed away six years ago. Both departed as autumn leaves were turning gold. Her physical resting place is close to our father’s in Burnaby’s Forest Lawn cemetery, which was her dearest wish.

Nazil’s was a life of service. Even her choices for employment were institutions devoted to the care of people. Her first full-time job was with the Aga Khan Foundation Canada, when its offices were in Vancouver. She then worked for her fellow citizens for 27 years as a Service Canada employee. But more than anything else, Nazil was absolutely devoted to her parents, her twin daughters Nayab and Naseeba, and to the love of her life, her husband Arif. Born under the sign of Leo, she was a lioness in protecting her family. Nazil dedicated her life to them. Her last words at 8:15 am on Monday 5th November 2018 were those of care for Arif, who has a long-term illness. With that, at the age of three score and one, she completed her seva (service) in this world and was called to the other.

My sister’s formal education began at the Aga Khan Nursery School in our home town. Following which, she attended the Kisii Primary School until 1966, and later, the Aga Khan Primary School in Naiirobi, Kenya’s capital city. From 1970 to 1975, Nazil was at Nairobi’s Aga Khan High School. Embarking on her post-secondary education, she travelled to Bradford College in Haverhill, Massachusetts, before the family formally migrated to North America. Later, she studied at the Oakland campus of the California College of the Arts. Her higher education was completed at Simon Fraser University in Vancouver. But above and beyond school learning, Nazil’s greatest intellectual asset was the practical and pragmatic wisdom of women.

Her school friends remember her as a captain in the Girl Guide Rangers. She was Head Girl in her last year at the Aga Khan High School. In sports, she was a member of the school netball team and competed at the national level in badminton. Nazil was also artistically gifted. She began pursuing art seriously in her late teenage years. The many portraits that she drew are striking in their simplicity.

During the last two decades, Nazil turned to a traditional medium – that of applying henna or mehndi as body art. Her fingers moved almost effortlessly for hours, ultimately unveiling ornate designs that flowed into infinity. Nazil’s art was a creative expression of how she saw the world. It is a metaphor of her existence. Her life had blossomed like the intricate floral patterns that she drew so dexterously. It delighted and infused beauty into many lives. And mirroring mehndi’s ephemeral nature, Nazil’s earthly sojourn was a fleeting one. But unlike henna, ruhani (spiritual) essence does not fade – its eternity is symbolized in the subtle, intersecting patterns that she traced on many hands. 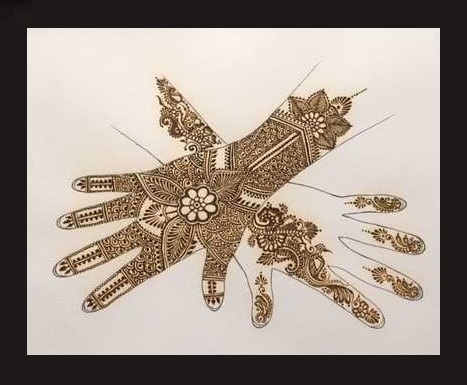 The art of Henna or Mehndi was Nazil’s passion for the last twenty years of her life.

Nazil’s artistic skill was much in demand at public fairs and weddings. Her art lives on in many treasured bridal albums. My sister passed on her skills to Nayab and Naseeba, who developed their own unique styles. Art became a way to serve. Mother and daughters frequently applied henna at full-day fund-raising events of the Canadian Cancer Society. Moving beyond the customary use of mehndi as body art, the three of them engaged in a newer form that finely traces henna on art paper. They have individually produced marvellous pieces. A selection of their work was exhibited at the Jubilee Arts Festival in Toronto in the Spring of 2018. A week after Nazil departed, a regular delivery of henna arrived at her home from India. The family’s mehndi art draws from the community’s cultural roots in Gujarat. Building on this age-old tradition, Nazil, Nayab and Naseeba have strived innovatively to transform it into a 21st century genre.

Nazil’s life was integral to the broad arc of time that is the community’s history. She was like many other Satpanthi Khoja Ismaili women of her time. They have been instrumental in passing on the skills, values and ethics of the community. Satpanth means “the true path” or “the path of truth.” Satpanthi women have been leading on the path of truth for generations. The world changes constantly, but the truth remains constant. Its value is eternal. The truth that Nazil expressed was manifested in her art and in her caring for others.

Her daughters are her living legacy. She has passed on the values, ethics and spiritual sensibility of Satpanth to them. We will continue to see Nazil Kara’s continuing presence in the world through Nayab and Naseeba’s accomplishments.

This is a story of one ordinary and extraordinary Satpanthi Khoja Ismaili woman.

We invite you to submit your condolences, memories and tributes to Nazil Kara by completing the feedback form below or by clicking on Leave a comment. Your comment may also be submitted to simerg@aol.com.