BY THE LATE JOHN FEENEY

“When the Nile reached its peak, the golden parasol was unfurled, trumpets sounded, and the caliph, mounted and clothed in sapphires and emeralds, emerged to the wonderment of his subjects…it was difficult for many spectators to catch even a brief glimpse of the passing caliph. But the very act of seeing him, it was believed, conveyed blessings upon the beholder.”

This pair of true-and false-color images from the Moderate Resolution Imaging Spectroradiometer was acquired on June 3, 2002. For thousands of years, the lower Nile valley (northern end) has been a cradle of civilization. Surrounded by deserts, the Nile river brings much—needed water to the land and people, making the valley into an oasis of agriculture and life. At its delta at the Mediterranean Sea, the Nile broadens into a large fan-shaped delta. All of Egypt’s large cities fall along the Nile, which sustains life in a region of scant rainfall. Photo Credit: Jacques Descloitres, MODIS Land Rapid Response Team, NASA/GSFC

Flowing out of a barren desert, from a source “beyond all known horizons,” the Nile had baffled the world for thousands of years. Regular as sun and moon, in the middle of burning summer, without a drop of rain in sight, when all other rivers on earth were drying up, for no apparent reason at all, the Nile rose out of its bed every year, and for three months embraced all of Egypt.

The ancient Egyptians knew when the flood would come, almost to the hour, but they never knew how much water it would bring to irrigate their fields. Egypt’s prosperity depended not only on the flood but also upon the accurate measurement of its height, for on that depended the allotment of water to its many users and the taxes they would have to pay in the coming year.

In the Middle Ages, each day during flood-time, the town crier walked the streets of Cairo announcing to the city the height of the rising Nile, although in drier years the actual height might be kept secret for fear of causing financial panic. “Twelve cubits today and the Lord is bountiful. God hath given abundance and watered the high fields,” he would say, to which a boy accompanying the crier would reply in his high-pitched voice, “Bless ye Muhammad.”

…The river having reached its anxiously awaited peak, preparations were made for the annual ‘Procession to the Nile.’ In 1047, the visiting Persian scholar Nasir Khosrau left a particularly rich description of the annual Fatimid procession celebrating the Nile’s inundation of Egypt.

For this great occasion, he wrote, the caliph [Imam al-Mustansir Billah] went personally to his treasury to select his symbolic regalia: parasol, turban, sceptre and sword. The sound of the palace band, which would accompany the procession, was so enormous that for three days before the event, massed drums and trumpets played continuously in the palace stables to accustom the animals to the noise. The job of decking out the processional route fell to the jewelers and tailors of the city, and this, too, always took three days and nights to arrange.

When the Nile reached its peak, the golden parasol was unfurled, trumpets sounded, and the caliph, “mounted and clothed in sapphires and emeralds,” emerged to the wonderment of his subjects.

Amidst clouds of incense, the procession of 10,000 men on horses moved off toward the great gate of Bab Zuwaylah, and beyond it to the flooding Nile.

From the surrounding rooftops, joining the din of drums, clashing cymbals and trumpets, “which sounded like thunder,” came choruses of the women’s ululations, “made by holding one hand under the nose and waggling the tongue in mid-scream.”

Leading the great procession were the sons and soldiers of the caliph’s princes (amirs). Then came the “amirs of the silver rods,” their symbols of office hung with little silver bells that jingled as they marched. Next came the “amirs of the collar,” two bearers of “the standards of praise,” and bearers of the symbolic inkstand and sword. Next came the mounted caliph surrounded by “men of the stirrup,” two at his horse’s bit, two at the neck, two at the stirrups, with the “commander of commanders” holding the caliph’s whip. The bearer of the golden parasol “took care to keep the caliph shaded from the sun,” while strategically placed in front of the caliph’s horse were two designated fly-swatters.

Amidst such a vast assembly of courtiers and crowd, it was difficult for many spectators to catch even a brief glimpse of the passing caliph. But the very act of seeing him, it was believed, conveyed blessings upon the beholder. 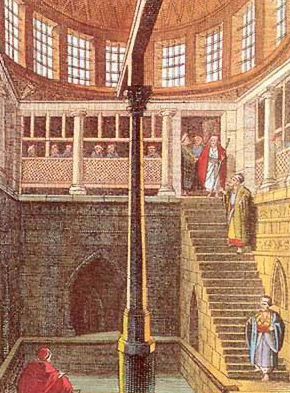 In both ancient and medieval Egyptt a nilometer was used to record how high the Nile was during the year. The nilometer was a staircase that proceeded down into the Nile with marks on it so the Egyptians knew how far the river rose. Image: TourEgypt.net

On reaching the Isle of Rhoda, the caliph dismounted, and the ceremony of anointing the Nilometer began. A mixture of saffron and mastic was handed to an official. Still in his clothes, he plunged into the flood-water and hung by his legs around the measuring column, dabbing on the perfumed mixture as readers above recited verses from the Qur’an.

The caliph went on to attend the opening of the “Canal of Egypt” (Al-Khalij al-Misri), which was kept dammed with stagnant water during the river’s winter months. At the canal, one of the caliph’s most magnificent silk tents was ready to give him protection from the summer sun. (Fatimid tents, transported on the backs of many camels, were portable palaces that took seven to nine years to make.) Amid more trumpet fanfares, the caliph thrust a spade onto the winter earthen dam and at once diggers attacked the dam with their hoes, cutting a series of narrow trenches across its surface. The impatient floodwaters quickly took over, eroding deeper channels, washing the dam completely away, and within an hour the life-giving flood reached the heart of all Cairo.

[Today] The Nile flood still comes, of course, but no one in Egypt sees it. Instead, it is contained in the immense inland sea called Lake Nasser, behind the Aswan High Dam. Here, Nile water collected year by year is led along neat narrow canals as unobtrusively as water coming out of a bathroom tap.

One of the fascinating aspects of viewing Earth at night is how well the lights show the distribution of people. In this view of Egypt, we see a population almost completely concentrated along the Nile Valley, just a small percentage of the country’s land area. The Nile River and its delta look like a brilliant, long-stemmed flower in this astronaut photograph of the southeastern Mediterranean Sea, as seen from the International Space Station. The Cairo metropolitan area forms a particularly bright base of the flower. The smaller cities and towns within the Nile Delta tend to be hard to see amidst the dense agricultural vegetation during the day. However, these settled areas and the connecting roads between them become clearly visible at night. Likewise, urbanized regions and infrastructure along the Nile River becomes apparent . This astronaut photograph (ISS025-E-9858) was acquired on October 28, 2010, with a Nikon D3S digital camera using a 16 mm lens, and is provided by the ISS Crew Earth Observations experiment and Image Science & Analysis Laboratory, Johnson Space Center. The image was taken by the Expedition 25 crew. The image has been cropped and enhanced to improve contrast. Lens artifacts have been removed. Credit: NASA

NASA astronaut Scott Kelly, recently past the halfway mark of his one-year mission to the International Space Station, photographed the Nile River during a nighttime flyover on Sept. 22, 2015. Kelly (@StationCDRKelly) wrote, “Day 179. The #Nile at night is a beautiful sight for these sore eyes. Good night from @space_station! #YearInSpace.” Image Credit: NASA

About the writer: The late New Zealand born filmmaker, photographer and writer John Feeney was among the early developers of wide-screen and large-format film techniques. For over 4 decades from 1963 onwards until his death in Wellington in 2006 at the age of 84, he divided his time between residences in Cairo and New Zealand. His piece (images excepted) is adapted from “The Last Nile Flood” which originally appeared in the May/June 2006 print edition of Saudi Aramco World, a publication to which Feeney regularly contributed for some 35 years.