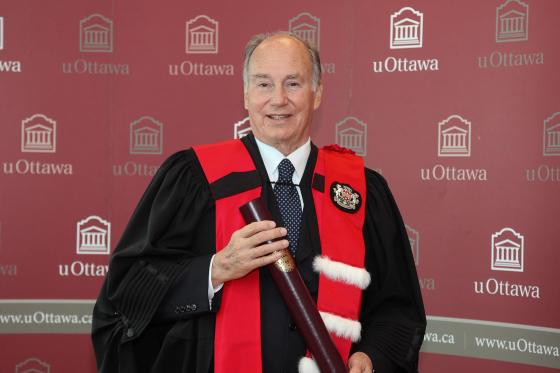 For over 60 years the Aga Khan Development Network (AKDN), under the leadership of His Highness the Aga Khan, the 49th hereditary Imam of the Ismailis in direct lineal descent of the Prophet Muhammad (may peace be upon him), has been building institutions and delivering essential services by creating schools and hospitals, newspapers and electricity generation plants, and social programmes of all kinds. These services have helped improve the lives of hundreds of millions of people of all races and faiths in places as varied as Cairo, Kabul, Delhi and Bamako.

We provide an organizational chart highlighting the breadth of the work of the Ismaili Imamat, and compile a piece about the most identifiable emblems, logos and seals of the AKDN.

FAMOUS LOGOS, SEALS AND EMBLEMS OF AKDN AGENCIES AND INSTITUTIONS

The Seal of Aga Khan University is a visual representation of the principles which underlie the founding of the University. The circular form of the Seal, with its different levels of imagery contained in concentric circles, has its visual roots in the rosettes of early Islamic periods. The circle also symbolises the world and reflects the international presence of the University.

At the centre of the Seal is a star, or sun. Light is a universal symbol for the enlightenment that education provides.The light emanating from the star is also symbolic of Nur (Divine light).

The star incorporates 49 points to commemorate the University’s founding by His Highness Prince Karim Aga Khan. The outer ring circumscribes a Qur’anic ayat rendered in classic thuluth script and reads as follows:

“And hold fast, All together, by the rope
Which God (stretches out for you),
And be not divided among yourselves,
And remember with gratitude
God’s favour on you:
For ye were enemies
And He joined your hearts
In love, so that by His grace
Ye became brethren” — Sura 3, Ayat 103.

In every language there are idioms and proverbs illustrating the importance of the right hand as an instrument of human skill, achievement and caring.

The Aga Khan Foundation logo is based on the right hand, and represents the humanitarian and positive philosophy underlying the Foundation and its activities.

In Islam, the hand has a number of meanings: its shape reflects its comprehensive and positive character, while its constituents represent the five principles of Islam and the five senses of the human body. The stylized fingers represent “Allah” in the Kufic script, and the interlacing beneath the fingers correspond to the anatomy of the hand and also delineates the sign, which in Chinese stands for Wisdom.

The logo of the Aga Khan Foundation was designed by Mr. Zahoor-ul-Akhlaq of Pakistan.

The emblem of the Aga Khan Health Services shown on the cup and saucer represents health care and compassion. The crescent is an ancient icon which, when used in red, has become the equivalent of the International Red Cross. The three-crescent design in its simple, poetic form creates an internal space symbolising how institutions and programmes using the symbol surround, attend and care for those in need.

The logo of the Aga Khan Award for Architecture was designed by Karl Schlamminger, a German Muslim of the Shia tradition.

The Name of Allah in Kufic script, reflecting Itself and repeating Itself, forms the basis of the logo design.

2 thoughts on “The Work of the Ismaili Imamat at a Glance, and the Most Famous Logos of the Aga Khan Development Network”