This is the first in a two-part series on projects that are underway to preserve and digitize Ismaili texts that are in danger of destruction, neglect or physical deterioration. We begin the short series with initiatives undertaken by Endangered Archives Programme with respect to rare Ismaili and other Central Asian texts at Semyonov’s Memorial Library in Dushanbe, Tajikistan, where the material is “becoming progressively worse because of inadequate care.”

Our second part will focus on documents from Badakhshan in Tajikistan and Afghanistan dating from the 16th to the 20th centuries that relate to Ismaili Imams, Nasir Khusraw and others, as well as property documents. They are being digitized through a National Endowment for the Humanities Collaborative Research Grant, with the support of Princeton University Library.

NOTE: The material published in this post is taken from the website of Endangered Archives Programme. We would like to credit the British Library Board for the copyright material; it is reproduced under the Creative Commons Attribution Licence.

The Endangered Archives Programme captures forgotten and still not written histories, often suppressed or marginalised. It gives voice to the voiceless: it opens a dialogue with global humanity’s multiple pasts. It is a library of history still waiting to be written. — Lisbet Rausing, Co-founder of the Programme

INTRODUCTION TO THE BRITISH LIBRARY AND THE ENDANGERED ARCHIVES PROGRAM

The British Library is the national library of the United Kingdom and gives access to the world’s most comprehensive research collection. It provides information services to academic, business, research and scientific communities. The Library has a collection of over 170 million items includes artefacts from every age of written civilisation. The Library keeps the nation’s archive of printed and digital publications, adding around three million new items to its collection every year.

The British Library administers the Endangered Archive Program (EAP), whose key objective since 2004 has been to facilitate the digitisation of archives around the world that are in danger of destruction, neglect or physical deterioration, and make it available to as wide an audience as possible. The British Library is responsible for managing and monitoring the research grant scheme, and ensuring the material digitised through the programme is consistently catalogued and discoverable online.

Archive types digitised so far through EAP include rare printed sources, manuscripts, visual materials, audio recordings running into more than 10 million images as well as 35,000 sound tracks. The continually expanding online collection is available freely through local archival partners, the EAP website and it is discoverable via the British Library catalogue, for research, inspiration and enjoyment. Generous funding from Arcadia, a charitable fund of Lisbet Rausing and Peter Baldwin, has enabled the British Library to provide grants to more than 400 projects in 90 countries worldwide, in over 100 languages and scripts.

One such very important project relates to the preservation of rare collection of materials on the Ismailis at Semyonov’s Memorial Library in Tajikistan.

PROFESSOR SEMYONOV AND THE STATE OF HIS MEMORIAL LIBRARY IN DUSHANBE

While travelling across Near East and Central Asia in the late 19th and early 20th centuries, Professor Semyonov and other Russian Oriental scholars collected valuable materials about the history and culture of the Ismaili people and, therefore, made a significant contribution to the study of Islamic philosophy, theology, and anthropology. The Ismaili people were not well known to many researchers and wider audiences and continue to be often misunderstood both in terms of their religious tenets and historical background.

Semyonov’s Library has not received sufficient funding to modernize its facilities….A large number of materials are in exceptionally vulnerable conditions and in danger of perishing if not digitised and properly cared for

The rare collections at Semyonov’s Memorial Library, which has been operating since 1958, sheds light on the rich culture and history of the Ismaili people, including their early stages of development in the pre-industrial periods, and provides invaluable materials for scholars and students of Ismailism, Islam, and Muslim cultures.

Physical conditions of the materials differ according to their age but overall, the physical condition of the whole collection of Semyonov’s Library is becoming progressively worse because of inadequate care.

Since the independence of Tajikistan from the Soviet Union in 1991, Semyonov’s Library has not received sufficient funding to modernize its facilities (e.g. to change window frames to prevent accumulation of dust and dirt inside the building). Manuscript cleaning and treatment technologies are outdated. None of the materials at the library have been properly digitised; the staff scanned some materials using regular office scanners, but the scanned copies are of poor quality. Moreover, some manuscripts have been badly eaten by insects and are damaged around the edges because the library cannot afford to buy special insect repellents.

In addition to insufficient government funding, less attention was paid to the rare collections at Semyonov’s Library by donor agencies despite the fact that the collections are an important cultural, historical, and intellectual heritage. Manuscripts located at the library are mainly from the late 18th to early 20th centuries. Newsletters, periodicals, and other publications are from the early 20th century. A large number of materials are in exceptionally vulnerable conditions and in danger of perishing if not digitised and properly cared for.

In 2014, a grant was given to Dr Sunatullo Jonboboev to investigate the potential to digitise the endangered archives at Semyonov’s Memorial Library for a future major project. This was in alignment with the University of Central Asia’s mission to help the different peoples of Central Asia to preserve and draw upon their rich cultural traditions and heritages as assets for the future.

An outcome of this project was that the University of Central Asia and Semyonov’s Memorial Library within the Institute of History and Ethnography of the Academy of Sciences of the Republic of Tajikistan, signed an agreement to work together to preserve the endangered archives of the library.

Over the course of the project, the team developed an electronic catalogue for the library, which comprises of 8611 library holdings — valuable books, manuscripts, guides, dictionaries, encyclopaedias on Central Asian cultures and languages, articles and monographs. From the total holdings of the library, 396 books are in Arabic and Persian; 112 manuscripts; 284 lithograph; 413 books in English; French and German. The holdings in Russian, 7802 items, have been also catalogued, which consist of 6021 reference books, dictionaries and brochures; and 1781 journals. The team also organised the library’s holdings, re-shelving, labelling, cleaning and in addition partly repaired 2170 books.

It has become possible, for the first time, to develop an electronic catalogue for the full collection of the library, many of which are rare and valuable books and manuscripts, due to the support of the project. The catalogue is divided into three separate catalogues: in Russian, Persian and English. The links to the PDF catalogue files are provided below:

(1) Catalogue translated from Persian and Tajik (PDF document 613KB); and

Simerg has come across an extremely rare collection of ginans that were recorded on 78-rpm shellac gramophone records in Mumbai, India between 1935-1955. The ginans accompanied by music are part of a huge collection of almost 1427 original film, music, classical music, folk music, publicity and educational material that have so far been digitized by the  British Library in London, England as part of their Endangered Archives project. A 24 month grant of £21,300 (sterling pounds) for this project was awarded to an independent researcher, Dr. Suresh Chandvankar, in 2008.

During 1930-55, the British and German record manufacturing companies were well established and had a major share of disc manufacturing in India. The ‘Young India’ record label was an ‘indigenous’ effort at record production by ‘The National Gramophone Record Manufacturing Company Ltd. Bombay’ and during the twenty year period produced 10,000 titles on hundreds of 78-rpm shellac gramophone records in Mumbai. Mainly amateur and upcoming artists were recorded under the ‘Young India’ label. The company ceased to function in 1955 so these recordings were never reissued on audio tapes and CDs. Hence, the British Library felt it important and relevant to preserve these invaluable recordings and the associated documents. 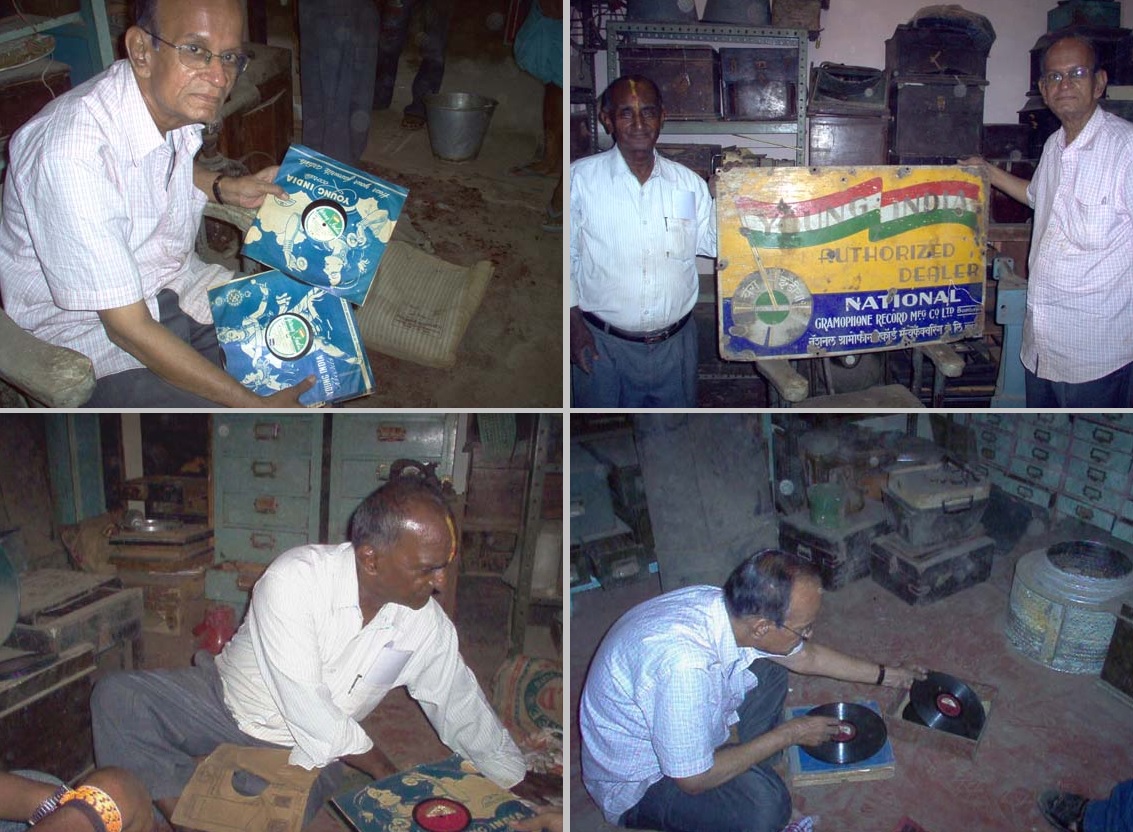 The repertoire covered music from different regions of India and sung in many different languages. During the long tenure of over twenty years, Indian citizens witnessed several important events such as the movement and struggle for freedom, Indian Independence in 1947, World War II and the beginning of the romantic period of independent India. This was also reflected in the records produced. Thus, there are speeches of great leaders, ballads, skits and dialogues on a number of subjects depicting changing social and political situations.

In late 1948, the ‘National Gramophone Record’ factory at Wadala was experiencing both technical and financial problems which severely curtailed its production capacity. The situation worsened slowly and by late 1955, the factory had closed down with stocks left over at the factory sold off at greatly reduced prices to a number of agencies. With time, the records and catalogues were either destroyed or scrapped. Slowly, all the material related to this company began to disappear.

It is estimated that over 1,000 records are available in the private collections of record collectors, located in Mumbai, Ahmadabad, Delhi, Chennai and Kolkata, and are only available on 78-rpm breakable shellac discs. In addition, over 100 catalogues, booklets and record sleeves are held by private collectors and it is possible to collect or borrow them for this project. These have never been sold commercially, with the result that very few copies have survived to the present.

Through the British Library project endangered archival material pertaining to ‘Young India’ record label will be restored, digitised and thus preserved for posterity.

The project succeeded in locating and digitising over 725 discs (1450 songs) of the ‘Young India’ record label. A large number of catalogues and advertising material was located at many places and more than 1,000 digital images have been taken of documents and disc labels. This will form a very valuable reference source for researchers in the future.

Here are the links to the recitation of Ginans performed by numerous individuals including Master Jumma, Rama, Kumari, and Rahemali.

(Note: Once you are on the British Library page when you have clicked on a Ginan link below, remain on that page and click under Related Items to listen to other Ginans – you need not use the back arrow to return to this page for links to other recordings).

Last updated: September 24, 2017, 03:51 am) – Correction: In the first version of this post it was incorrectly mentioned on the title and elsewhere in the article that the archives are at the British Museum. The Endangered Archives Project is an initiative of the British Library and not the British Museum. We apologize for this oversight.

We welcome your feedback. Please click Leave a comment. Do you have any information about Master Jumma, Rama, Kumari, Rahemali, and others who were involved in the singing of the ginans? Let us know! If you encounter any technical issues in submitting your comment, please send your feedback to Simerg@aol.com, Subject: Ginan archives.