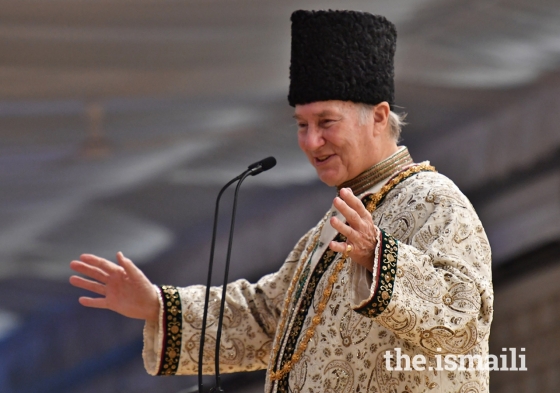 His Highness the Aga Khan, Mawlana Hazar Imam, at the Dar es Salaam Darbar in October 2017. He will grace the Eastern Canadian Ismailis with his didar in November 2017.

(Note: We will have regular updates leading upto the visit; here are the latest updates for this blog):

Ismailis in Eastern Canada will, inshallah, be graced with the holy visit of their beloved 49th Imam, His Highness the Aga Khan, during the month of November 2017. The announcement of the visit by the Ismaili Leadership International Forum (LIF) came as a big surprise, and thousands who were present in Jamatkhanas across Canada on Friday, October 27,  gasped with delight when the news of the visit was read out. At the Ismaili Centre in Toronto, the Jamat was informed about the visit  by the Chairman of the LIF, Mahmoud Eboo, who is also the representative of the Aga Khan Development Network (AKDN) in Canada.

The exact dates and details of the visit were not announced on Friday. However, an update on Saturday October 28th, stated that Mawlana Hazar Imam’s mulaqats with the Eastern Canada Jamat, which will include religious work, will take place in Toronto for the Ontario region and in Montreal for the Quebec and Maritime Provinces.  Although located in Ontario, the Jamat in Ottawa, Canada’s capital, will join hands with the Jamats of the Quebec and Maritime Provinces in Montreal.

This will be the third visit by the Aga Khan to his followers during his Diamond Jubilee year that commenced on July 11, 2017, when he completed 60 years of his reign. Earlier in October, he made official visits to Uganda and Tanzania at the invitation of the two governments. During the five day tour that began on October 8th, Mawlana Hazar Imam graced the Ismailis with momentous Darbars (lit. a court or audience chamber where kings had formal or informal meetings) in Kampala and Dar es Salaam.

On this most auspicious and joyous news of Mawlana Hazar Imam’s forthcoming visit to Canada, we convey our heartiest felicitations to Ismailis in Canada and around the world and offer a humble supplication with the following words taken from a Ginan by Pir Hasan Kabirdin (14th century).

With hope O Ali I stand at Thy door,
With palms joined I sincerely beg of Thee;
Bless me with Thy Holy Didar, O Great Lord and Benefactor!
At Thy Feet I fall to prostrate.

*Ismaili doctrine emphasizes the principle of the Unity of Imamat under the superficial diversity exhibited by each Imam of the Time. It is in this sense that the Ismailis believe that Imam is the same irrespective of his own age or the time he lives in. Thus, the name of the first Imam, Hazrat Ali, is commonly invoked for each Imam of the Time.

The proverbial valour and exemplary statesmanship of Imam Mawla Murtaza Ali, the encyclopaedic erudition of Imam Ja’far as-Sadiq, the extraordinary intellectual brilliance of Imam al-Hakim bi Amrillah, the administrative ability of Imam Mustansir Billah (during the first half of his Khilafat), the political acumen of Imam Sultan Mahomed Shah, Aga Khan III (he defied geography and created history), the organizing genius of the present Imam, Mawlana Shah Karim al-Husayni, are only some of the more spectacular characteristics exhibited by the Imam of the Time in accordance with the exigencies of the situations facing him.

14 thoughts on “Mawlana Hazar Imam, His Highness the Aga Khan, to Bless Ismailis in Eastern Canada with Didar in November 2017”