“Prophet Muhammad believed that freedom of religion and civic rights were important components of a ‘Muslim Nation’….His covenants with Christians can be viewed as a kind of medicine to cure the diseases of Islamic extremism and Islamophobia.” — Rice University Study 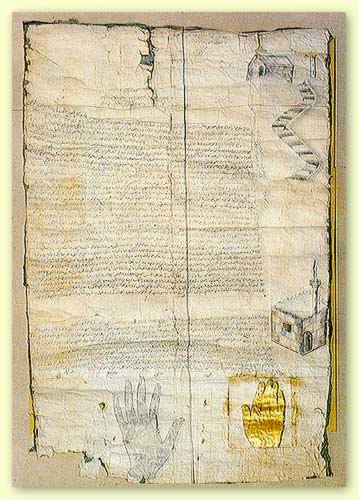 The Covenant with the Monks of Mount Sinai was commissioned by Prophet Muhammad, with Hazrat Ali as its scriber. Manuscript copies are from Saint Catherine’s Monastery, and Simonopetra. Photo: Wikipedia.

The following piece is adapted from a report released by Rice University – ed.

Prophet Muhammad believed that freedom of religion and civic rights were important components of a ‘Muslim nation,’ according to a Rice University analysis of the Prophet’s covenants with Christians.

Researcher Craig Considine, a lecturer in Rice’s Department of Sociology, argues that the covenants can be used to develop a stronger democratic partnership between Muslims and Christians in the Islamic world and elsewhere. His study is published in the journal Religions under the title “Religious Pluralism and Civic Rights in a ‘Muslim Nation’: An Analysis of Prophet Muhammad’s Covenants with Christians.” It can be downloaded through the link provided at the bottom of this post.

“These covenants were designed to protect and even defend peaceful Christian communities, not attack them,” Considine said. He found that these agreements established freedom of religion and civic rights for Christians living within the “ummah” (Arabic for “community”). “The research clearly shows that contemporary Islamic states that mistreat and discriminate against Christians cannot be justified in light of Prophet Muhammad’s covenants,” adds Considine.

In “The Covenant of the Prophet with the Christians of Persia,” the Prophet was emphatic on the issue of complete religious freedom:

“And even as they honor and respect me, so shall Muslims care for that people as being under our protection and whensoever any distress or discomfort shall overtake (Christians), Muslims shall hold themselves in duty bound to aid and care for them, for they are a people subject to my Nation, obedient to their word, whose helpers also they are. It therefore is proper for my sake to attend to their comfort, protection and aid, in face of all opposition and distress, suppressing everything that becomes a means to their spoliation,” the Prophet wrote.

Considine said a similar — if not identical — passage is found in the three other covenants addressed in this paper.

HIS HIGHNESS THE AGA KHAN ON THE ETHIC OF PLURALISM

“A cosmopolitan ethic is one that welcomes the complexity of human society. It balances rights and duties, freedom and responsibility. It is an ethic for all peoples, the familiar and the Other, whether they live across the street or across the planet…..Sadly, the world is becoming more pluralist in fact, but not necessarily in spirit. “Cosmopolitan” social patterns have not yet been matched by “a cosmopolitan ethic.”…..As you build your lives, for yourselves and others, you will come to rest upon certain principles. Central to my life has been a verse in the Holy Qur’an which addresses itself to the whole of humanity. It says: “Oh Mankind, fear your Lord, who created you of a single soul, and from it created its mate, and from the pair of them scattered abroad many men and women…” I know of no more beautiful expression about the unity of our human race — born indeed from a single soul.” — Excerpts from the Aga Khan’s speech made to the Parliament of Canada, Ottawa, February 27, 2014.

“Prophet Muhammad made it clear that freedom of religion is an inherent right for Christians living in a Muslim nation,” he said. “His cordial relations with Christians were not due merely to political expediency or personal aspirations, but rather they resulted from his belief that Christians should be able to freely practice their own faith in accordance with their own will. Christian Persians were under no compulsion whatsoever to accept or reject Islam.”

Considine also noted that Prophet Muhammad believed that a Muslim nation must also extend civic rights to Christian religious leaders, as discussed in “The Covenant of the Prophet with the Christians of the World.” The Prophet wrote:

“The covenant of Allah is that I should protect their land, their monasteries, with my power, my horses, my men, my strength and my Muslim followers in any region, far away or close by, and that I should protect their businesses. I grant security to them, their churches, their businesses, their houses of worship, the places of their monks, the places of their pilgrims, wherever they may be found.”

“The Prophet Muhammad did not want to inflict harm on Christians, nor interfere or encroach on their privacy or private property,” Considine said. “For the state to give preference to one or more groups means devaluating citizens based upon their ethnic or cultural backgrounds.”

Considine said documents have been located in obscure monasteries around the world and books that have been out of print for centuries.

Considine said the rediscovery of these documents provides an opportunity to give new birth to Islam and regenerate the essence of Islamic teachings. He hopes that the findings will have a positive impact on the impressions of Muslims in today’s society and will combat anti-Muslim sentiments.

“Prophet Muhammad’s covenants with Christians can be viewed as a kind of medicine to cure the diseases of Islamic extremism and Islamophobia,” Considine said. “His message radiates compassion and peace. This is what American society — and indeed the world — needs now more than ever.”