Editor’s note: Naren Varambhia, an avid reader of Simerg residing in London, England, recently brought to our attention a piece on cricket which Premji Vaghela had contributed for a “Dar-es-Salaam Jambo Reunion” that took place in Toronto, Canada, on August 9-10, 1997.

We are pleased to publish this highly interesting piece after contacting Mr. Vaghela’s sons, Rajnikant and Niranjan of London and Toronto respectively. We learnt from them that their beloved father has been living in Toronto since 1985, and that the family celebrated his 100th birthday last December! We offer our good wishes to Mr. Vaghela and his entire family for this blessing of a long life.

Both Rajni and Niru mentioned that they have stayed in touch with several Dar-es-Salaam cricketers, including Ismaili cricketers Hasnu Kalyan, Mamda Kassam and Badru Bhamji who played for the Aga Khan Club and Tanzanian national cricket squad for many years.

We are indebted to Mr. Vaghela’a family for this memorable and historical piece, which includes a very rare photo of the 48th Imam of Ismaili Muslims, His Highness the Aga Khan, Mawlana Sultan Mahomed Shah, meeting cricketers Mamda Kassam and Premji Vaghela, among others, at Dar-es-Salaam’s Gymkhana cricket ground.

Mr. Premji Vaghela was awarded the cup on the left for scoring 150 runs in a cricket match. The plaque on the right was given to him for his contribution to the Hindu Sports Club. Photo: Premji Vaghela Family Collection. Copyright.

My School Days and Cricket

I was born in Dar es Salaam in 1915 when the British were bombing Dar, when it was under German rule, and the people took shelter in the Jangwani Creek.

I started playing cricket bare-footed at the age of seven with a tennis ball and a locally made wooden bat. Dar streets were our  playgrounds and street lamp posts or dust-bins were our wickets. Those days, in the early twenties, the streets were safe to play in as there were no cars — only rickshaws. Few cars were seen after 1931.

I studied in a Gujarati school called Lokmanya Tilak Memorial School, where Arya Sukh Shanti Lodge is presently situated. After 1918, Tanganyika was called British Protected Territory. The Indian Central School (ICS) was built by the Government in 1929. All the teachers were recruited from India. All the students — boys and  girls — from Tilak school were transferred to this new school. The first headmaster of the new school was Mr. N. O. Mody, a very strict disciplinarian He introduced cricket in the school. It was this school that supplied the most cricketers to all the communal teams in Dar-es-Salaam till 1960.

I earned my name as a bowler and batsman. My first century came in 1932 against the Punjebhai Club (later known as the Aga Khan Club). We did well in the League Tournament. In the knockout tournament in 1934, the school came in the final against the British Gymkhana Club. I scored 150 runs and we piled up a huge score of over 300 runs. We won the knock-out Cup.

In 1932, Mr. A.A. M  Isherwood, then the Director of Education, donated a cup called the “Isherwood Cup”* (see note below) for cricket to be competed by the schools in Dar. There were only two schools at that time: the ICS and the Aga Khan School. We won the trophy  in 1932. It was a coincidence that in 1956 — almost after 25 years —  my son Rajni, when he was school captain, brought the same trophy home. I left the school in 1935. The school had a very good reputation in cricket. 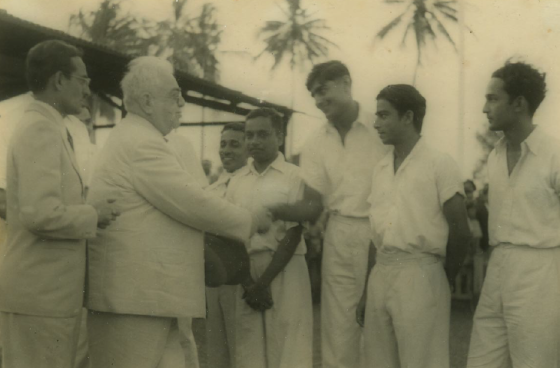 His Highness the Aga Khan (1877 – 1957), 48th Imam of Ismailis, meeting with Mamda Kassam, Premji Vaghela and others at the Gymkhana Cricket Ground in Dar-es-Salaam. Photo: Premji Vaghela Family Collection. Copyright.

In 1936, I joined the Indian Sports Club. At that time there were few teams competing in the League Tournament – the “Sachu Pira Shield”. One of the conditions of League matches was that whichever team won for three consecutive years, would retain the Shield forever. In 1936, 1937 and 1938, the Indian Sports Club were the winners and won the Shield permanently. Today, the Shield is on  display in G.M. Sulemanji’s Hardware shop window on Independence Avenue (then Acacia Avenue).

Many young and promising players were coming out from the school, and there were not sufficient teams to accommodate them.  Consequently, the Indian Sports Club was split into two communal teams: the Hindus and the Bohras. The Goans, the Ithnasharis and the Aga Khan teams were already there. By 1940, many other teams cropped up; Punjab Sports Club, the Maratha Mandal, Sinhalese Sports Club  and Malabar Sports Club were new additions. Customs Sports Club and the P.W.D. also joined the cricket competition. The Khalsas and the Goans were the main hockey rivals.

On match days, the whole Asian population turned out on the Gymkhana and the Government Service cricket grounds which were adjacent to each other. The whole atmosphere was like festivals. Machunga (oranges), makai (corn), madafu (coconut), sekela-bafela jugu  (fried-boiled peanuts) and ndhizi (plantains) were always in demand.

I must also mention names of two Englishmen: Mr. F. H. Woodrow, the Director of P.W.D, and Mr. Hudson, the Commissioner of Customs and Excise. They both took keen interest in promoting cricket. There were not enough cricket grounds in Dar then. Mr. Woodrow gave the P.W.D. ground, and Karimjee donated the Bohra’s ground. I consider it only fair to mention the name of Seth Abdulkarim Y.A. Karimjee, of the wealthy and philanthropic Karimjee Jivanjee family. He always supported the cause of cricket  in Dar. He was a good cricketer himself and a thorough sportsman. He was kind, helpful and unassuming.

I should not also forget the grand old man, Count Kassum Sunderji Samji, who donated trophies to cricket and tennis competitions in Dar. He always supported sports one way or the other.

Cricket was the most popular sport in Dar. The competitors were keen and played in high spirit. Sometimes, the communal tension was high, particularly when the Hindus and the Aga Khan Clubs were playing. At times the police were called to control the overenthusiastic supporters of both sides! However, on and off the field, the personal relationship between the players was always cordial and friendly.

Cricket was also played in Mwanza, Tabora, Dodoma, Moshi and Tanga. Cricket was particularly popular in schools and carried on by kids playing in the streets.

Perhaps the most enjoyable competition, for almost all cricketers, was when Dar and Zanzibar used to visit each other every year in early August. Every alternate year we used to play in Zanzibar and vice versa. Many tourists used to accompany the teams and create considerable excitement and jubilation, just like a big festival!

In order to strengthen their side during the final or critical stage in the competition, it was a practice among certain teams to import players from Zanzibar, Mombasa and other centres, during the weekends. Such practices later on were banned by the Dar-es-Salaam Cricket Association.

Unfortunately, the status of cricket has changed considerably due to various reasons: shortage of cricket grounds, lack of encouragement in schools and the high cost of cricket gear·. Considering all these factors, I think cricket will eventually die out in Dar. This is the unfortunate reality of life.

During my cricket career in Dar-es-Salaam, I scored five centuries and taken a great many wickets. These were, undoubtedly, the happiest years of my life.

*The Isherwood cup was played in Dar for many years until the late 1960’s. The editor of this blog played in the Isherwood cup for Shabaan Robert from 1967-1969, and featured prominently in the school’s victories during the 3 year period. Pranlal Divecha and Tahir along with Ismaili brothers Shiraz and Abdul Sumar were the top ranked players for Shabaan Robert when they shockingly defeated the favourites Aga Khan Secondary in the 1965 semi-finals/finals. All four went on to play for the Tanzanian squad. Prior to 1965, the cup was dominated for several years by Aga Khan School, whose arch rival was Azania School, located near Muhimbili Hospital. All rounder John Solanki was one of the most well-known players for Aga Khan Secondary — the all-rounder went on to play for England’s county team, Glamorgan, during the 1970’s. By 1971, the Isherwood cup became a non-entity, as there wasn’t any competitive spirit or interest left in the game at the school level. We will be happy to receive an update on the state of Tanzanian school cricket today, and whether the Isherwood has been revived– ed.

Share your cricket memories of Dar-es-Salaam and other parts of East Africa. Click Leave a comment or write/send photos to Simerg@aol.com. All correspondence will be promptly acknowledged.

What is the state of cricket in Dar-es-Salaam today? Has cricket become a mainstream sport? Please submit your feedback at Leave a comment.