INTRODUCTION: On February 18, 1976, His Highness the Aga Khan, Mawlana Hazar Imam, accompanied by Begum Salimah Aga arrived in Pakistan for a month long visit that included several mulaqats with Ismailis around the country. During the visit they both attended numerous public and private events and engagements and Mawlana Hazar Imam announced the creation of the Aga Khan Award for Architecture. The first cycle of the award ceremony was held at the beautiful Shalimar Gardens in Lahore in 1980.

The extended 1976 visit also co-incided with Pakistan hosting the Seerat Conference over a 10 day period at which eminent scholars from around the world spoke in Islamabad, Lahore, Peshawar and Karachi on various aspects of the life of the Holy Prophet Muhammad (may peace be upon him). When the Aga Khan was invited by Mowlana Kausar Niazi, Pakistan’s Federal Minister for Religious Affairs, to preside over the Seerat gathering that took place in Karachi on March 12, 1976, he noted at the beginning of his presidential that he felt both trepidation and joy at the opportunity, “trepidation because few subjects could be more awe inspiring for any Muslim to speak on, joy as few subjects could give greater happiness to be involved with.”

As hundreds of millions of Muslims around the world prepare to celebrate the life of the Prophet on the occasion of his birth anniversary that falls on the 12th of Rabi al-Awwal — between November 29 and December 3, 2017 — no piece would be more befitting for the auspicious anniversary than the inspiring and insightful words spoken at the Seerat Conference by the direct descendant of the Prophet Muhammad himself. We are pleased to present the following excerpts from 49th Ismaili Imam’s Seerat speech, following which we have included the audio of the speech. 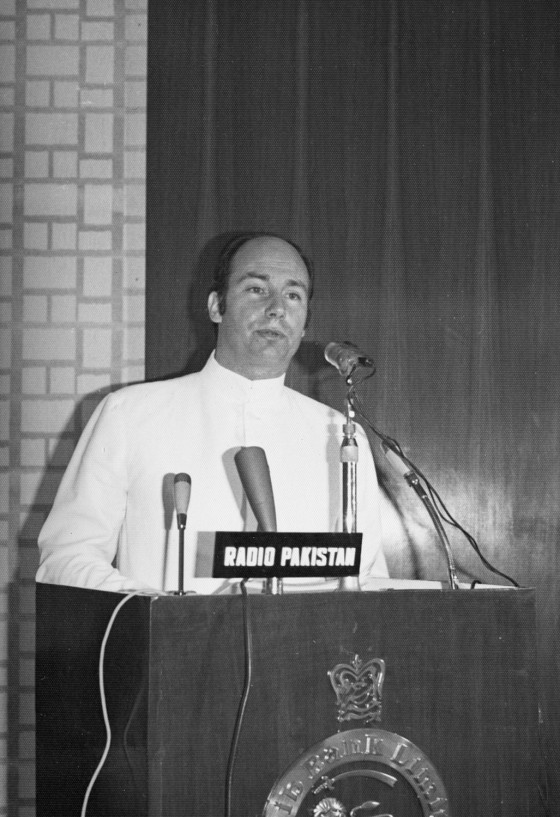 His Highness the Aga Khan giving his Presidential Address at the Seerat Conference in Karachi on March 12, 1976. Photo: The Ismaili.

A request to the conference

“Few conferences can have gathered so many men of outstanding intellect, who have devoted so much time and wisdom to the study of Islam and the life of the Holy Prophet, peace be upon him….I will begin by making a request: One hundred and seventy two eminent scholars from forty-eight countries have gathered in Islamabad, Lahore, Peshawar and Karachi to present the results of their research and reflection on various aspects of the life of the Holy Prophet. From all these exchanges, from all the private debates which have preceded and succeeded the presentation of each paper, will have come an immense range of new thoughts, new ideas and new understanding of the Prophet’s life. I sincerely request that you have available to all Muslims a complete printed record of these papers and the subsequent debates.”

“The poorer countries of Islam have ahead of them years of increasingly hard work if they wish to progress materially to acceptable standards of every day life. The richer countries, especially those that have new means, will rapidly find that this wealth, blessing that it is, will impose upon them heavy new responsibilities. They will have to administrate this wealth wisely, in the best interest of their citizens, but also keeping in mind that they have a heavy responsibility to their less well endowed brother Muslim countries, and indeed to the human race at large. Thus it is my profound conviction that Islamic Society in the years ahead will find that our traditional concept of time, a limitless mirror in which to reflect on the eternal, will become a shrinking cage, an invisible trap from which fewer and fewer will escape.”

Holding firm the ship of life: Answers in the Qur’an and the Prophet

“I have observed in the Western world a deeply changing pattern of human relations. The anchors of moral behaviour appear to have dragged to such depths that they no longer hold firm the ship of life: what was once wrong is now simply unconventional, and for the sake of individual freedom must be tolerated. What is tolerated soon becomes accepted. Contrarily, what was once right is now viewed as outdated, old fashioned and is often the target of ridicule.”

“In the face of this changing world, which was once a universe to us and is now no more than an overcrowded island, confronted with a fundamental challenge to our understanding of time, surrounded by a foreign fleet of cultural and ideological ships which have broken loose, I ask, “Do we have a clear, firm and precise understanding of what Muslim Society is to be in times to come?” And if as I believe, the answer is uncertain, where else can we search then in the Holy Qur’an, and in the example of Allah’s last and final Prophet?

“There is no justification for delaying the search for the answer to this question by the Muslims of the world, because we have the knowledge that Islam is Allah’s final message, the Qur’an His final book and Muhammed His last Prophet. We are blessed that the answers drawn from these sources guarantee that neither now, nor at any time in the future will we be going astray. As the demands on his time increase, every Muslim will find it more and more difficult to seek for himself the answer to the fundamental question of how he should live his life for it to be truly Muslim. It is men such as you who will have to bring forth the answers, answers which will have to be practical and realistic in the world of today and tomorrow. Rather than let force of circumstance impose upon us through our default in not having suitably prepared ourselves for the future, ways of life which are not or should not be ours, we must ourselves design the path we should tread.”

“In seeking to define what our Islamic Society should be in times ahead, 50 and 100 and 200 years hence we should, I believe, be aware that the Muslims of this world cover such an amazing range of historical, ethnic and cultural backgrounds that a completely monolithic answer may not be found. I am convinced on the other hand, that we do want to avoid so much diversity that our Muslim countries are in conflict amongst themselves or that they are so divided that they are incapable successfully of facing common enemies, be they cultural, religious, national or otherwise. This is why I so applaud Pakistan for having organized the first Muslim Summit Conference, and now this Seerat Conference, for it is only through dialogue, personal contacts and continuous exchanges that the great diversity of cultures, knowledge, outlook and resources can be co-ordinated and brought to bear fruit for the Muslim world.”

“Let me return, now, to the question of what Muslim Society should seek to be in the years ahead. Islam, as even non-Muslims have observed, is a way of life. This means that every aspect of the individual’s daily existence is guided by Islam: his family relations, his business relations, his education, his health, the means and manner by which he gains his livelihood, his philanthropy, what he sees and hears around him, what he reads, the way he regulates his time, the buildings in which he lives, learns and earns.

“I cannot think of any time in Islamic history when Muslims have had a greater opportunity to unite, and to ensure that the society in which they live is that which they have defined and chosen for themselves.

“Not only are all forms of human communication easier than ever before in history, but rarely, if ever has the Muslim world had such means to ensure its future. Conferences such as this seeking inspiration from the life of the Holy Prophet could render no greater service to Islam than to assist in defining what steps can be taken, where, and how, to ensure that our people can live in the years ahead in greater peace, greater prosperity and in an Islamic Society which will not be overrun or simply taken by surprise, by forces, pressures or concepts which are totally alien and may damage us irretrievably.”

Searching for a solution through eminent men and women

“In our search for a solution, I am convinced that we must call upon our own men and women, who have achieved positions of eminence anywhere in the world, and persuade them to return, for us to benefit from their knowledge, their learning and their work. All too often in my journeys I have met or learnt of outstanding Muslim scholars, doctors, scientists, and architects who have remained abroad, or who, when they do come home, have failed to receive the support and encouragement necessary for them to bring to their nations’ benefit their Muslim outlook on key areas of modern progress.

“Any meaningful human endeavour, any original thinking, any authentic research, will require moral encouragement and material support. This we must provide, not only during the individual’s initial years of learning, but equally when he leaves the restricted life of his academic centre to enter into the wider world of national or international activity.”

The inspiring life of the Holy Prophet

“The Holy Prophet’s life gives us every fundamental guideline that we require to resolve the problem as successfully as our human minds and intellects can visualise. His example of integrity, loyalty, honesty, generosity both of means and of time, his solicitude for the poor, the weak and the sick, his steadfastness in friendship, his humility in success, his magnanimity in victory, his simplicity, his wisdom in conceiving new solutions for problems which could not be solved by traditional methods, without affecting the fundamental concepts of Islam, surely all these are foundations which, correctly understood and sincerely interpreted, must enable us to conceive what should be a truly modern and dynamic Islamic Society in the years ahead.”

Audio of the Aga Khan speech made at the Seerat Conference

Simerg welcomes your feedback. Please complete the LEAVE A REPLY form below or send your comment to simerg@aol.com.

Note: This article also appears on http://www.barakah.com, a special Simerg project to celebrate 60 years or the Diamond Jubilee of His Highness the Aga Khan.

One thought on “His Highness the Aga Khan on the Holy Prophet Muhammad (s.a.s.) – with audio”