INTRODUCTION: Founded in 1764, Brown University, the seventh-oldest college in the United States, is celebrating the 250th anniversary of its founding this year. As part of this anniversary, His Highness the Aga Khan, the 49th Imam of Ismaili Muslims, will deliver a Stephen A. Ogden Jr. ’60 Memorial Lecture on International Affairs at Brown University on Monday, March 10, 2014, at 5 p.m. The ceremony will be will be carried live  at http://www.brown.edu/web/livestream/.

Since 1965, the Ogden Lectures have been the most distinguished of their kind, serving both the Brown and Rhode Island communities in the field of International Relations.

Stephen A. Ogden Jr., an active member of the Brown class of 1960, was seriously injured in an automobile accident in the spring of his junior year. After a valiant fight for life, he died in 1963. Established by his family, the Ogden lectureship came into being two years later as a means of achieving in some small measure what Steve Ogden had hoped to accomplish in his life: the advancement of international peace and understanding.

The Ogden Lectures are a living tribute to the memory of a young man who had hoped to devote his abilities and energy to the field of international relations. These lectures have brought to the University and to Rhode Island a large number of U.S. and foreign diplomats as well as many other observers of the international scene. All have given lectures, free and open to the public, on current world topics.

His Highness the Aga Khan, the direct descendant of the Prophet Muhammad (s.a.s) and 49th Imam, pictured at Brown University in May 1996. Photo: Akdn.org

A family member living overseas called me in Philadelphia, USA, during the third week of May in 1996, and asked me to obtain a speech that he thought Mawlana Hazar Imam, His Highness the Aga Khan, had already delivered at Brown University in Providence, Rhode Island, earlier that month. Without waiting another second, I called Brown’s main number, and was swiftly connected to a very kind and knowledgeable gentleman. When I requested for a copy of the speech, he informed me that the speech had not yet been delivered and that His Highness would be addressing the University’s Baccalaureate Service during the coming Memorial Day Weekend. Obviously, my next question was if I was permitted to attend the event, and without hesitation he asked me to come over and bring my friends too! He explained that the address would take place at the First Baptist Church, where sitting would be limited to the graduating students. However, all the visitors would be able to watch the videocast on a large-screen on the College Green. I thanked him with all my heart. But before wishing me good-bye, he thoughtfully asked me to spend an extra day in Providence, as Mawlana Hazar Imam along with eight other individuals would also be conferred with an Honorary Degree at a special University Ceremony on the same Green.

The Memorial weekend was only two days away! I rushed to get a rented car and prepared for the event, including purchasing a couple of $9.00 disposable cameras from a nearby drugstore in downtown Philadelphia, where I lived. I set out for the 6 hour drive on Saturday morning, May 25th. I first stopped at Scranton University and attended my cousin Akber’s graduation ceremony. I then proceeded to Connecticut to meet Anaar Naran, a close family friend who was my younger brother Fahar’s teacher at Dar-es-Salaam’s Aga Khan Boys Primary School in the 1960’s.

The following morning, Sunday, 26th May, upon reaching Providence, I first decided to locate the whereabouts of the Green. Satisfied, I checked into a nearby hotel and returned with immense excitement to the event site well before the start of the 1:30 pm Baccalaureate Service in the First Baptist Church.

May 26, 1996: His Highness the Aga Khan receives a standing ovation at the conclusion of the Baccalaureate Address at Brown University, Providence, Rhode Island. Next to him is Vartan Gregorian who was then President of the University.

Seated at the front of the Green, I witnessed the entire ceremony on the large screen that had been set-up. The ceremony  embraced lively expressions of thanksgiving, harmony, and rhythm and included music and spiritual readings from Islam, Christianity and Hinduism as well as other faiths, incorporating the many spiritual and cultural traditions of the Brown community. The program that was distributed contained the texts of the spiritual readings. I was captivated and deeply touched by the distinguished and dignified ceremony which respected and recognized world-faiths.

As I heard a Hindu reading which alluded to the Lord Vishnu as the Preserver of the Universe and one who would manifest himself again, my thoughts turned to that notion of manifestation as presented by Ismaili missionaries and Pirs in some of their ginans, which were aimed at converting Hindus to the Ismaili faith. 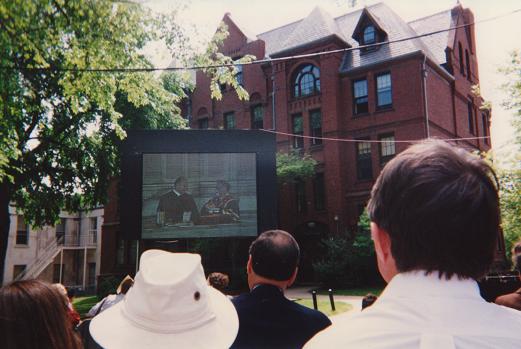 May 26, 1996: An audience at Brown University’s “Green” watches a live telecast from the Meeting House of the First Baptist Church where the Aga Khan delivered the Baccalaureate Address to graduating class. Photo: Abdulmalik Merchant

The entire service including President Gregorian’s and Mawlana  Hazar Imam’s speeches (Vartan Gregorian’s Tribute to His Highness the Aga Khan at Brown University in 1996) was overpowering and unforgettable, and I was given an opportunity to share my thoughts about the complete event with the Philadelphia jamat a few days later at the invitation of the mukhi. During that talk I also read out the scripture excerpts from Brown’s programme booklet. Alas, the diskette with the hard-copy of my speech is in storage and not easily accessible.

The following morning on Monday, 27th May, bagpipers, highland drummers, marching bands and more than 5,000 graduates, alumni, faculty, parent educators and University guests marched in a mile-long procession that announced Brown University’s 228th Commencement exercises, in  one of the largest and most colorful academic pageants in the nation.

By approximately 11:45 all the three groups – the medical students, graduate students as well as undergraduates – had returned from their separate convocations for the University Ceremony on The College Green.

May 27, 1996: A section of the large crowd witnessing the University Ceremony at Brown University’s “Green.” The Honorary Degree recipients, including the Aga Khan, are on the stage in the distant. Photo: Malik Merchant

In the meantime I wandered around the Green, enjoying and soaking in the lively atmosphere. Near one end of the Green I spotted Mansoor Saleh, a class-mate from my 1964 primary school days in Dar-es-Salaam. He was with the Council for USA. I was meeting him after several years, and I greeted him with immense enthusiasm and excitement, not knowing who was around us. A few moments earlier I had seen Princess Zahra Aga Khan and Prince Rahim Aga Khan, and I asked Mansoor where Hazar Imam might be. He asked me to turn to the left, and there standing just a few metres away was Mawlana Hazar Imam in the company of other distinguished individuals, who were also going to be conferred with honorary degrees. I should have been a little quieter in greeting Mansoor, I thought to myself! But then it was a meeting of brothers after years, I said to myself. Wouldn’t my Imam feel happy at that very warm brotherly encounter and greeting?

Dozens of academic staff passed by in the University’s regalia, and many stopped to greet Mawlana Hazar Imam and other dignitaries. I saw President Shams Kassim-Lakha, in his elegant Aga Khan University regalia, approaching Mawlana Hazar Imam and readied my camera to click them together. But a person blocked the scene, and I was momentarily delayed. I clicked as soon as the person had passed. I was uncertain about the shot I had taken and who might be in it. This wasn’t a digital camera – the film had to be sent to the lab to be processed! Everything happened too swiftly.

I thanked Mansoor, wished him goodbye, and proceeded to the back of the Green to watch the University ceremony during which President Vartan Gregorian presented special awards and honors as well as conferred honorary degrees to Mawlana Hazar Imam and eight others – namely Mary Chapin Carpenter, Edward D. Eddy, Timothy Forbes, Agnes Gund, Arthur Mitchell, Sandra Day O’Connor, Itzhak Perlman and James Wolfensohn. Flags from more than 50 nations, representing the homelands of the Class of 1996, were flown during the University ceremony which was filled with thousands of people. When Mawlana Hazar Imam was presented with the honorary degree, President Vartan Gregorian prompted the gathering to give him a special ovation.

A truly memorable event had come to an end. I returned to Philadelphia, and my first action was to submit the cameras for processing. I was quite clear about the contents of dozens of photos that I had captured, with the exception of one.

THE TREASURED PHOTO – please click for enlargement. Mawlana Hazar Imam, His Highness the Aga Khan, with other honorary degree recipients before the ceremony at “The Green” at Brown University, 1996. Photo: Abdulmalik Merchant.

I soon collected the processed prints, and started flipping through the photos, which were essentially of average quality. I felt satisfied considering I had used a very rudimentary camera, a disposable one. Then as I neared the end of the second set of prints, I realized that President Shams Kassim-Lakha had been too fast for my shutter speed. I brought the photo closer to my eye. It filled me with immense joy and happiness. I didn’t know that the camera had harmoniously coordinated with other forces to capture the image. Either by fluke or providence this (‘posed’) photo of Mawlana Hazar Imam is one that I will cherish and treasure throughout my life.

Please click on image to read complete "Thank You" Letter.

Note to Readers: Please scroll down or click  Home page for other recent posts and click What’s New for links to all articles published on this blog since March 2009. Subscribe to this Website via the box near the top right of this page.

Previous post: A Thank You Letter to Prince Sadruddin Aga Khan – “A Man of Multiple Visions” by Mohezin Tejani 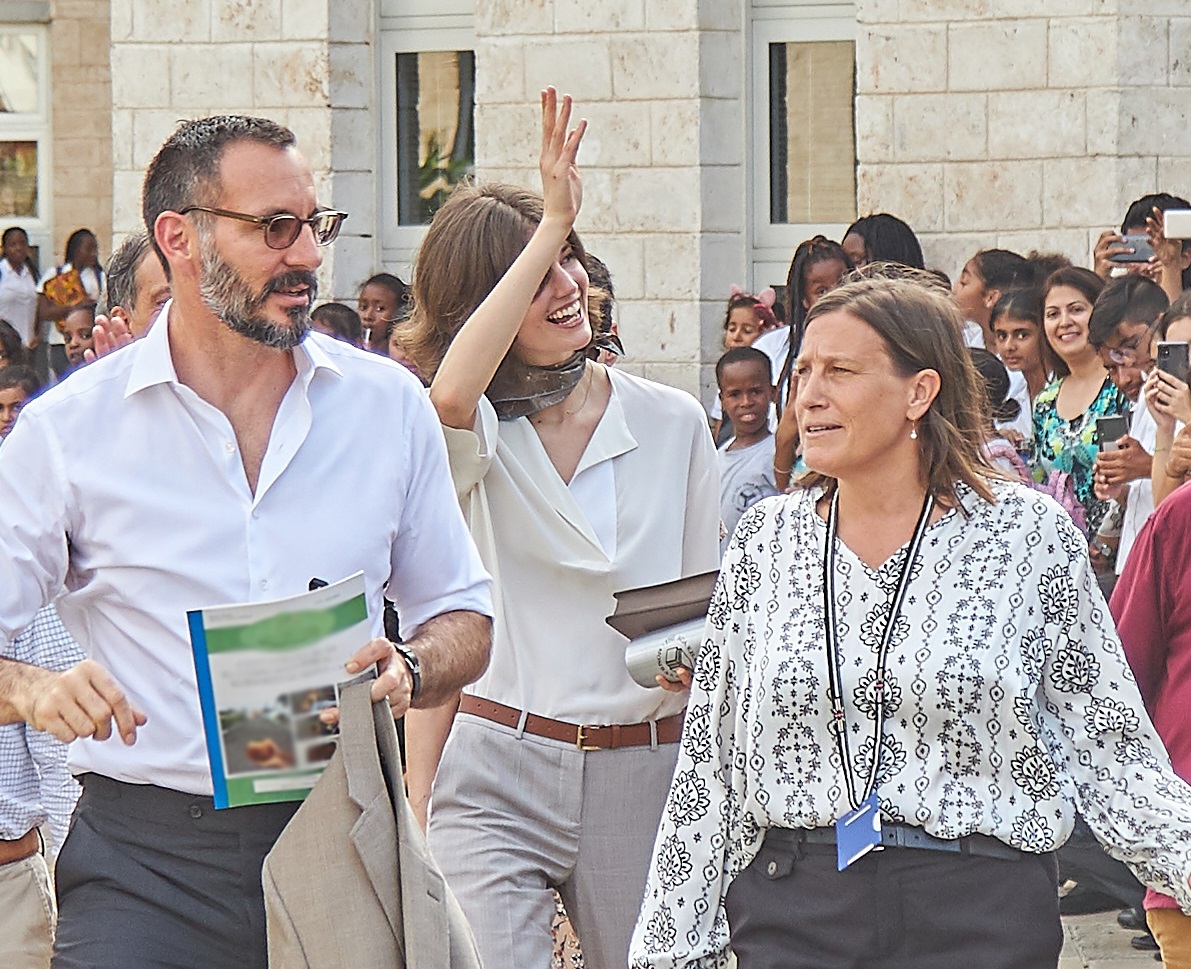 Traditions of the Prophet Muhammad on the Pumpkin, as the Aga Khan Museum Uses it to Decorate its Courtyard

Short Videos: Ismailis Keep Unique Culture Alive on Roof of the World; and 2 Canadians Bike Through Wilderness of the Pamirs